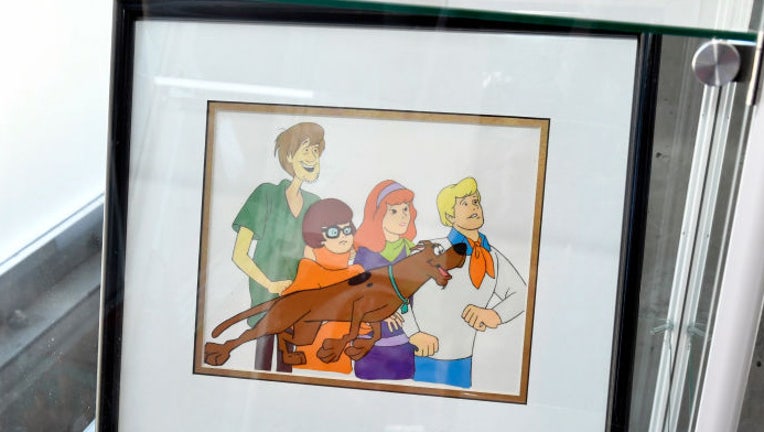 FILE-Vintage "Scooby-Doo" animation cels belonging to the late Casey Kasem are displayed at a press preview prior to a March 17 auction of items from the collection of Jean and Casey Kasem at Julien's Auctions on March 14, 2022 in Beverly Hills, Cali

One of the characters in the "Scooby-Doo" animated franchise had her oft-debated sexuality revealed before the release of the new Halloween special, "Trick or Treat Scooby-Doo!"

A new clip from the animated film released on Twitter Tuesday reveals Velma has a crush on another character named Coco Diablo.

The clip shows Velma’s first encounter with the villain Coco Diablo. Velma’s eyes light as she blushes when she sees Diablo.

"I’ve been watching Scooby-Doo as far back as I can remember, and as such, I can freely say that I DON’T CARE what Velma’s sexuality is. Straight, Bi, Gay, Asexual, etc. it doesn’t matter. Just enjoy the franchise," one fan tweeted Tuesday.

Another person tweeted "Hooray for Velma!"

Variety cited a now-deleted tweet from 2020 from film director James Gunn where he explains his attempt to write Velma’s character as a lesbian in his first script for the live-action Scooby-Doo movies but shared that Warner Bros. didn’t want to use it.

Yahoo reported Wednesday that Tony Cervone, a former supervising producer on the "Scooby-Doo! Mystery Incorporated" series previously confirmed Velma’s sexual identity but stated they couldn't show it in the film.

The news outlet referenced a deleted Instagram post from Cervone in 2020 during Pride Month where he wrote in part that Velma is gay and the plan was for her and another character Marcie to be a couple.

Cervone shared a separate Instagram post on June 28, 2020, featuring an image of Marcie and Velma standing next to each other with a rainbow background and the word "Pride" written below.

He wrote "Marcie and Velma - Mystery Incorporated. I obviously don’t represent every version of Velma Dinkley, but I am one of the key people that represents this one. We made our intentions as clear as we could ten years ago. Most of our fans got it. To those that didn’t, I suggest you look closer. There’s no new news here."

"Trick or Treat Scooby-Doo!," is now available on Prime Video.