LOS ANGELES - Vanessa Bryant, the widow of NBA legend Kobe Bryant, has shared a 12 page document revealing the names of the deputies who took and shared photos of the fatal helicopter crash that took the life of Kobe, their daughter Gigi and seven others.

According to the court document Bryant shared on Instagram Wednesday evening, the deputies who responded to the crash scene ‘used personal cell phones to take and share gratuitous photos of dead children, parents and coaches’.

The document states that a sheriff’s department investigation shows that one deputy took between 25 to 100 photos of the crash scene. The photos had no ‘conceivable investigatory purpose and were focused directly on the victims’ remains’.

Bryant is suing Los Angeles County Sheriff Alex Villanueva and his department over the shared photos. 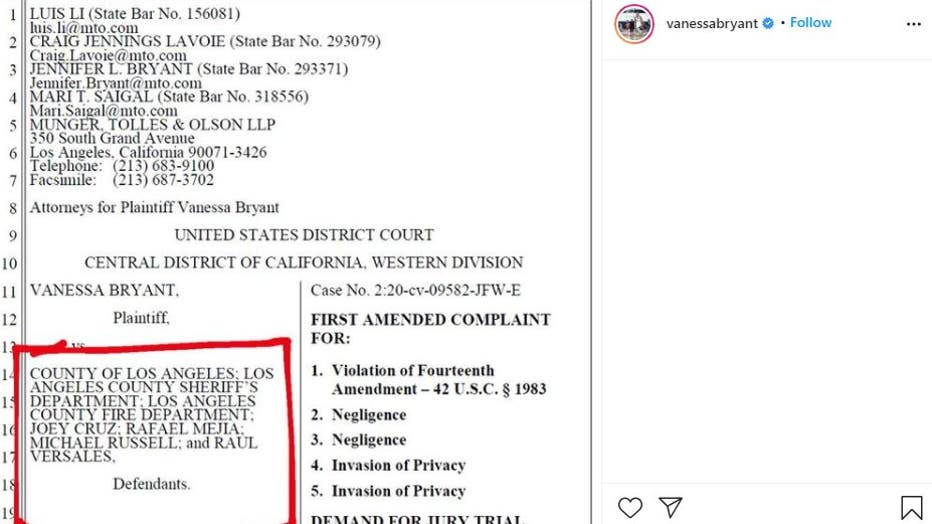 The document she posted details the actions of each deputy the morning of the crash.

The document states that Raul Versales, a deputy with the sheriff’s department responded to the scene on January 26, 2020 and stationed himself at the makeshift command post at the Los Virgenes Water District. While there the deputy "obtained multiple photographs of Bryants’ remains, stored them on his personal cell phone, and shared them with several other department personnel, including Rafael Mejia".

According to the document, Versales acknowledged sending crash scene photos to other members of the department and claimed the purpose of sending the pictures were to "answer the questions regarding color, numbers, and identifying features of the aircraft as well as crash scene details". The document says Versales’ purpose of sending the pictures to identify the helicopter was false.

Deputies who shared Kobe Bryant crash pictures can be named

A federal judge has ruled that Vanessa Bryant can get the names of the four Los Angeles County deputies accused of sharing photos of the crash scene that killed her husband Kobe, the couple's daughter Gianna and seven others.

When Deputy Rafael Mejia responded to the scene he stationed himself at the Los Virgenes Water District. While on his shift, he obtained multiple photos of Bryants’ remains and stored them on his personal cell phone, according to the lawsuit. The lawsuit states that Mejia then shared the photos without any legitimate governmental purpose.

When Deputy Michael Russell responded to the area he was staffed at a checkpoint at the base of the hillside that led to the downed helicopter. The lawsuit says Russell heard rumors that photos of the accident were circulating among other deputies and "was curious to see them himself." The court document states that Russell asked Cruz to send him the photos. He then saved the photos in his phone’s photo album, according to the document.

Documents show that Joey Cruz was a trainee deputy with the department and responded to the general area of the accident that January morning. Documents say that at some time during his shift Cruz obtained photos of Bryants’ remains. "After obtaining photos of the Bryants’ remains, Cruz shared them with multiple individuals without any legitimate governmental purpose, including several members of the public," the document states.

The posted document states that none of the deputies had any role in investigating the accident of identifying those in the crash and therefore had no reason to share the photos.