Serena Williams eliminated No. 2 seed Anett Kontaveit 7-6 (4), 2-6, 6-2 in the U.S. Open’s second round to ensure that she will play at least one more singles match at what she’s hinted will be the last tournament of her illustrious career.

Serena Williams can call it "evolving" or "retiring" or whatever she wants. And she can be coy about whether or not this U.S. Open will actually mark the end of her playing days. Those 23 Grand Slam titles earned that right.

If she keeps playing like this, who knows how long this farewell will last?

No matter what happens once her trip to Flushing Meadows is over, here is what is important to know after Wednesday night: The 40-year-old Williams is still around, she’s still capable of terrific tennis, she's still winning — and, like the adoring spectators whose roars filled Arthur Ashe Stadium again — she's ready for more. 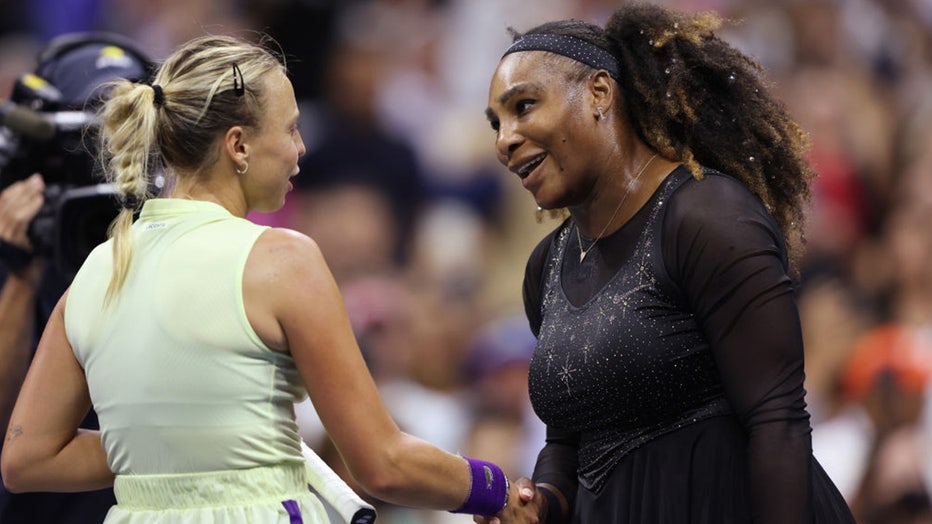 Serena Williams of the United States shakes hands after defeating Anett Kontaveit of Estonia in their Women's Singles Second Round match on Day Three of the 2022 US Open at USTA Billie Jean King National Tennis Center on August 31, 2022 in the Flushi

Williams eliminated No. 2 seed Anett Kontaveit 7-6 (4), 2-6, 6-2 in the U.S. Open’s second round to ensure that she will play at least one more singles match at what she’s hinted will be the last tournament of her illustrious career.

"There’s still a little left in me," Williams said with a smile during her on-court interview.

"This is what I do best," she added. "I love a challenge and I'm rising to the challenge."

Oh, is she ever. After beating 80th-ranked Danka Kovinic in straight sets Monday, then collecting her 23rd victory in her past 25 matches against someone ranked No. 1 or No. 2 against Kontaveit on Wednesday, the six-time champion at Flushing Meadows will play Friday for a spot in the fourth round.

Her opponent will be Ajla Tomljanovic, a 29-year-old Australian who is ranked 46th. They've never met. 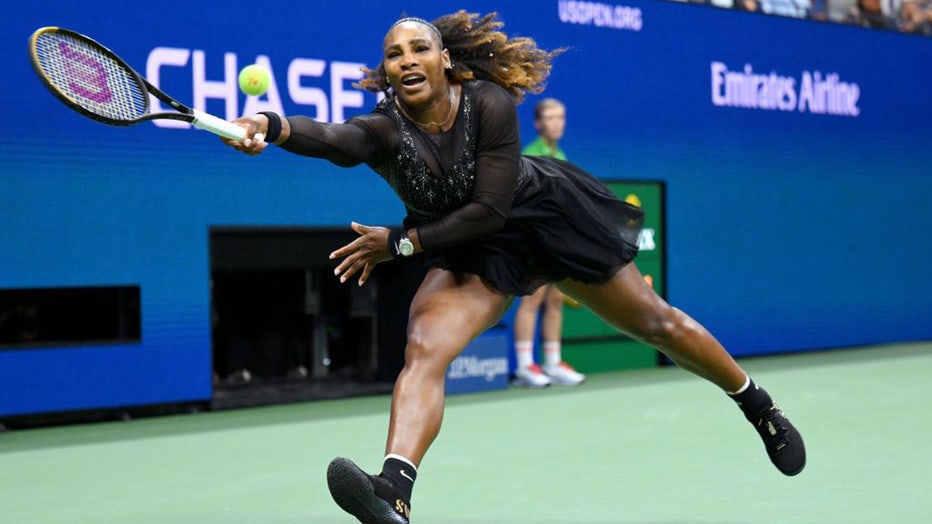 Asked how she's doing it so far, Williams replied with a hearty laugh: "Well, I'm a pretty good player."

She hit serves at up to 119 mph, stayed with Kontaveit during lengthy exchanges of big swings from the baselines and conjured up some of her trademark brilliance when it was needed most.

After pulling out a tight first set, then faltering in the second, Williams headed to the locker room for a bit of a break before the third.

Something had to give, someone had to blink.

When they resumed, it was Williams who lifted her level and emerged as the better player.

Just as she’s done so many times, on so many stages, with so much at stake.

"I'm just Serena. After I lost the second set, I thought, ‘Oh, my goodness, I better give my best effort because this could be it,’" Williams said, surely echoing the thoughts of every one of the people paying any attention.

"I'm super competitive. Honestly, I'm just looking at it as a bonus. I don't have anything to prove," she said, which certainly is true. "I never get to play like this — since ’98, really. Literally, I’ve had an ‘X’ on my back since ’99," the year she claimed her first Grand Slam title at the U.S. Open at age 17.

Whatever rust accumulated when Williams missed about a year of action before returning to the tour in late June at Wimbledon appears to have vanished. She lost in the first round at the All England Club to a player ranked outside the top 100 and was 1-3 in 2022 entering the U.S. Open.

Williams also has doubles to play, too. She and her sister, Venus, have won 14 major championships as a team and will begin that event Thursday night. 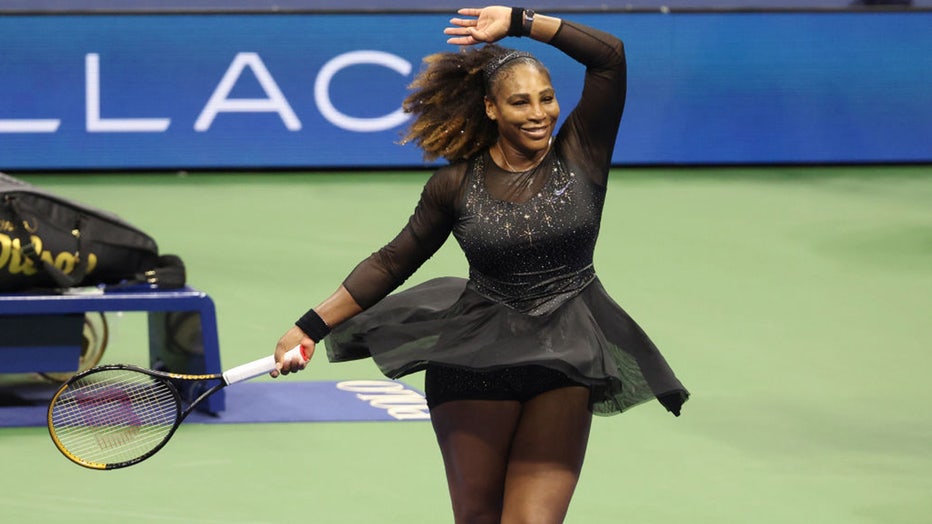 FILE - Serena Williams of USA celebrates her first round victory during day 1 of the US Open 2022, 4th Grand Slam event of the season at the USTA Billie Jean King National Tennis Center on August 29, 2022 in Queens, New York City.  (Jean Catuffe/Getty Images)

Kontaveit, a 26-year-old from Estonia, is a powerful hitter in her own right, the sort that spread across women’s tennis over the past two decades after a pair of siblings from Compton, California, changed the game.

But there's a big caveat attached to Kontaveit's ranking status: She has never won so much as one quarterfinal match at any Grand Slam tournament in 30 career appearances.

So maybe that's why, much like with Kovinic 48 hours earlier, Williams’ opponent was introduced just by her name, and Kontaveit walked out to a smattering of applause. Williams, in contrast, got the full treatment: highlight video, a listing of her many accolades and raucous roars.

When the players met at the net for the coin toss and pre-match photos, Kontaveit looked over at Williams with a smile. Williams glanced back straight-faced.

The match began with Kontaveit grabbing the first five points, Williams the next five. And on they went, back and forth. Kontaveit’s mistakes were cheered — even faults, drawing an admonishment for the crowd from chair umpire Alison Hughes about making noise between serves.

If anything, Kontaveit received more acknowledgment from the player trying to defeat her than anyone else, as Williams would respond to great shots with a nod or a racket clap.

Williams broke for a 5-4 edge when Kontaveit pushed a backhand long, spurring yelling spectators to rise to their feet — and Williams’ husband, Reddit co-founder Alexis Ohanian, jumped right in, too, waving his arms in her direction, a few rows in front of where Venus and Tiger Woods were two seats apart.

But with a chance to serve out that set, Williams briefly lost her way. A missed forehand. A backhand long. A backhand into the net as she went down on one knee. A double-fault made it 5-all.

Eventually they went to a tiebreaker, and at 3-3, a chant of "Let’s go, Serena!" broke out, accompanied by rhythmic clapping. Soon, Williams was delivering a 101 mph service winner and a 91 mph ace to seal that set. Just like old times.

To Kontaveit’s credit, she did not fold, did not let the disappointment of dropping that set linger.

Instead, she raced to a 3-0 edge in the second over the next 15 minutes on the strength of 10 winners and zero unforced errors.

In the third, it was Williams who gained the upper hand, and it seemed every point she won elicited an enthusiastic response. After a swinging forehand volley winner put Williams a game from victory, she raised both arms, then clenched her left fist.

One game, and five minutes later, it was over — and her stay at the U.S. Open could proceed.