The official spoke on condition of anonymity out of security concerns.

U.S. officials said the vehicle was carrying explosives and that the initial strike on Sunday set off secondary explosions.

The American officials said the bombers planned to attack Kabul’s international airport, where a massive airlift is still underway ahead of Tuesday’s deadline to conclude a massive two-week-long airlift of more than 114,000 Afghans and foreigners and withdraw the last of its troops, ending America's longest war with the Taliban back in power. 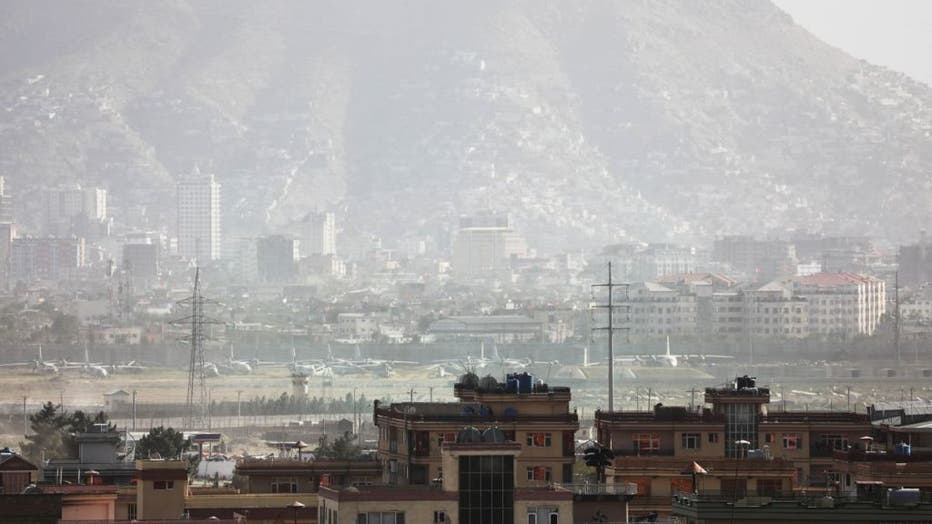 KABUL, AFGHANISTAN - AUGUST 27: A US plane is seen getting off as evacuation continues a day after explosion hits crowds outside the Kabul airport in Kabul, Afghanistan on August 27, 2021. (Photo by Haroon Sabawoon/Anadolu Agency via Getty Images)

Few details were immediately available following the strike, but two senior officials told the Associated Press the airstrikes were a success and said the vehicle carried multiple bombers.

"We are confident we successfully hit the target," said U.S. Navy Capt. Bill Urban, a spokesman for the American military's Central Command. "Significant secondary explosions from the vehicle indicated the presence of a substantial amount of explosive material.

He said the strike was carried out in "self-defense."

News of the airstrike came just minutes after news of a rocket striking a neighborhood near the Kabul airport. Afghan officials had initially reported the rocket attack separate from the drone strike but it turned out to be the same event.

Violence around the Kabul airport is on an uptick as of late. Afghans have flocked to the airport ever since the Taliban overthrew the government and assumed power. American troops have been facilitating a massive evacuation effort for most of the month.

On Thursday, a suicide attack at the airport claimed the lives of more than 160 Afghans and 13 American troops. ISIS-K, an affiliate of the Islamic State group, claimed responsibility for Thursday’s attack.

RELATED: US drone strike against ISIS-K in Afghanistan won't be the last, Biden says

He also acknowledged another terrorist attack was "highly likely" this weekend.

In a statement issued Saturday, Biden said he directed U.S. commanders to "take every possible measure to prioritize force protection, and ensured that they have all the authorities, resources and plans to protect our men and women on the ground."