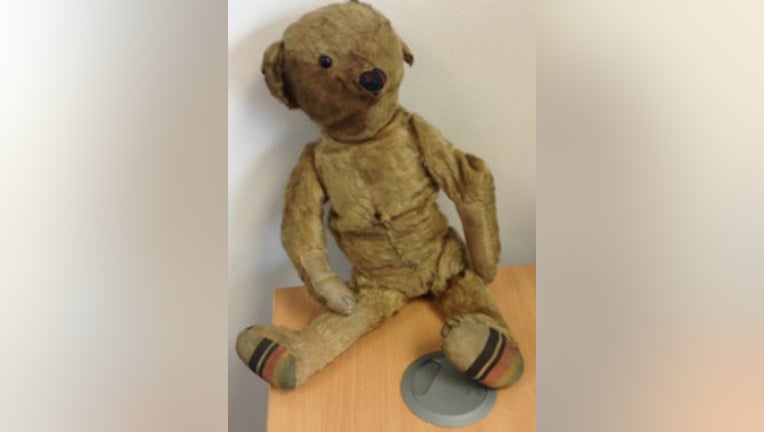 LONDON (CNN) -- His fur is worn in places, his nose is rather threadbare and he's a little saggy round the middle.

But staff at Bristol Airport in the west of England believe the elderly teddy bear left in the departure lounge more than a year ago, along with a photograph dated 1918, must have a loving family somewhere.

The picture, produced as a postcard from the studio of Dura Ltd., shows a teddy with two small children in light dresses. The older one, her hair tied in ribbons, has her arm around the bear.

On the back is written: "With dearest love and kisses to our darling Daddie from your loving little daughter & Sonnie. Dora & Glyn."

Airport staff were initially hopeful that the bear would be reclaimed, but so far no one has come forward.

Efforts by airport staff and police to trace its owners have also proved fruitless -- so now the airport is hoping the general public can lend a hand in solving the mystery.

"It is obvious the bear has been well loved for many years," said Jacqui Mills, a spokeswoman for Bristol Airport. "During the last 14 months we had been hopeful that the search would result in him being reunited to his family. We have not been successful in this search and have drawn a blank."

Since the case was publicized, history and teddy bear experts from as far afield as the United States and Canada have been in touch via e-mail to offer help in finding information, she said.

Some antique experts believe the teddy is a British-made Farnell Bear from the early 1900s. Others believe it could be either French or German.