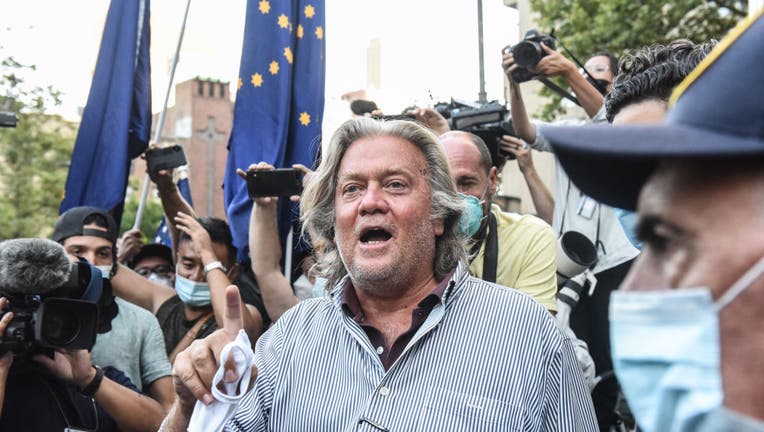 LOS ANGELES - A Twitter account associated with Steve Bannon, a former Trump adviser, was permanently suspended after it posted an episode from Bannon’s “War Room” show, in which he called for the firing of FBI Director Christopher Wray and Dr. Anthony Fauci, suggesting that they be beheaded for being disloyal to the president.

The episode was also removed from YouTube, according to FOX Business.

In the clip, Bannon falsely declared Donald Trump the winner of the 2020 election, despite the race not yet being called. “I actually want to go a step farther. I’d actually like to go back to the old times of Tudor England,” Bannon said in the now-deleted video. “I’d put the heads on pikes, right — I’d put them at the two corners of the White House as a warning to federal bureaucrats. You either get with the program or you are gone.”

As of Thursday, Bannon’s account was still active on Facebook, where the video calling for Fauci and Wray to be executed had been viewed nearly 200,000 times in 10 hours. Late Thursday, Facebook said it had removed videos of Bannon’s remarks for violating its policy on violence and incitement.

Trump has continuously sowed doubt over the integrity of the election process, making unsubstantiated claims that Democrats are trying to “steal the election.”

Supporters of US President Donald Trump staged protests outside the Maricopa County Elections Center and the Arizona State Capitol in Phoenix on November 4.

Many of his supporters, including Bannon, have joined Trump in pushing, without evidence, conspiracy theories regarding voter fraud as Americans wait for the final election results.

Social media companies have stepped up their efforts to stop the spread of misinformation about the election from Trump and his supporters.

Facebook on Thursday banned a large group called “Stop the Steal” that supporters of Trump were using to organize protests against the presidential vote count. Some members had called for violence, while many falsely claimed (https://apnews.com/article/election-2020-joe-biden-donald-trump-wisconsin-misinformation-013e89a828a01668ba3da6a2f6f91ca9) that Democrats are “stealing” the election from Republicans.

Though the group amassed more than 350,000 members before Facebook took it down, it was just one of several smaller groups that popped up as vote counting extended for days in several battleground states. Inside the groups, members and organizers tried to ensure they would get around Facebook’s moderators and “trolls” who might report or mock them.

“In line with the exceptional measures that we are taking during this period of heightened tension, we have removed the Group ‘Stop the Steal,’ which was creating real-world events,” Facebook said in a statement. “The group was organized around the delegitimization of the election process, and we saw worrying calls for violence from some members of the group.”

Facebook said it will continue to watch for activity that violates its rules and will take action if it does. As of Thursday afternoon, a copycat “Stop the Steal” group was growing steadily, nearing 13,000 members, and others were easily searchable on Facebook.

A day after Bannon’s incendiary comments, one of his lawyers announced that he would quit defending him in a federal fraud case.

In a letter dated Friday, defense attorney William Burck told a federal court judge in New York City that he was withdrawing from the case. He did not give a reason why. Reached by email, Burck declined to discuss the decision.

Bannon, 66, is facing charges he ripped off Trump supporters as an organizer of a group called “We Build The Wall” that portrayed itself as eager to help the president build a barrier along the U.S.-Mexico border. He has pleaded not guilty.