MILWAUKEE (WITI) -- Wisconsin lawmakers are gearing up for another push to get tough on drunk drivers.  As in years past, the package of bills set to be debated this summer includes one that would make drunk driving a crime on the first offense.  Wisconsin is the only state in the country where it is considered a civil violation the first time you are convicted.

Past efforts to criminalize drunk driving on the first offense have gained little traction in Madison.  Some say it's because of lobbying efforts by restaurant and tavern organizations and the alcohol and beverage industry.  Others say it has more to do with the state's overall culture of alcohol consumption.  Whatever the reason, drunk driving remains a civil offense in Wisconsin -- until you get caught twice. 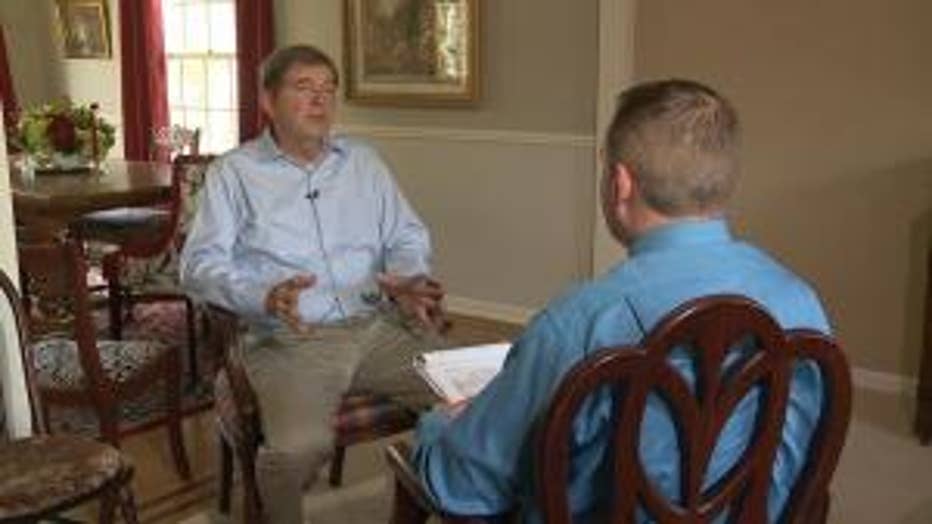 State Representative Jim Ott is sponsoring a bill that would criminalize OWI on the first offense if the driver's BAC is 0.15 or higher.

Ott is trying what many other lawmakers before him have tried -- and failed -- to do.  He wants to criminalize the first offense.  However, he's going for a compromise of sorts.  Instead of making it a crime for all drunk drivers, Ott's Assembly Bill 68 would only make drunk driving a crime for first time offenders if their blood alcohol concentration registers 0.15 grams of alcohol per 100 milliliters of blood (or per 210 liters of breath).  That's nearly twice the normal standard for drunken driving of 0.08 grams/100mL.

In other words, Assemblyman Ott is pushing to make drunk driving a crime on the first offense, but only if the driver is excessively drunk.

"You can`t say anymore that this is having one extra beer," Ott explains.  "This is somebody who drank a lot and may have trouble walking let alone driving a car."

Still, the change in the law would affect tens of thousands of drivers convicted of operating while intoxicated (OWI).  That's because more than 30,000 drivers are convicted each year in Wisconsin of an OWI-related offense.  Most of them are first time offenders.  Many of them have BAC's above 0.15. 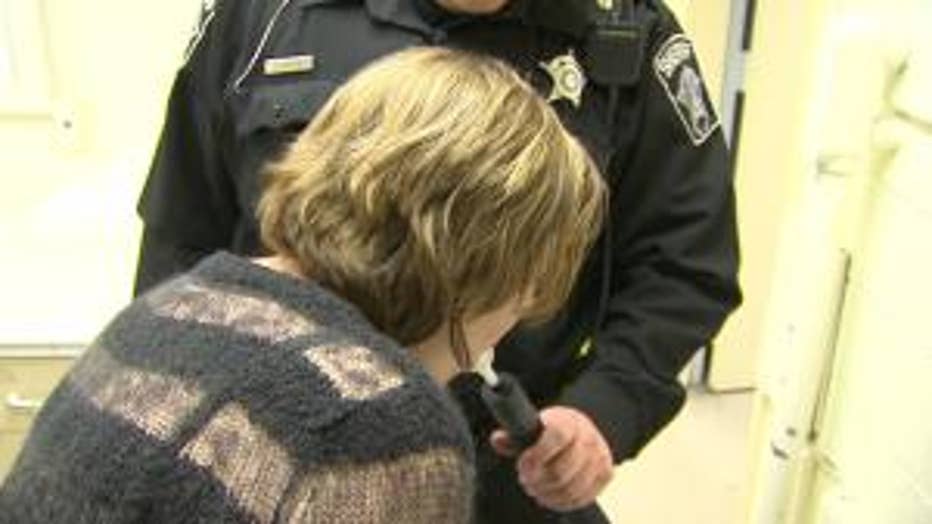 A suspected drunk driver takes a breath test in the Intoximeter room at the Milwaukee County Sheriff's Substation in Wauwatosa.

To illustrate the point, the FOX6 Investigators spent a Saturday night in April inside the Intoximeter room at the Milwaukee County Sheriff's Office substation in Wauwatosa.  That's one of three places deputies take those suspected of driving drunk to have their breath tested for alcohol concentration.

"That will be the most difficult of the bills to get passed," Ott said.

It's not just controversial among voters, lobbyists or lawmakers, though.  It's a concern for prosecutors.

"I hate to use the word problematic, because it could be worse than that," said Ron Dague, Milwaukee County Assistant District Attorney.  Dague is one of the state's most experienced drunk driving prosecutors.  He says Ott's 0.15 bill would likely mean a large increase in the number of defendant's who contest their cases, since the average BAC of drivers arrested in Wisconsin is 0.17. 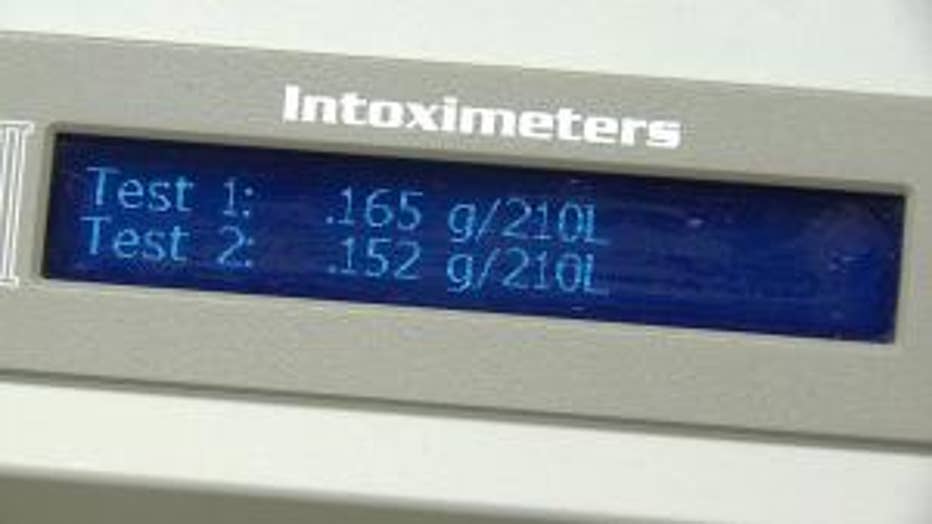 The average drunk driver arrested in Wisconsin has a BAC of approximately 0.17 (source: Wisconsin DOT)

"There's another incentive for the defense to attack those cases to try to shave just a little bit off," Dague said.

That's especially true, he says, since it would mean the difference between a traffic ticket and a criminal record.

"Certainly with harsh criminal penalties there will be a lot more incentive to fight cases," said Andrew Mishlove, a defense lawyer who specializes in fighting OWI charges.

Mishlove is especially critical of the state's blood testing program, arguing that it doesn't require anyone in the blood testing process to record the expiration date of the vacuum-sealed vials used to collect blood samples for testing.

It's an argument his law firm made last month in defense of Susan Belmore, a driver involved in a traffic accident in Franklin.  Belmore's blood registered a staggering 0.24 g/100mL -- more than three times the legal limit.

When police arrived on the scene of the crash, they say Belmore was confused and didn't answer questions normally.

"I asked her for a drivers license," a police officer testified at trial, "at which time she handed me a Target Visa Card."

Belmore is a diabetic and - at the time of the crash - her blood sugar was dangerously low, according to a paramedic who responded to the scene.  Rescue workers injected her with a 50% dextrose and water solution to bring her blood sugar up to normal. 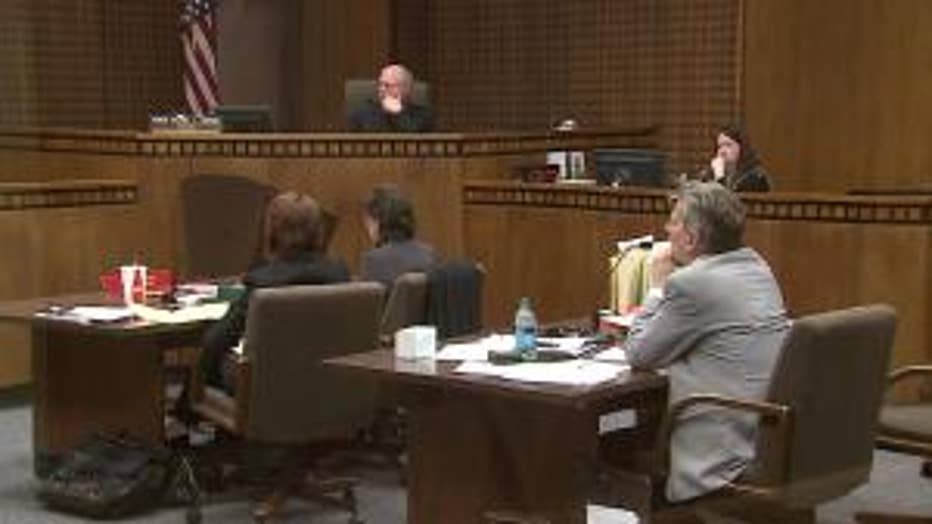 Defense claimed Susan Belmore's 0.244 BAC was possibly caused by fermented yeast which reacted with sugar water that was injected after a traffic accident to combat a diabetic attack.

yeast that could have contaminated the vial used to sample her blood for testing, since no one recorded the expiration date of the vial.  A doctor who testified for the defense said the yeast - called candida albicans - is all around us.

"It requires glucose to grow.  And when it grows it gives off a byproduct.  And the byproduct it gives off is ethyl alcohol - the same kind of alcohol that we drink," said Dr. Jimmie Valentine, the expert witness called by the defense.

It's a strategy Mishlove calls the "fermentation defense."

"It's a wonderful theory," Dague said.  "But it's not supported by any clinical tests or any practical experience done in the labs in Wisconsin."

Dague challenged the theory in Belmore's case and the jury convicted her of OWI - her third offense.  But that's hardly the only theory Dague has to be prepared for.

She's a defense expert for hire.  She's also a former chemist for the Wisconsin State Patrol.

"I don't want drunks on the road anymore than anyone else," McMurray said.  "But I think people should be fairly convicted."

McMurray left her civilian job in the state patrol's chemical test section in 1994, and almost immediately became an expert witness for defense attorneys in OWI cases.  She is most often involved in helping drunk driving defendant's challenge the validity of their breath-test results.

"I think the jury has a right to know, that number - even though they give you a number - isn't an absolute!" 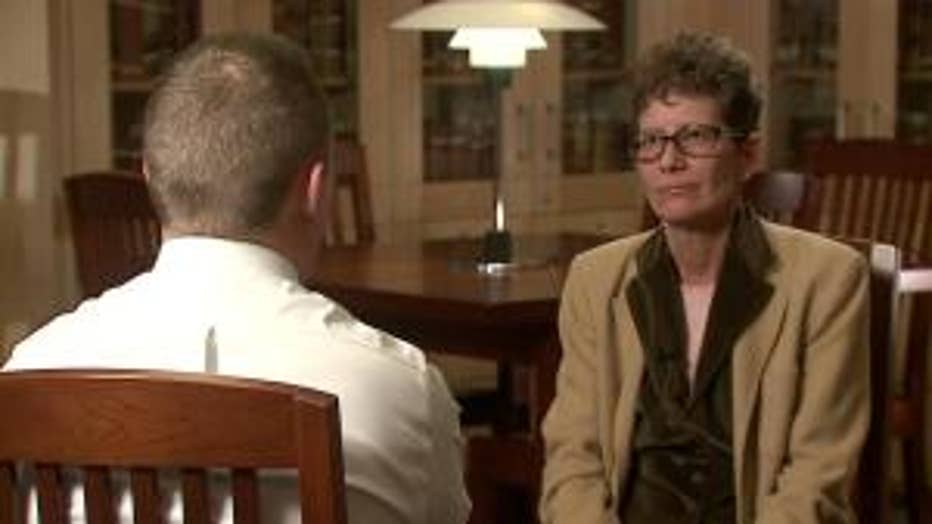 Mary McMurray, a former chemist for the WI State Patrol, is now a defense expert in OWI cases all over the country.

McMurray says all sorts of things can affect a test result from the person's body temperature to the use of an asthma inhaler to cell phone interference with the breath-testing machine itself.

Dague calls most of her theories "junk science."

"Many of the challenges raised by defense experts are based on either a misapplication of science principles or a misunderstanding of the law," Dague said.

Dague argues that the machines used in the state of Wisconsin -- the Intoximeter EC/IR-2 -- are accurate to within a margin of error of 0.005.  Even that error, he says, is accounted for by the way Wisconsin assigns a final test result.

In Wisconsin, a driver is required to give two breath samples on the EC/IR-2.  Each sample results in a reading that goes out to three decimal places.  Instead of averaging the two results, Wisconsin gives the driver the lower of the two and then drops the third digit, rather than rounding up.

Still, Dague said juries can be swayed by expert testimony, so prosecutors have to be prepared for it.

"This is the most complicated area of law and science that I've handled in my 22 yearcareer," Dague said.

And that is why Dague and Mishlove - enemies in the courtroom - agree on one thing.

"If the legislature is going to criminalize first offense," Mishlove explained, "they are also going to have to fund a lot more prosecutors, a lot more public defenders and a lot more judges."

" produce a deterrence to deter that behavior," Ott said.  "So that maybe some will think the penalties are getting too ridiculous for me to continue driving impaired and hopefully will change some behaviors."

Already, however, Ott is signaling that his effort to get tough on first time offenders with a high BAC stands little chance of passing this session.  He told me that - of the six drunk driving bills he is sponsoring - this is the most controversial.

He is hoping to get at least four of his six drunk driving bills passed this summer, including one that would make drunk driving a felony on the third offense.  Currently, drunk driving in Wisconsin is not a felony until the 4th offense -- and even then, only if all four offense occur within a five year period.