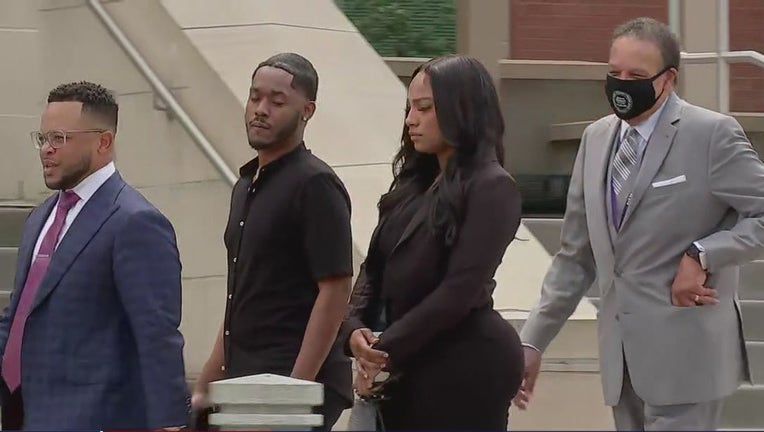 SUGAR LAND, Texas - Chet Hanks, the son of famous actors Tom Hanks and Rita Wilson, is now being sued for over a million dollars, for allegedly assaulting his ex-girlfriend.

On Tuesday, the lawyers representing Kiana Parker filed the lawsuit in Fort Bend County, where the abuse allegedly happened.

During a news conference, the attorneys representing Kiana Parker, the ex-girlfriend of Chet Hanks, announced a new civil lawsuit filed against the son of famous actors Tom Hanks and Rita Wilson.

Court documents accuse the younger Hanks of repeatedly physically and verbally abusing Parker during their 2-year relationship, which started in March of 2019.

"Chet Hanks repeatedly called our client a black b**** and other names. He repeatedly told our client he was going to blow her brains out. Repeatedly reminded our client that, I quote, "he was Chet Hanks, she wasn’t s*** and no one would believe her because she was a ghetto Black b****," shows to illustrate his mindset, his privilege," said Kevin Murray, Attorney representing Parker.

The lawsuit also points to a violent incident at their Sugar Land home on January 8 that lead to Parker calling police and a judge granting her a protective order.

According to a court affidavit, Parker was packing to move out following the couple’s break up, when, "Chet Hanks came in and put his hand on a knife that was laying on the (kitchen) countertop" and "began to come towards Parker."

She claims she picked up a pot, swung it in the air, dropped it, then ran outside and started recording.

Documents say Hanks got progressively angrier, followed Parker, grabbed her wrists, pushed her against the cars and wrestled her for her phone. And at one point, dragged her across the pavement by her arm, then destroyed her phone and took off.

"Even after all that, all the disrespect and all the things that Chet Hanks did, our client still wasn’t sure she should come forward, she was worried about her safety and said she was unsure," said Murray.

But from Hanks’ story, Parker was the aggressor. The actor/musician released a video last month, obtained by TMZ, where his face appears bloodied.

Hanks claims Parker stole more than $5,000 from him in a lawsuit he filed against her in California.

Sugar Land Police confirmed they were called to investigate an assault cause at the couple's house in January.

The Fort Bend County District Attorney's Office says they're now reviewing the case but so far, no charges have been filed.

FOX 26 reached out to Hanks’ attorney and manager, but so far, we have not heard back.