PHILADELPHIA -- The engine explosion aboard a Southwest Airlines jetliner puts new pressure on airlines and regulators to act faster to inspect the fan blades that may have snapped off and triggered the accident that killed a passenger.

The initial findings from investigators show that Tuesday's emergency was eerily similar to an engine failure on another Southwest plane in 2016. That breakdown led the engine manufacturer to recommend new inspections of fan blades on many Boeing 737s.

Investigators say a fan blade snapped off as Southwest Flight 1380 cruised at 500 mph high above Pennsylvania. The failure set off a catastrophic chain of events that killed a woman and broke a string of eight straight years without a fatal accident involving a U.S. airliner.

"This fan blade was broken right at the hub, and our preliminary examination of this was there is evidence of metal fatigue where the blade separated," NTSB Chairman Robert Sumwalt said. 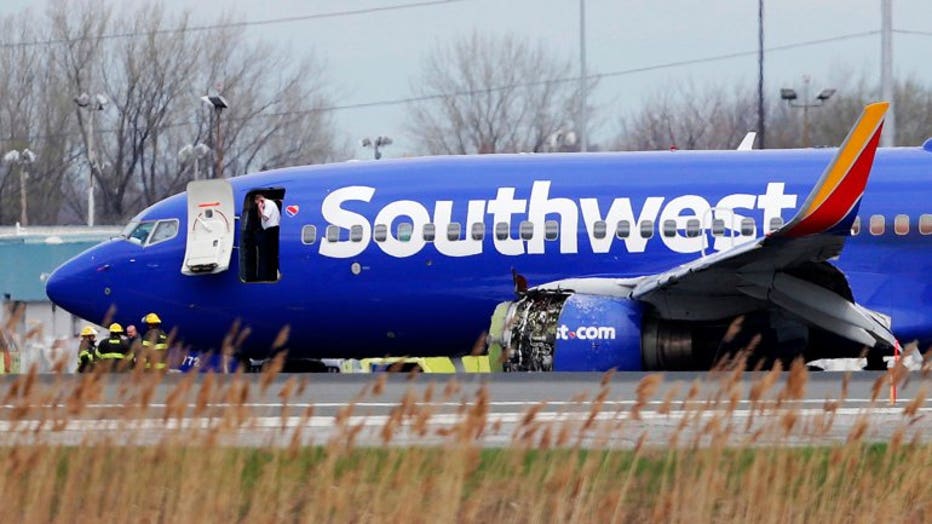 A Southwest Airlines plane flying from New York to Dallas had to make an emergency landing Tuesday morning in Philadelphia after one of its engines was damaged, according to the Federal Aviation Administration.

Sumwalt said he is very concerned about Tuesday's engine failure, but would not extrapolate that to the CFM56 engines or the entire fleet of Boeing 737s, the most popular airliner ever built.

On Wednesday, federal investigators were still trying to determine how a window came out of the plane, killing a woman who was seated in that row and wearing a seatbelt. No plastic material from the window was found in the 737, Sumwalt told a news conference.

Family members have identified the woman as 43-year-old Jennifer Riordan, a banking executive and mother of two from Albuquerque, New Mexico. Passengers say Riordan was partially sucked out of the window after the plane was hit by engine debris.

Investigators also said the plane landed at a much faster-than-normal speed because the pilots were concerned about losing control if they flew slower. 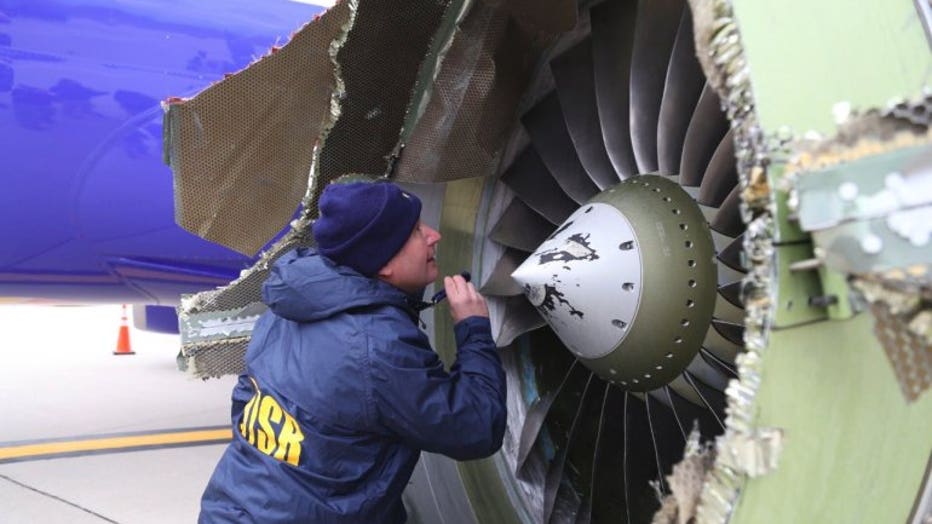 The National Transportation Safety Board is onsite inspecting a Southwest airline plane after engine failure caused the plane to make an emergency landing at Philadelphia International Airport.

The leading edge of the left wing was damaged by the shrapnel produced by the explosion at 30,000 feet, officials added.

Metal fatigue — microscopic cracks that can splinter open under the kind of stress placed on jetliners and their engines — was blamed for an engine failure on a Southwest plane in Florida in 2016. Both that plane and the jet that made a harrowing emergency landing Tuesday in Philadelphia were powered by CFM56 engines. 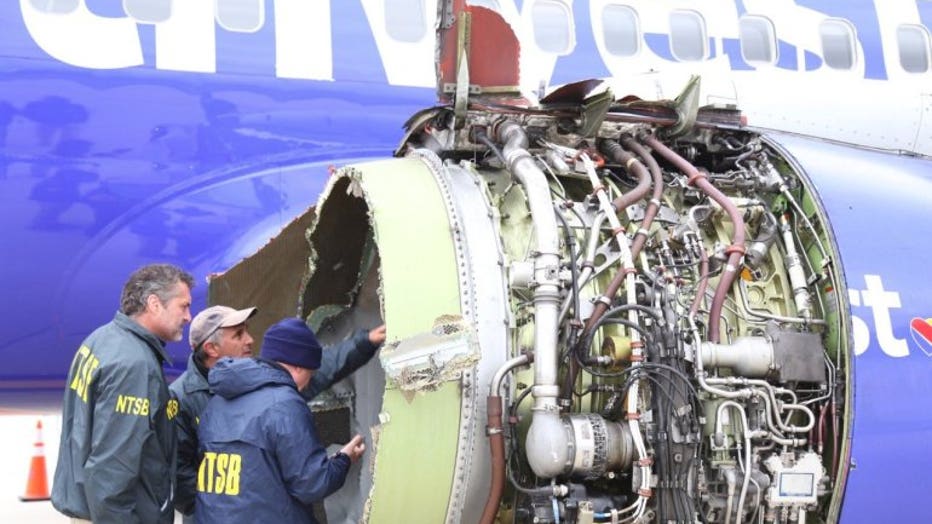 The National Transportation Safety Board is onsite inspecting a Southwest airline plane after engine failure caused the plane to make an emergency landing at Philadelphia International Airport.

Last month, European regulators required airlines flying in Europe to conduct the inspections that were recommended by CFM.

In the U.S., the Federal Aviation Administration proposed a similar directive last August but has not yet required the inspections.

The FAA proposal would have given airlines six months to inspect the fan blades on engines that had flown more than 7,500 flights, and 18 months on more lightly used engines.

It is unclear whether that would have forced Southwest to quickly inspect the engine that blew up. CEO Gary Kelly said it had logged only 10,000 cycles since being overhauled.

Critics accuse the FAA of inaction in the face of a threat to safety.

Robert Clifford, a lawyer who is suing American Airlines over another engine explosion that caused a fire that destroyed the plane, said the FAA should have required the inspections — even if it meant grounding Boeing 737s.

"There is something going on with these engines," he said, "and the statistical likelihood of additional failures exists."

The Southwest CEO protested that it is too soon to say whether Tuesday's incident is related to any other engine failures.

Kelly said Tuesday's plane had flown 40,000 cycles. A cycle is one takeoff and one landing. Boeing delivered the plane to Southwest in July 2000, meaning that if the plane has been in continuous use it has made about three flights a day.

Kelly said the plane was inspected on Sunday and nothing appeared out of order.

There are several types of inspections that airline planes must go through, ranging from an "A check," which is done about every eight to 10 weeks, to more-rigorous B, C and D checks.

A so-called D check is done roughly every six years for older planes, less frequently for newer ones. It can take weeks and involves taking apart much of the plane for inspection and possible repair or replacement of parts, then putting it back together. Engines are typically removed for work during a D check.

Southwest did not respond to repeated requests to make maintenance records for Tuesday's plane available to The Associated Press, but NTSB investigators were heading to Dallas to inspect the records, Sumwalt said.