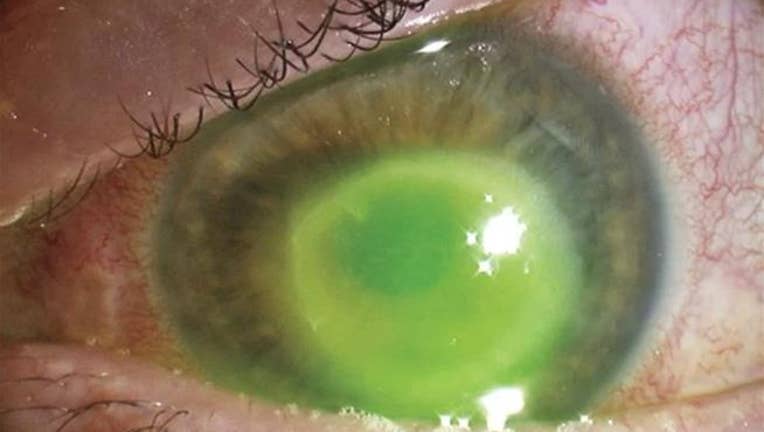 The woman’s eye, which appears green because of a dye used to detect cornea damage. (New England Journal of Medicine)

A scary reminder to wearers of contacts to take them out before showering or swimming.

Two UK patients were left legally blind in one eye after contracting a rare parasitic eye infection linked to water, reports Live Science. A 41-year-old woman described two months of pain, blurry vision, and light sensitivity in her left eye before doctors found a defect in her cornea, according to a report in the New England Journal of Medicine.

The woman was ultimately diagnosed with Acanthamoeba keratitis, a parasitic infection "most common in people who wear contact lenses," according to the CDC. It describes risk factors including improper handling and "swimming, using a hot tub, or showering while wearing lenses."

The woman eventually received a partial cornea transplant, which slightly improved her vision.

Nick Humphrey is awaiting the same procedure on his right eye. "If I get my sight back I'll never wear contacts again," the 29-year-old says, per Fox News. He contracted Acanthamoeba keratitis in 2018 after regularly showering with contact lenses.

"I'd wake up, pop my lenses in, and head to the gym before work, then I'd jump in the shower before heading to the office," he says.

He's working with charity Fight for Sight to warn others that this "can happen because of something as simple as getting in the shower." (More about the risks here.)