Making a Marine at boot camp in San Diego

Making a Marine at boot camp in San Diego

SAN DIEGO, Calif. -- Roughly 850 Wisconsin men will enlist in the Marine Corps this year. To earn the title of United States Marine, recruits must complete 13 weeks of boot camp. FOX6's Amy DuPont traveled to the "Recruit Depot" in San Diego, California to show you how Marines are made.

There are moments in life we never forget. If you’re a United States Marine, stepping into the iconic yellow footprints is one of them. “Receiving night” is the Marine Corps' welcome to recruit training and a small taste of what’s to come over the next 13 grueling weeks. 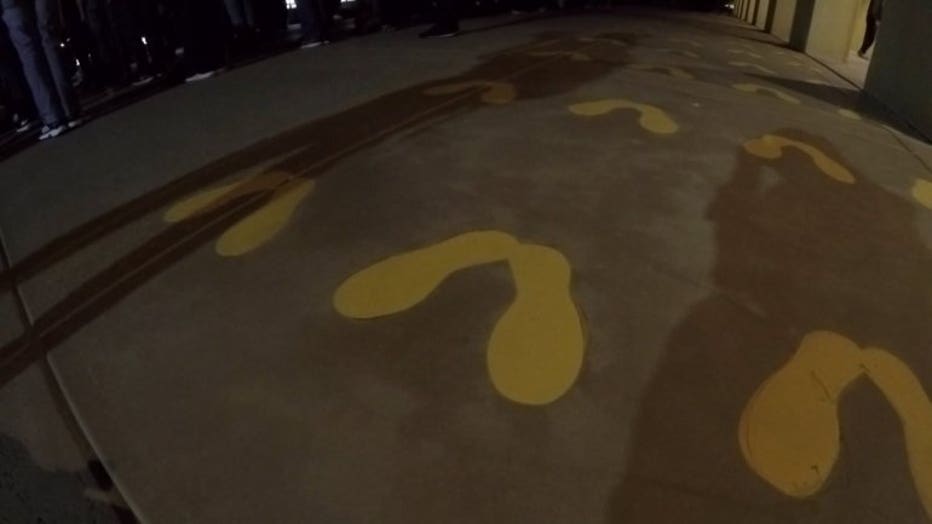 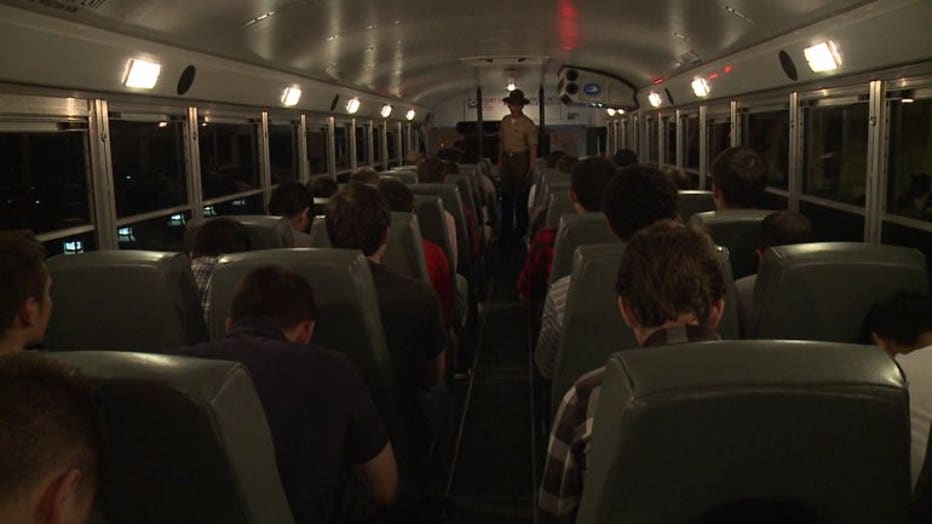 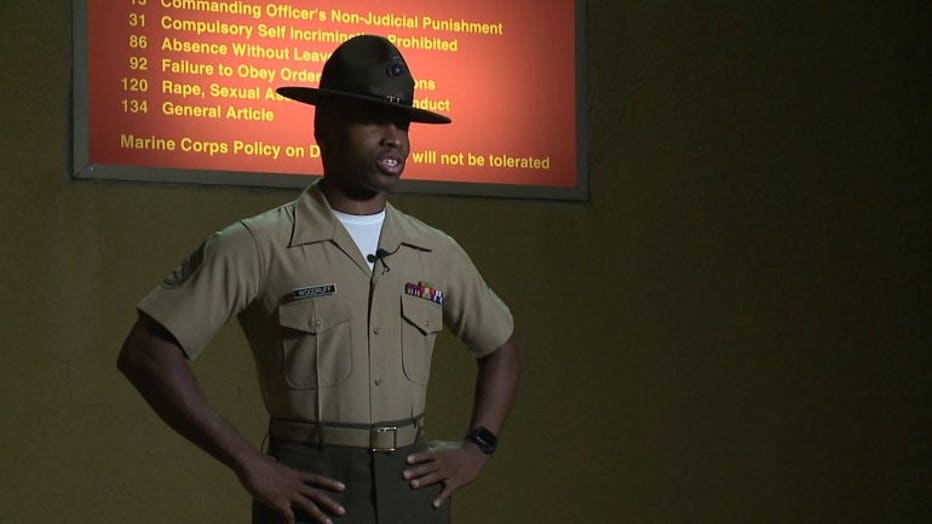 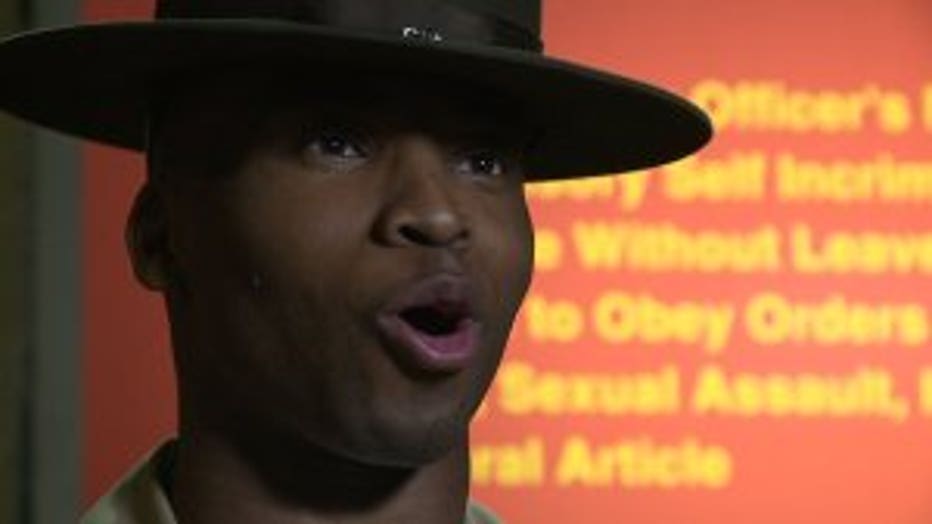 “That initial shock is to instill that discipline and let them know they are not in Kansas anymore. They are here at MCRD San Diego,” said SSgt. Trevor Woodruff.

Woodruff stood on the footprints eight years ago. He recalled thinking at the time that he joined the wrong branch. Now, it's Woodruff’s and the other drill instructors’ mission to train 17,000 men a year.

“Once they walk through that hatch, their civilian life is over and they will live a life dedicated to honor, courage and commitment -- and they will keep the traditions of the thousands of Marines that came before them," said Woodruff.

The only thing a recruit can keep during boot camp is religious scripture. He’s stripped of everything, including his hair and his sense of self. After calling home to say he made it to base, he is not allowed to say “I” again, referring to himself only as “this recruit." 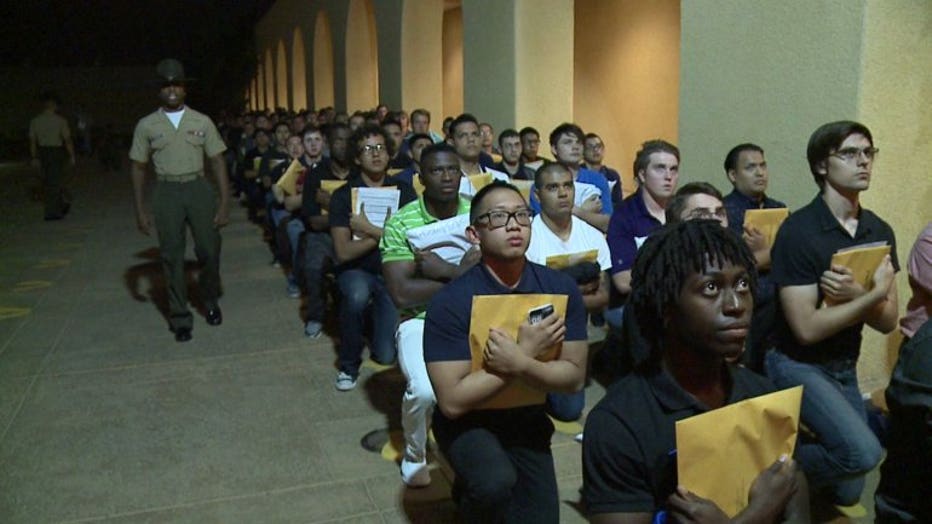 The screaming never ends. Intended to weed out the weak, only recruits with a fighting spirit and confidence rise above the chaos.

“Everything ties into discipline. They need to do what we tell them to do, because out in combat, when we say 'duck,' you (a Marine) don't say 'who, what, when, where, or why.' No. You duck right then and there," said Woodruff. 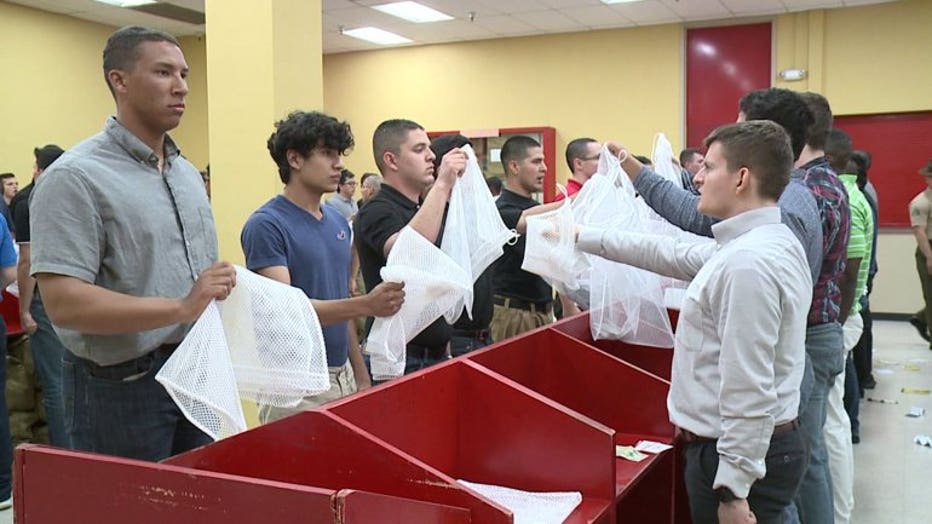 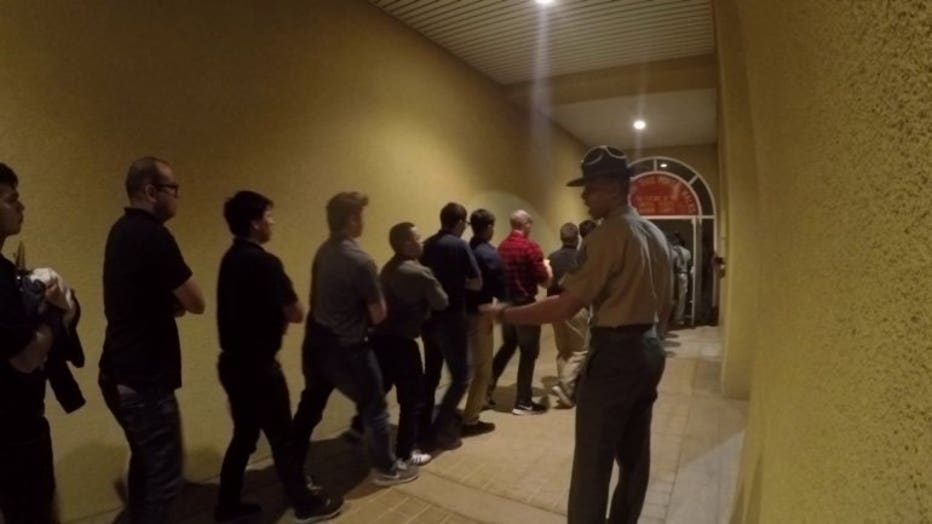 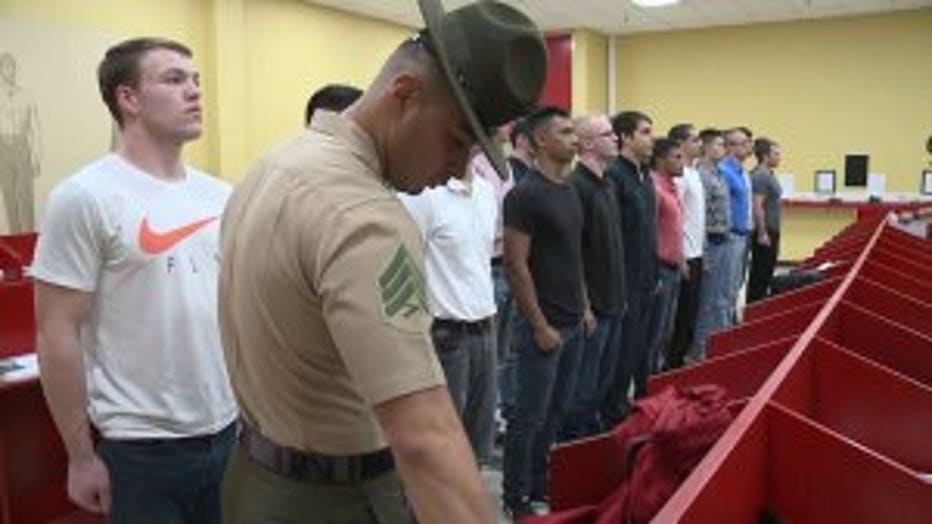 “Everybody wants to be around Marines because they know wherever we are, nobody wants to mess with us, but the only way we can do that is by putting in the work," said Gonzalez.

Every crunch, every mile, every obstacle is designed to prepare them for a life on the front line. If a recruit wants to quit, his drill instructor will not let him.

“My job is to make them push themselves harder than they’ve ever pushed themselves because when you come into a combat situation, you have to push your body beyond what you think your natural limits are," said Sgt. Gordon Starr. 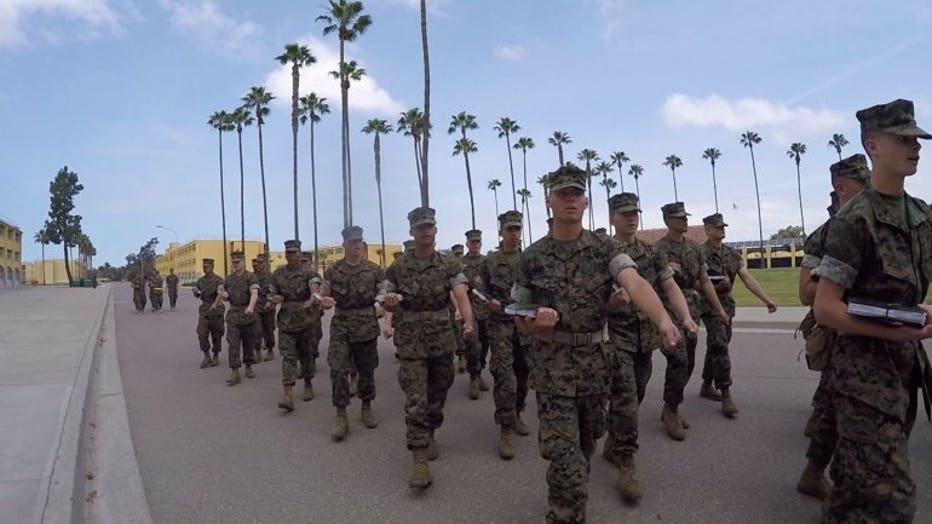 No point of boot camp is more intense than “The Crucible," the final test of recruit training. Only recruits that make it through earn the title of Marine. The three-day, 40-mile continuous march includes team obstacles and individual challenges, like how to ration two meals over the course of the event. 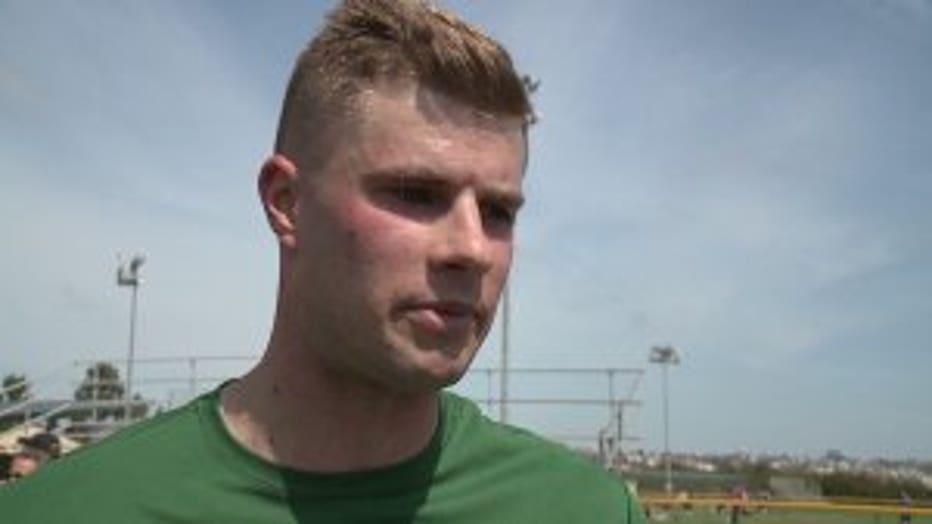 By the time he reached the last hill, appropriately named “The Reaper," Sheboygan native Zach Schramm was starving and exhausted. He kept climbing.

“You go up the big hill with your day pack and main pack. Seventy to eighty pounds on your back. You’re going up this big hill. You just have to keep saying 'one foot in front of the other,'" said Schramm, 20.

Schramm made it all the way to the top, where he and the rest of the recruits in his company earned the right to call themselves United States Marines. 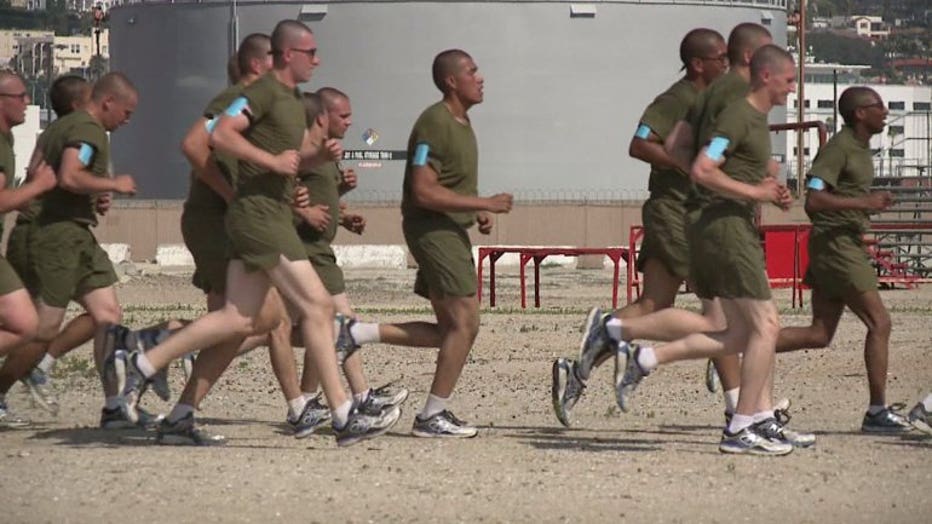 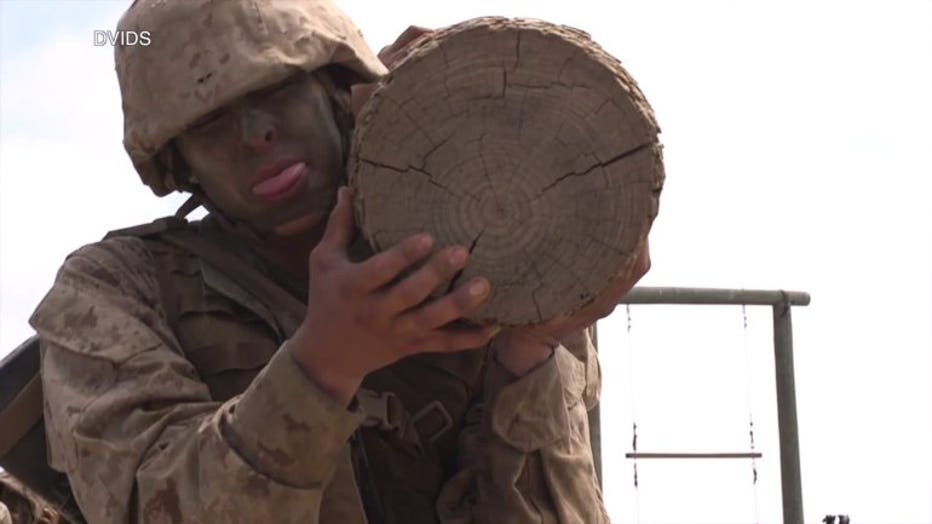 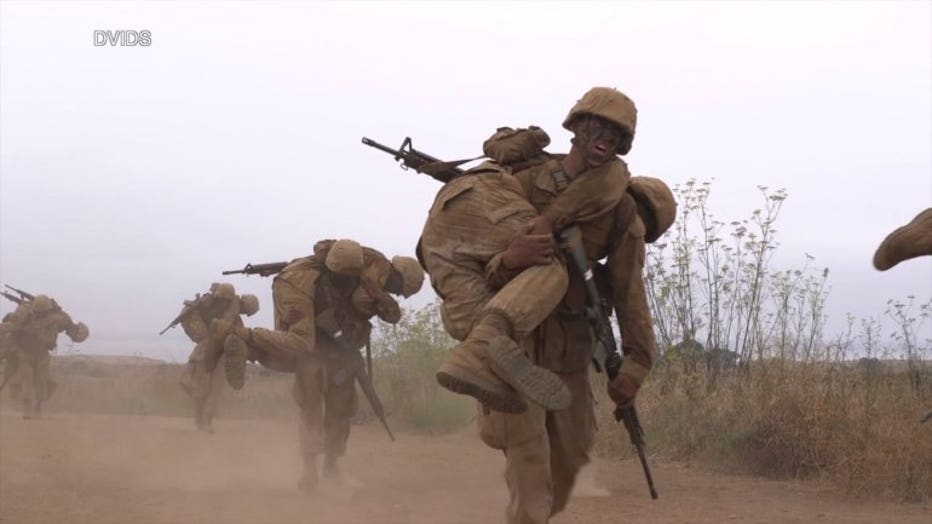 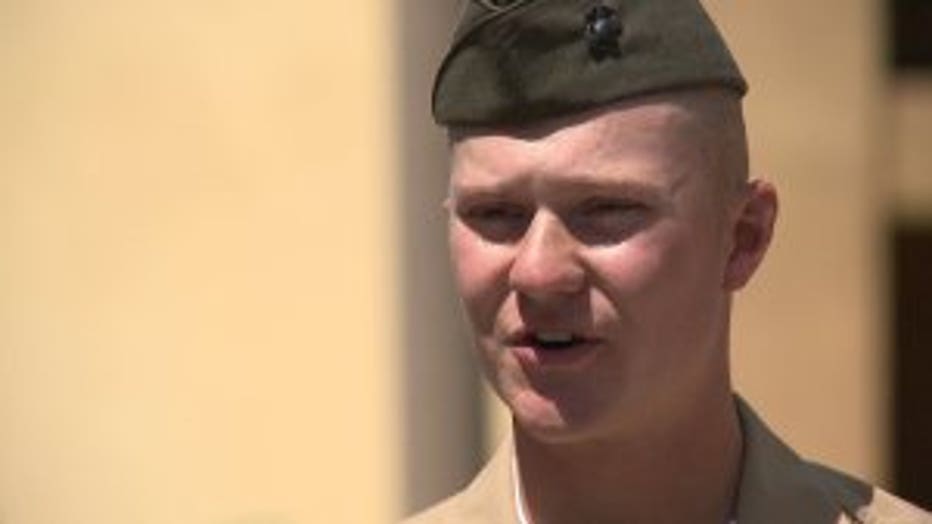 “Being here today to say 'I did it -- I am a United States Marine,' that’s something that I earned, and no one can take away from me," said Schramm.

When they stepped onto the yellow footprints three months ago, the task before them seemed nearly impossible. Recruit training was tougher than they expected, but so were they.

The Marine Corps prides itself on having the longest, and arguably toughest boot camp of all the military branches. Their training is also incredibly successful. Only 5 percent of recruits drop out. 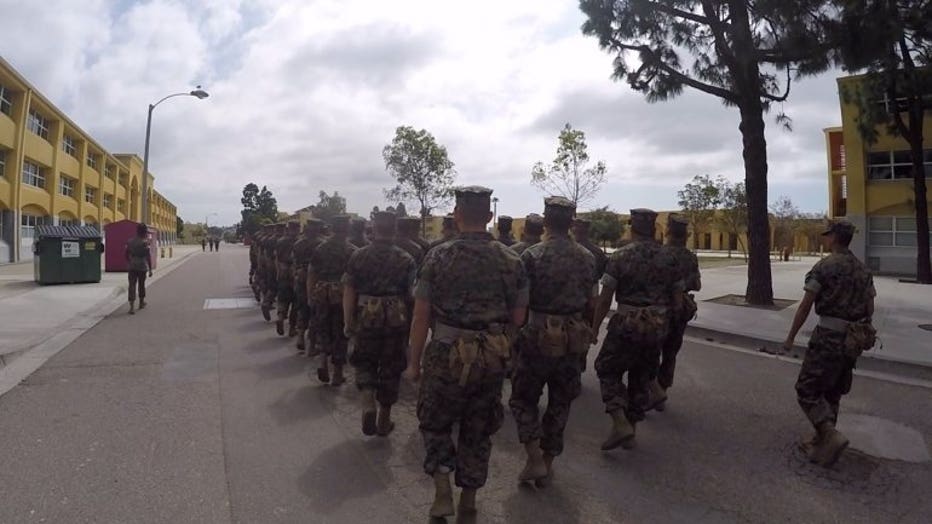 This story holds special meaning for Amy DuPont. Her husband is active duty. He's stationed in Milwaukee as a recruiter.