On Monday, a photo that showed a "terrible" Elsa cake went viral after it was posted on Reddit and shared thousands of times on Facebook and Twitter. However, the real story behind the cake is heartwarming. 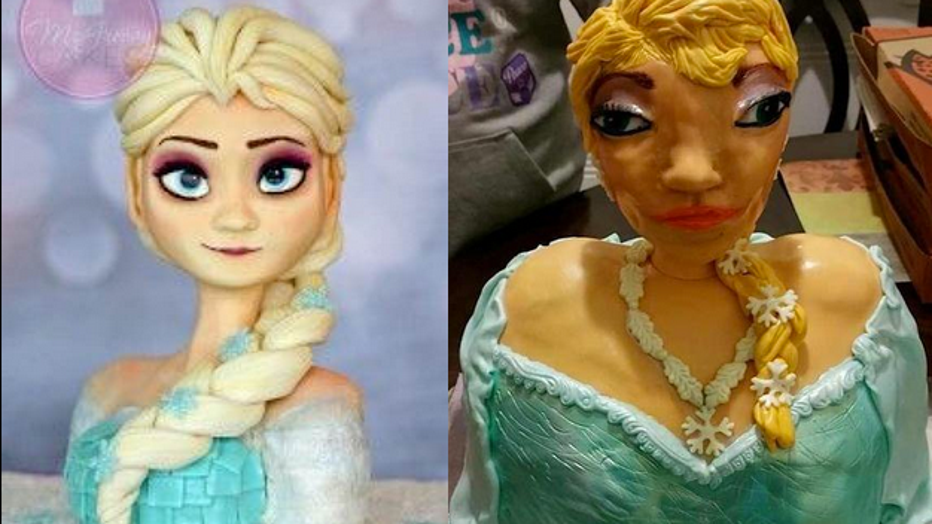 The image of an ordered/arrived Elsa cake being shared on social media.

The "terrible" cake was made by a volunteer for Icing Smiles, a charity that creates cakes for sick children.

Icing Smiles posted on Facebook about the "Elsa" cake:

"My heart broke for the baker because I know how much of herself she puts into her donations. My heart broke for the family should they come across the posts because it may take from their joy of receiving the gift. It broke for our team whose extraordinary efforts were used in this way. Our Sugar Angel wasn't commissioned to copy Shawna's work, she was asked for a Frozen cake for a sick child and she did just that."

Lisa Randolph-Grant, who made the cake, also posted an explanation on Facebook:

"The cake was made for Icing smiles ,for a really sick little girl. Yes I know the cake looks a HOT MESS ...... BUT here is the back story ...I had just lost my grandmother I had been with my Mom all day comforting her ,I came back to work on the cake I HAD 2 hours to get it done and delivered ,I was so upset I remember asking for prayer on Facebook to get it done. As I leave to deliver the cake it started raining cat's and dog's as I was taking the cake out of the truck the top of the box blows back and the cake get soaking wet . So the photo that was posted was after I had wiped her face with a paper towel . Yes I've seen all the really mean comments ,some even posted by some of my so-called cake friends that know it's my cake . At the end of the day ,I DIDN'T let that sick baby down l gave it all I had to give ,so make fun all me all you guy's want if that is what you need to do to feel good about yourself"

The "before" cake was created by Shawn McGreevy, who shared her support:

"I think someone had the guts to go for it... even when, I'm sure, they didn't know if they could pull it off. They took the chance anyway and put themselves out there. And maybe it didn't come out they way they were hoping, but it's their WORK."

Icing Smiles is a nonprofit organization located in Maryland that provides custom celebration cakes and other treats to families impacted by the critical illness of a child. If you would like to donate, visit icingsmiles.org.