WICHITA FALLS, Texas (KFDX/KJTL) — A Texas man with a history of assault and threat charges is in jail again after police said he threatened a man while pointing a flare gun at his face during a game of disc golf.

Marc Aaron Peters, 34, of Wichita Falls, is charged with aggravated assault. His bond has been set at $5,000.

The incident occurred on Sunday, Feb. 2 on the disc golf course of Lucy Park.

According to authorities, the victim called and said he and Peters were at the fourth hole of the course when Peters became upset and began yelling at him.

Police said the victim told them Peters pulled an orange flare gun with a black handle from his left pant leg and pointed it at him and said “I’m going to shoot your b**** a**.”

The victim said he ran and hid behind a tree while Peters was aiming the flare gun at his face. Peters then allegedly fled the scene in a gold Honda.

Officers said they later stopped a gold Honda on Fillmore Street. When officers patted Peters down, they discovered a holster on his left calf and an orange flare gun in his disc golf bag.

According to authorities, Peters told the officers that he got in an argument and warned the other player to leave him alone because he had a flare gun in his bag, but denied ever pulling the flare gun out.

However, officers did not believe Peters’ story, since the victim was able to describe the flare gun in detail to them. 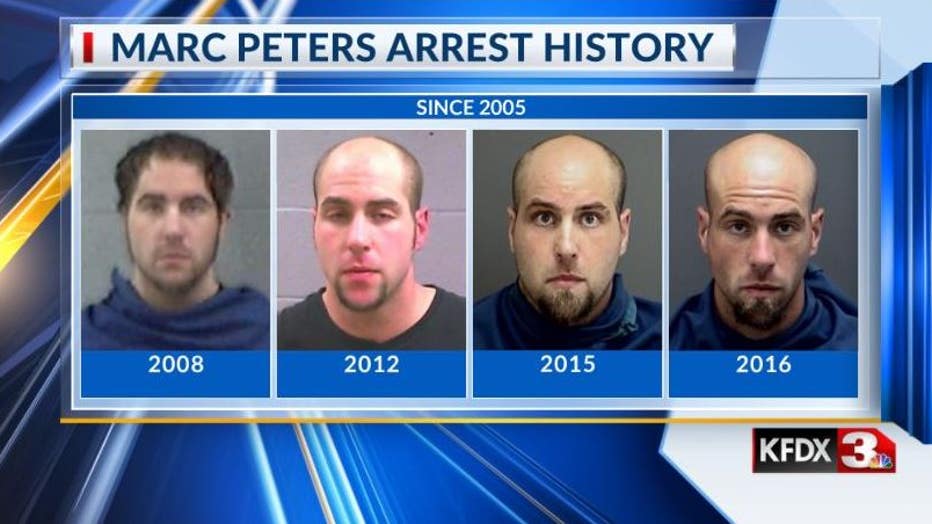 Peters has a lengthy criminal history, with 15 arrests since 2005 and charges including traffic violations, theft and burglary, drug possession, assault family violence and terroristic threats.

In April 2016, Peters was charged with one count of aggravated assault family violence, one count of evading arrest, and two counts of terroristic threat following incident in the 2000 block of Garfield Street.

When police arrived, they heard a woman inside screaming. When they kicked the front door in, Peters ran out of the backdoor.

The victim, Peters’ ex-girlfriend, said Peters blamed her for serving jail time in 2015 for allegedly attempting to kidnap her, and at one point, Peters picked up a hammer and said, “I’m going away for life this time.”

Two other girls at the scene said Peters also threatened to kill them, according to police.