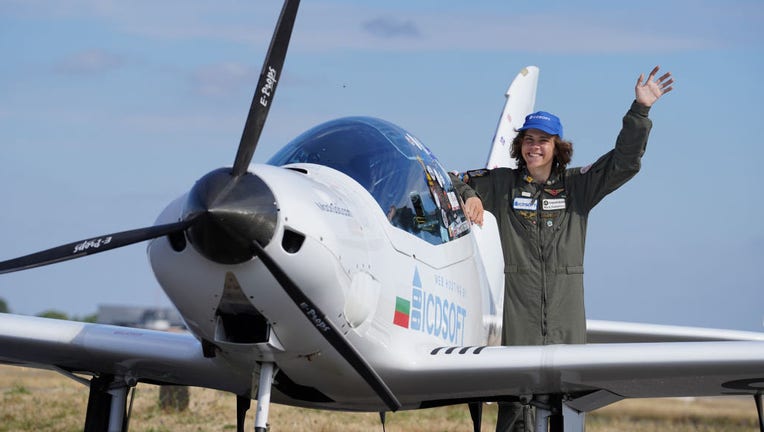 17-year-old pilot Mack Rutherford at Biggin Hill Airport, Westerham, Kent, as he continues in his bid to beat the Guinness World Record for the youngest person to fly around the world solo in a small plane. Picture date: Monday, August 22, 2022. (Pho

SOFIA, Bulgaria - A teenager from Belgium became the youngest person to fly around the world solo in a small aircraft after he landed on Wednesday in Bulgaria, where his global journey kicked off five months ago.

"Once you’re actually in the flight, you’re kind of in the zone. You’re busy doing things," Rutherford told FOX Television Stations last week from New York, where he made a pit stop. "Your entire focus is on that ... on the job at hand."

Teen pilot wants to fly solo around the world

Mack Rutherford talks with FOX Television Stations about his hope of becoming the youngest pilot to fly solo around the world.

Rutherford took the age record from Travis Ludlow of Britain, who was 18 when he made a solo flight around the world last year.

His older sister, Zara, became the youngest woman to fly solo around the world when she was 19 in January 2022. The teen said he was inspired by his older sister’s feat.

Rutherford said started his journey in Bulgaria on March 23. His travels took him through 52 countries that spanned five continents.

The flight took him through Africa and the Gulf region — where he faced periods of extreme heat — then on to India, China, South Korea, and Japan. From there, he headed to Alaska and down the U.S. West Coast to Mexico. The teen then headed north again along the U.S. East Coast to Canada, across the Atlantic via Iceland, to the U.K. and Belgium.

He then flew east across Europe and landed at an airport in the Bulgarian capital, Sofia, on Wednesday.

Mack Rutherford prepares to depart Iceland during his attempt to be the youngest pilot to fly solo around the world on Aug. 20, 2022, in Reykjavik, Iceland. (Photo by Micah Garen/Getty Images)

Rutherford said he’s always had an interest in flying, as both of his parents are pilots. He qualified for his pilot's license in 2020, which at the time, made him the youngest pilot in the world at the age of 15.

"When I got my license, I was 15 and you’re asked what to do with that license but I wasn’t sure what I wanted to do," Rutherford told FOX Television Stations.

But he kept flying, landing him at this world-record moment. The solo trip kicked off in Bulgaria because his sponsor, the web hosting company ICDSoft, is headquartered in Sofia and loaned him the plane.

Like his sister, Rutherford flew a Shark, one of the fastest ultralight aircraft in the world with a cruising speed reaching 300 kph (186 mph). Normally a two-seater, it was modified for his long journey by replacing the second seat with an extra tank.

The plane flew no higher than 5,000 feet, which Rutherford said is pretty low for a pilot.

"I see a lot of the world, and I think just constantly being able to see something makes it a lot easier to stay awake and keep my mind focused," the teen said.

He was the only person onboard, although the sponsored team in Belgium monitored his travels, and locals helped him out with accommodations in places where he landed. Fans could follow Rutherford’s route via his website. 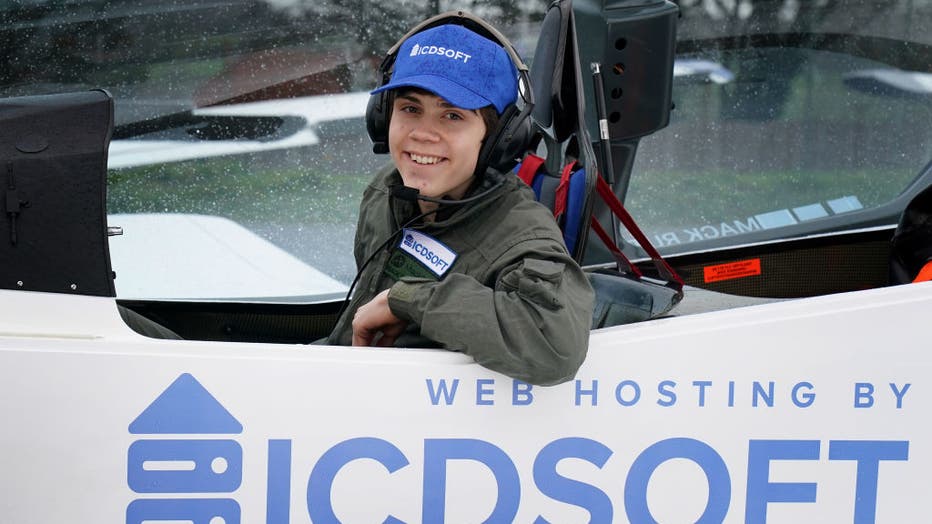 FILE - Mack Rutherford at the announcement of his bid to become the youngest male to fly solo round the world, at Biggin Hill Airfield, Westerham, Kent, on Feb. 15, 2022. (Photo by Gareth Fuller/PA Images via Getty Images)

Initially planned to take up to three months, the trip lasted longer due to several unexpected obstacles along the way, including monsoon rains, sandstorms, and extreme heat. Rutherford said his backup fuel tank wasn’t working while he was flying over Egypt, and he thought he may have to perform an emergency landing. He said it started working once he flew at a lower altitude and was able to finish that leg of the trip.

"That was definitely a very stressful moment ... when you don’t have enough fuel to reach your destination," Rutherford recalled.

But most of the delays were caused by waits to obtain permits and other documents required for further flights or having to alter the scheduled route if they were rejected.

On Wednesday, father Sam Rutherford said he was extremely happy and proud of his children’s achievements. He told reporters that such an event is especially encouraging for children to follow their dreams and for parents to support them in their endeavors. 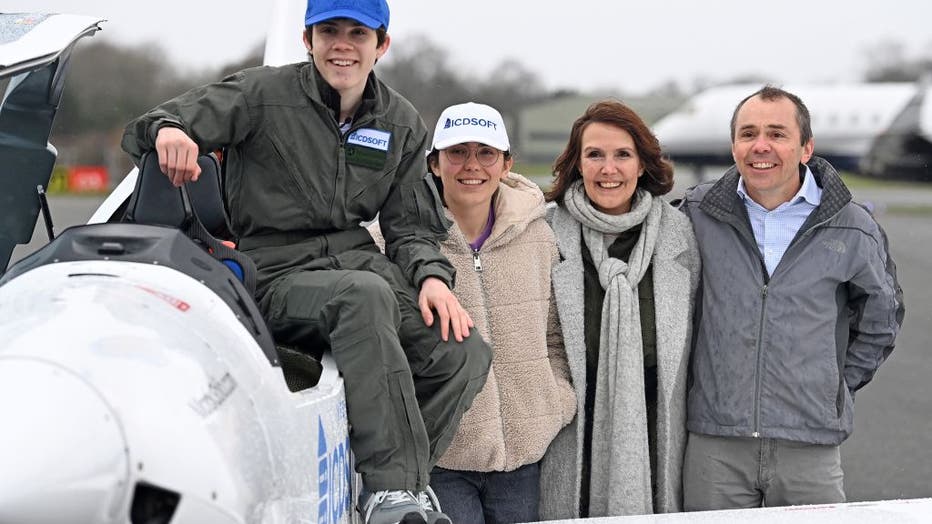 FILE - British-Belgian teenage pilot Mack Rutherford (L), his sister Zara Rutherford (2L), and his parents Beatrice de Smet (2R) and Sam Rutherford pose during a photocall to promote Mack's attempt to be the youngest male to make a round-the-world so

His sister, Zara Rutherford, said she kept in close touch with her younger brother during his journey.

"While he was flying, I constantly tried to keep in touch and help him. Our parents called him every day, and I joined in those conversations. I gave him advice on the route, on the flight, so that I could be useful to him," she said.

Lessons learned from around the world

In addition to learning about new cultures, Rutherford has picked up a few life lessons as well.

"Nothing goes as planned," he joked. "My original plan route was completely different to the plan ... to the route I’ve actually flown."

After landing in Bulgaria, Rutherford said he didn’t know what would top this experience, but he aimed to get back to academics.

"I definitely got to catch up with school after this," Rutherford said, noting how his future career plans are up in the air.

"I just know it will involve flying," the teen told FOX Television Stations.

Chris Williams and the Associated Press contributed to this story.