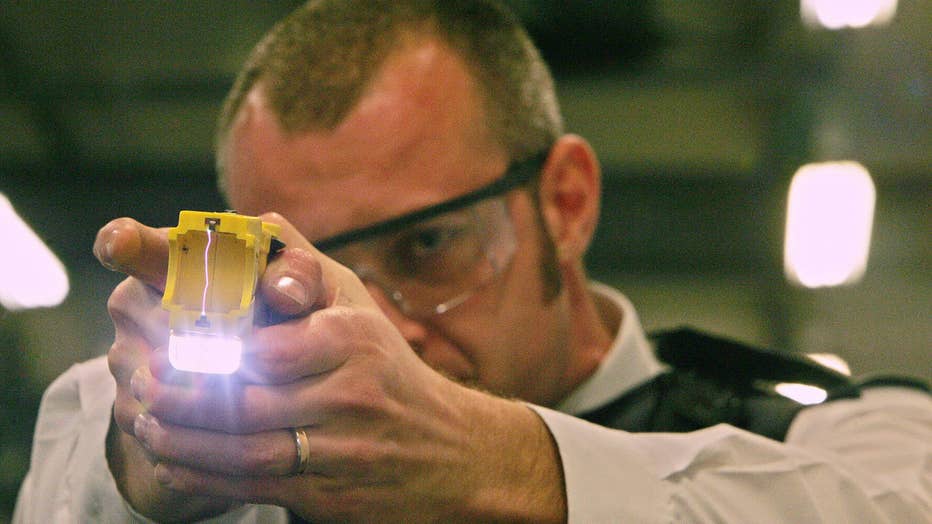 Taser International, the company whose electric shock devices have given it a bad rap, is rebranding. As part of the shift, the company announced Wednesday, it will be changing its name to Axon Enterprise and giving out free body cameras to police officers.

Axon body cameras, which the company has made for over a decade, will be distributed to every police officer in the country for a one-year trial run. As part of that trial, officers will get cloud storage for their footage and training on how to use the equipment. When the trial ends, a police department can return the cameras or opt to buy them.

Axon will still sell its “flagship” Taser product, it said Wednesday, but believes that its body cameras have the potential to transform policing, for both officers and the communities they work in.

“We believe these cameras are more than just tools to protect communities and the officers who serve them,” said Rick Smith, company CEO, in a statement. “They also hold the potential to change police work as we know it, by seamlessly collecting an impartial record and reducing the need for endless paperwork."

Video, whether shot by an observer on a cell phone or recorded by a police officer’s body camera, has played an important role not only in individual cases involving police violence, but also in the national conversation about police brutality and transparency. Body cameras have become popular with the public, too, on both sides of the aisle. An impressive 87 percent of Americans favor equipping law enforcement officers with them.

Axon has been selling body cameras since 2006 but its “flagship” Taser, used by almost 20,000 law enforcement agencies in 107 counties, has received far more attention.

As Smith told The Huffington Poston Wednesday, the Taser name “can be a little polarizing.” News organizations, principally The Intercept and The Washington Post, have investigated the dangers associated with the use of the 50,000 volt shock devices, some of them fatal. In 2015, Tasers were involved in the deaths of almost one person a week, The Washington Post reported. Cause and effect in many of those cases was not clear, the Post investigation notes, as some died from other injuries after being tased. The Los Angeles Times has described tasers as the “instruments of excessive force” for U.S. Border Patrol agents.

Despite this, Axon has maintained that its primary product is non-lethal, and that it’s actually saved tens of thousands of lives. Taser deaths are fairly rare, studies have shown, and considered generally safe. Excessive or improper use can heighten risk of injury, though.

Axon’s increased push to market its body cameras and evidence.com cloud storage platform — dubbed “Dropbox for cops” by Smith in 2014 — has been accused by some documentarians and journalists of “capitalizing on” the “movement for police accountability,” relying on its carefully crafted “corporate mythology” that it promotes safety despite its risks. In the weeks after Michael Brown was killed in Ferguson, Missouri in 2014, Taser’s stock price surged.

Turning every beat cop into a surveillance camera

Despite high support from the public for body cameras, not everyone — even police accountability advocates — have come to any consensus on their use, let alone on Taser’s free body cam program.

Among the concerns are that body cam programs promote mass, warrantless surveillance with zero oversight. As technology evolves, these worries drift from the realm of radical conspiracy theories to possible, probable problems. A report in March in The Intercept highlighted Taser’s recent acquisition of companies that run video analytics on footage collected, as well as the fact that Smith has pushed for real-time facial recognition software. Once baked into a body cam’s program, each police officer would essentially “turn every beat cop into a surveillance camera,” subjecting every passing person to a “perpetual line-up,” as one Georgetown study put it.

In communities of color and low-income communities, which already see higher instances of warrantless surveillance, the risks associated with such technology are critical. And though the president has promised to reinvigorate “law and order” and increase “national security,” more cynical Americans might already have had other reasons to be afraid before his swearing-in, and before Axon’s announcement about its free body camera program: major U.S. police departments have already purchased or are considering purchasing real-time facial recognition programs, affecting more than 117 million American adults.