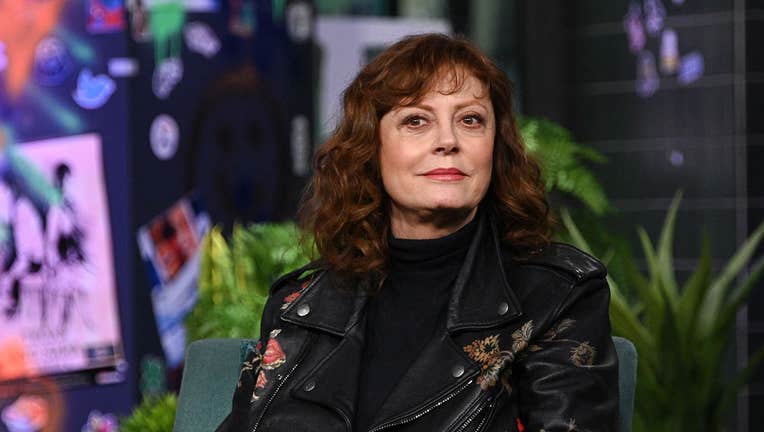 The original tweet showed a photo of police officers lining the New York City streets and read, "I’m gonna tell my kids this is what fascism looks like."

Sarandon's photo added the words, "So, if all these cops weren’t needed for CRIME that day, doesn’t that mean they aren’t needed ANY day?"

It is unclear if the photo was made by Sarandon or a re-shared post. A representative for the actress did not immediately respond to Fox News Digital's request for further comment.

Rivera and Wilbert Mora, 27, were shot on the evening of Jan. 21 while responding to a report of a domestic violence incident in Harlem involving a mother and her adult son, Lashawn McNeil.

Manhattan’s Fifth Avenue was a sea of blue on Thursday as the hearse carrying 22-year-old Rivera’s remains pulled up to uniformed officers saluting the fallen NYPD hero. The vehicle was escorted by police as it traveled to the historic St. Patrick's Cathedral from a funeral home in the Bronx’s Riverdale and passed traffic stopped in all directions along the way.

The "Thelma and Louise" actress received criticism in the replies to her tweet.

"Susan- I am so disappointed in you," one user responded. "Left wing is one thing but being inconsiderate of our finest is just wrong on so many levels. You owe the officer’s family along with the force an apology. Your comment is reprehensible."

"Extremely wrong of you to make these two honorable gentleman your personal pawns in your dumb little game," the user wrote.

"One woman lost her husband and the other lost her son," another user added. "They were protecting a mother from her abusive son when they were assassinated. These officers come from all over the country to pay respects and support the families. #ShameOnYou There, but for the grace of God."