MULTAN, Pakistan — A raging fire swept through a train in Pakistan's eastern Punjab Province on Thursday, killing 74 people, and survivors said afterward it took nearly 20 minutes for the train to stop amid contradictory reports about the condition of the train's brakes.

Three carriages were consumed by flames from a fire caused by a cooking gas stove and dozens of people jumped in panic from the speeding train.

Conductor Sadiue Ahmed Khan told The Associated Press the train's emergency braking system was in perfect working order and the train stopped within three minutes after the first signs of fire.

"This is the worst tragedy in my life as a driver," he said. 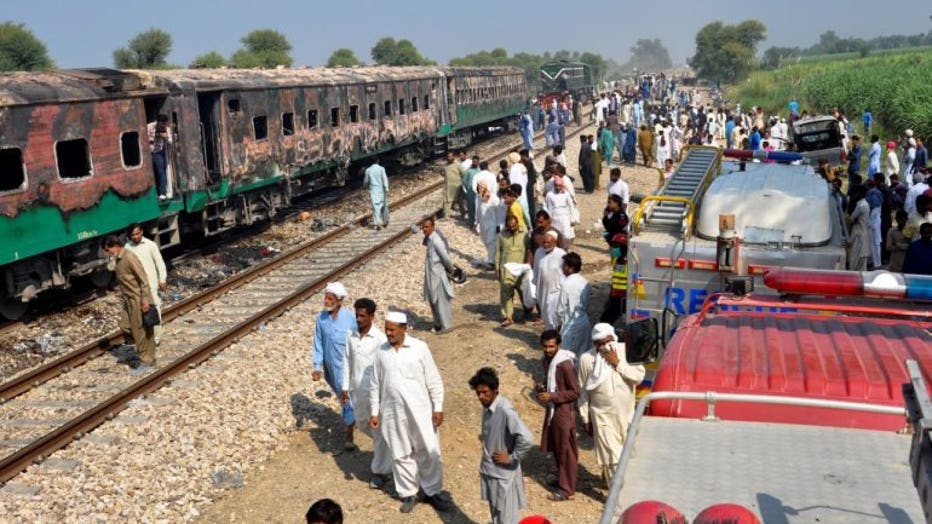 People gather beside the burnt-out train carriages after a passenger train caught on fire near Rahim Yar Khan in Punjab province on October 31, 2019. - At least 71 people were killed and dozens injured after cooking gas cylinders exploded on a train

Investigators said they will be looking at the train's braking system to determine its condition at the time of the fire. Survivors recounted pulling at emergency cords that weave through the train to notify the conductor, but they said the train continued to speed down the tracks.

Ghulam Abbas, a passenger who had gotten on the train in the town of Nawabshah in neighboring Sindh Province with his wife and two children, echoed other passengers who said it took nearly 20 minutes for the train to stop. He recounted watching panicked passengers jumping off the speeding locomotive.

"We learned afterward that most of them had died," he said.

Abbas' wife, Sulai Khan Bibi, said she was horrified about what would happen to their two small children. "We were so close to death, but Allah saved us," she said, clutching the children.

The train, which was traveling from the southern Arabian Sea port city of Karachi to Rawalpindi, just 10 kilometers (6 miles) from the federal capital, was carrying 857 passengers. Most of the dead were members of Tableeqi-e-Jamaat, an organization of Islamic missionaries. The fire was believed to have started in their compartment. 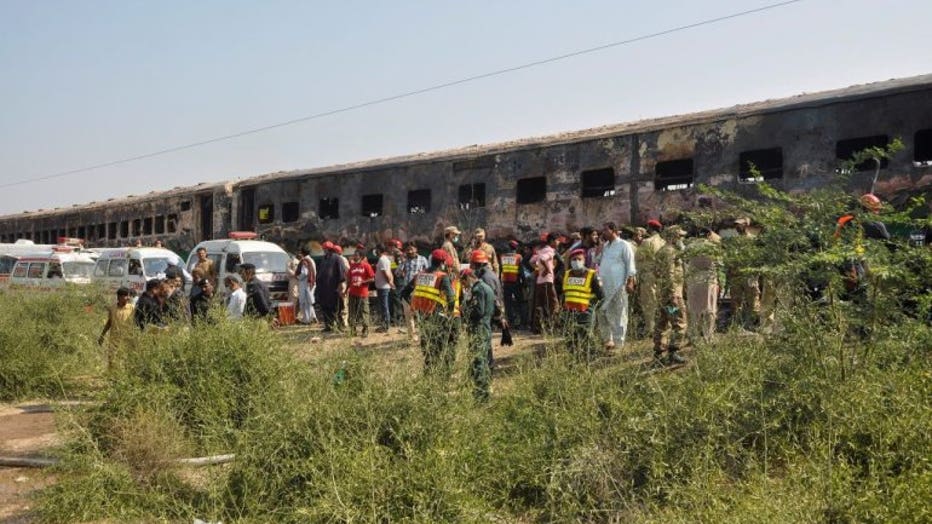 Rescue workers gather in front of the burnt-out train carriages after a passenger train caught on fire near Rahim Yar Khan in Punjab province on October 31, 2019. - At least 71 people were killed and dozens injured after cooking gas cylinders explode

Mufti Wahab, a district chief of the Tableeqi-e-Jamaat, said as many as 52 members of his organization were "martyred because of the fire."

The fire apparently started after one of several small stoves brought on to the train by the Tableeqi members exploded, setting other gas cylinders used to fuel the stoves on fire, said Deputy Railways Commissioner Jamil Ahmed.

Flames roared through the train engulfing three carriages as it approached the town of Liaquatpur in Punjab. Survivors recounted horrific scenes of fellow passengers screaming as they jumped through windows and off the train, flames billowing from the carriages.

"We could hear people crying and screaming for help," said Chaudhry Shujaat, who had boarded the train just a few hours earlier with his wife and two children. "I thought we would die. The next car was on fire. We felt so helpless."

Kaleem Ullah, an official with the district emergency services, said of the 43 people injured, 11 were still in critical condition. Several of them had jumped off the train — many to their deaths — after the fire broke out and before it eventually screeched to a halt, said Ahmed, the railways official.

In Pakistan, poor passengers often bring their own small gas stoves on the trains to cook their meals, despite rules to the contrary, according to Railways Minister Sheikh Rashid Ahmed. Safety regulations are often ignored in the overcrowded trains.

Railway official Shabir Ahmed said bodies of passengers were scattered over a 2 kilometer- (1 mile-) wide area around the site.

People from nearby villages rushed to the train, carrying buckets of water and shovels to help douse the flames. "But it was impossible," said Ahmed.

Through the morning hours, rescue workers and inspectors sifted through the charred wreckage, looking for survivors and aiding the injured. Local Pakistani TV footage from the scene showed a huge blaze raging as firefighters struggled to get it under control.

Officials said they were still trying to identify the victims and that the lists of fatalities and those injured were not ready yet. Another train was dispatched to bring the survivors to the city of Rawalpindi, they said.

Yasmin Rashid, a provincial minister in Punjab, told reporters that medical staff were providing the best possible treatment for the injured at a hospital in Liaquatpur. Those critically injured were taken by ambulance to the city of Multan, the largest city nearest to the site of the accident.

Khan took to Twitter to offer his condolences to the families of those killed and say he was praying for the speedy recovery of the injured. He also ordered an urgent investigation into the incident.

U.N. Secretary-General also extended "deep condolences" to the families of the victims as well as the people and government of Pakistan and wished "a swift and full recovery to those who were injured," U.N. spokesman Stephane Dujarric said.

Train accidents in Pakistan are often the result of poor railway infrastructure and official negligence. Media reports on Thursday suggest that railways officials did not notice when passengers boarded the train, carrying individual gas stoves.

In July, a passenger train rammed into a freight train at the Walhar Railway Station in the district of Rahim Yar Khan, killing at least 20 people and injuring 74.

A month earlier, a passenger train traveling to the eastern city of Lahore from the port city of Karachi collided with a freight train in the southern city of Hyderabad, killing three people.