KABUL, Afghanistan -- Explosions in Kabul on Saturday killed at least six people attending a funeral reportedly attended by government officials, including members of parliament, a day after hundreds of demonstrators turned out to demand more security in the capital.

The explosions came just three days after a powerful truck bomb attack in the city that killed 90 people and wounded more than 450. The attack raised fears about the government's ability to protect its citizens nearly 16 years into a war with insurgents. 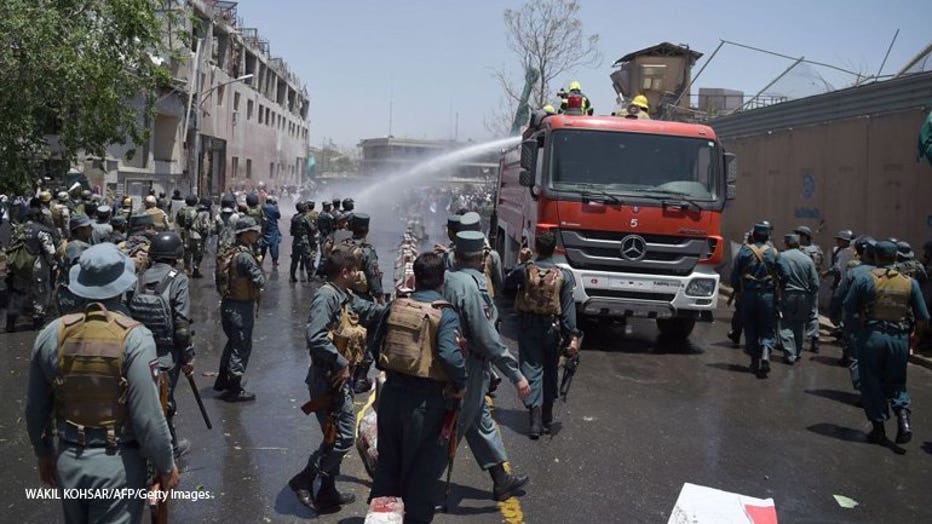 Afghan security forces use water canons to disperse protesters during clashes at a protest against the government following a catastrophic truck bomb attack near Zanbaq Square in Kabul on June 2, 2017. Afghan police June 2 fired live rounds to disper

Wahid Mujro, spokesman for the Public Health ministry, said three explosions rocked a cemetery where Afghan Sen. Alam Ezadyar's son was about to be buried. Salim Ezadyar was one of several people killed during the protest Friday attended by more than a thousand people in downtown Kabul.

Alam Ezadyar is deputy speaker for the upper house of the Afghanistan Parliament.

A couple hundred protesters passed the night under two big tents on a road near the presidential palace and the blast site and about 200 more joined them during the day. All roads toward the palace and nearby diplomatic areas were blocked Saturday by police and there was limited movement of vehicles and people.

The nature of Friday's demonstration shifted when protesters — many calling for the country's leadership to resign — attempted to move closer to the palace and some rushed police, who fired warning shots and used water cannons and eventually tear gas in attempt to disperse the crowd. The city's police chief said some demonstrators fired weapons in the direction of his men.

A member of Parliament said Friday that eight protesters had been shot dead, while a hospital official said four corpses were brought to his facility. Police said Friday two protesters were killed and 25 police injured but would not comment on the number of fatalities when asked to clarify the death toll Saturday.

Meanwhile on Saturday, Gen. Murad Ali Murad, deputy interior minister, urged demonstrators to disperse because of a high security threat level in the country. He also called on members of the public not to join the demonstration.

Ghani, meanwhile, met with senior security officials during an emergency security meeting. A statement from the president's office said the meeting determined that an investigation must find out what exactly happened that led to the violence and identify those who acted against the law.

Most of the casualties from the truck bombing were civilians, including women and children, officials have said. But the dead also included Afghan security guards at the facilities, including the U.S. Embassy, and 11 American contractors were wounded — none with life-threatening injuries, a U.S. State Department official said.

No one has claimed responsibility for the attack, which came in the first week of the Muslim holy month of Ramadan.