LOS ANGELES — Along busy highways, on the sides of buildings and inside a school basketball court, more than 50 colorful murals of Nipsey Hussle have popped up in Los Angeles since the beloved rapper and community activist was gunned down outside his clothing store.

Some show the rapper gazing into the sky or bowing his head. One has him standing with angel wings. Others include inspiring quotes. The street artists who created the work said they want his legacy to grow and his entrepreneurial spirit to live on.

"He wasn't the biggest star, but I knew his music. His passing led me to rediscover him under a completely new light," said Levi Ponce, who created an elaborate blue, black and white mural on 26-foot-building with Hussle's image in one day. A lyric from his song "Victory Lap" was written above his head. 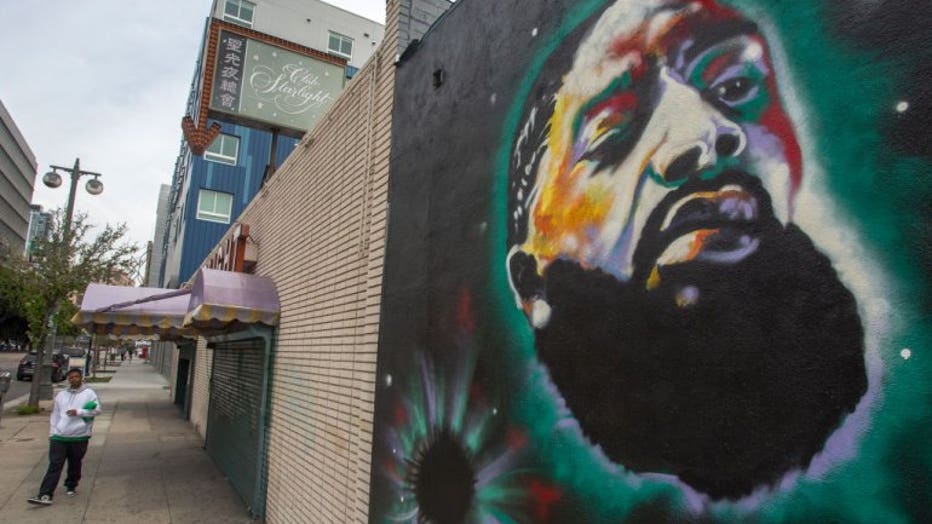 LOS ANGELES, CA - APRIL 11: A pedestrian walks past a recently painted mural for slain rapper Nipsey Hussle along a downtown street as a memorial celebration for him takes place on April 11, 2019 in Los Angeles, California. Nipsey Hussle was shot and

Hussle was fatally shot on March 31 while standing outside The Marathon, his South Los Angeles clothing store, not far from where he was raised.

"As a muralist, my philosophy is that we can do our part today with what we have now," Ponce said. "In my case, I'm a painter and paint in the streets. Nipsey was able to give it on a greater scale. He went out of his way to help the community. For me, that's motivation and inspiration. So I had to get my paint on the walls right away after hearing the sad news." 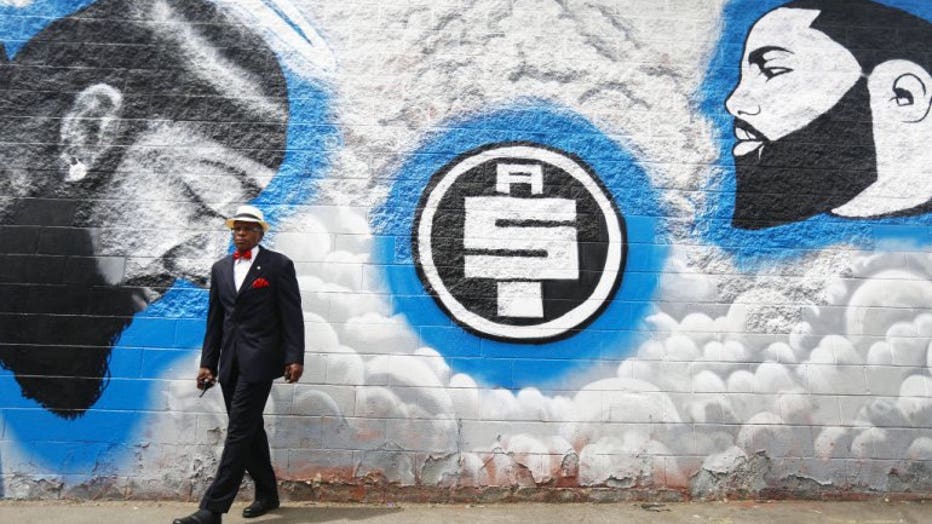 LOS ANGELES, CALIFORNIA - APRIL 11: A man walks after posing in front of a mural to slain rapper Nipsey Hussle as people await outside The Marathon Clothing store for the funeral procession for Hussle on April 11, 2019 in Los Angeles, California. Nip

Eric R. Holder Jr., who has been charged with killing Hussle, has pleaded not guilty. Police have said Holder and Hussle had several interactions the day of the shooting and have described it as being the result of a personal dispute.

The death of the 33-year-old Hussle sent a shock wave through the hip-hop community and beyond. Fans poured out adoration for a man whose career hit new heights with "Victory Lap," his first studio album that earned a Grammy nomination after he released much sought-after mixtapes for a decade. He was an up-and-coming rapper and beloved figure for his philanthropic work that went well beyond the usual celebrity "giving back" ethos. 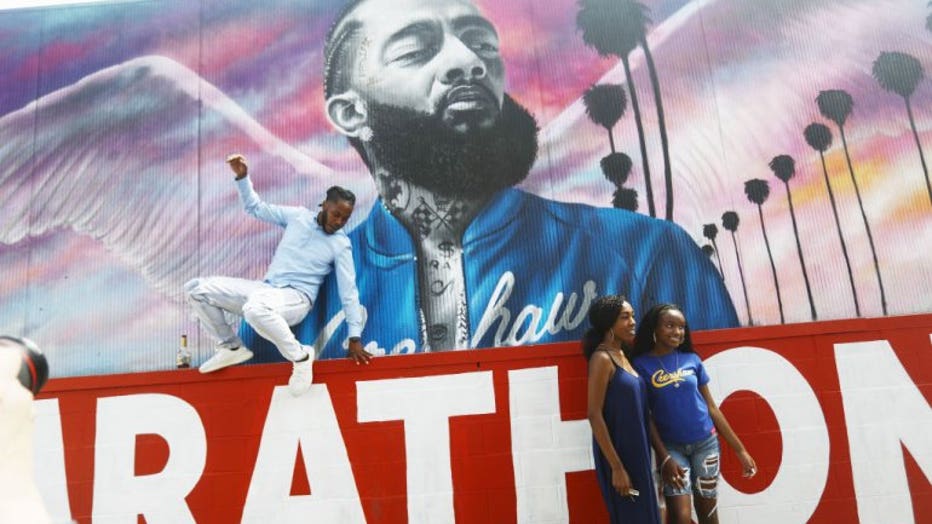 LOS ANGELES, CALIFORNIA - APRIL 11: Fans gather and pose in front of a mural to slain rapper Nipsey Hussle as they await outside The Marathon Clothing store for the funeral procession for Hussle on April 11, 2019 in Los Angeles, California. Nipsey Hu

After he passed away, Hussle's peers, from Jay-Z to Snoop Dogg, along with political and community leaders, were quick and effusive in their praise using words. For Ponce and others, paint was how they paid homage.

"The world is uniting because of him. You can see the revival of all the murals going up," said Nick Ansom, CEO of the Venice Basketball League. He spearheaded a project to create the Nipsey Hussle Memorial Basketball Court at the nonprofit charter school Crete Academy, a few blocks from Hussle's clothing store.

The basketball court is painted blue with a checkerboard border and a side view of Hussle at midcourt.

Ansom said he felt the urge to push forward the initiative to create a basketball court mural in honor of Hussle as a "thank you" to the rapper who he says was "starting to reach his peak." He and his partner, Michael McLeod, drove around South Los Angeles looking for possible schools before Crete Academy founder-principal Hattie Mitchell agreed to embrace the idea.

Afterward, Ansom drew his vision for the mural on paper and called artist Gustavo Zermeno Jr. to design it. He said about 40 people gathered to paint and touch up the mural in a week's time frame. Hussle's father and sister attended the ribbon-cutting ceremony to unveil it just days after the rapper's public memorial service, which drew more than 20,000 people to Staples Center.

"Nipsey was an advocate and passionate (about) the game (of basketball)," said Ansom, who started his basketball league in 2006 after he moved to Los Angeles from France. He called himself a big fan of Hussle's music and visited his clothing store to purchase apparel.

"He used to host charity games at Crenshaw High School," he said. "He was always around the game. (This mural) is hip-hop, basketball and art all in one."

Before Zermeno helped create Hussle's basketball court mural, he had already done some street art of the rapper elsewhere in town. He painted a mural of Hussle in between other popular Los Angeles figures including Lakers player LeBron James and Snoop Dogg on the side of a clothing store.

When Ansom asked for his help, Zermeno said it was a "no brainer." The muralist feels he's just doing his part to celebrate Hussle by doing both for free.

"It's bigger than just painting a mural," said Zermeno, who has also created murals of the late Mac Miller and Selena. "A lot of the murals are solidifying Nipsey's legacy."

Mitchell shed tears while talking about Hussle's positive influence over her students at Crete Academy and the community. She was not only taken aback by the mural at her school, but also by the many others around town.

"These murals are popping up every day," she said. "There are photos that are truly memorializing this man. Most people are coming here to take photos with their family and etc. But I saw an individual who didn't have his phone out. He had his shoulders up, his head down. At that moment, I truly realized that our memorial in our court is somewhat of a gravesite. ... It's a place where you can remember someone, feel their spirit and grieve."