In the wake of the Atlanta-area spa shootings and an increase in anti-Asian hate amid the coronavirus pandemic, governors and former top officials across six presidential administrations issued a pair of statements Friday condemning the violence and harassment against Asian Americans and Pacific Islanders (AAPI).

A total of 26 governors signed a joint statement in a show of solidarity, which included Democratic governors as well as two Republican governors — Govs. Charlie Baker of Massachusetts and Larry Hogan of Maryland.

The signed letter was shared on the same day as Stop AAPI Hate’s virtual day of action, called #StopAsianHate. Stop AAPI Hate is a nonprofit that works to end hate against Asian Americans and Pacific Islanders and tracks incidents of discrimination, hate and xenophobia.

"Today, and every day, we stand in solidarity, in support, and in shared resolve with the Asian American community. Hate will not divide our states, territories, and communities. We condemn all expressions of racism, xenophobia, scapegoating, and anti-Asian sentiment," the governors said in the joint statement. 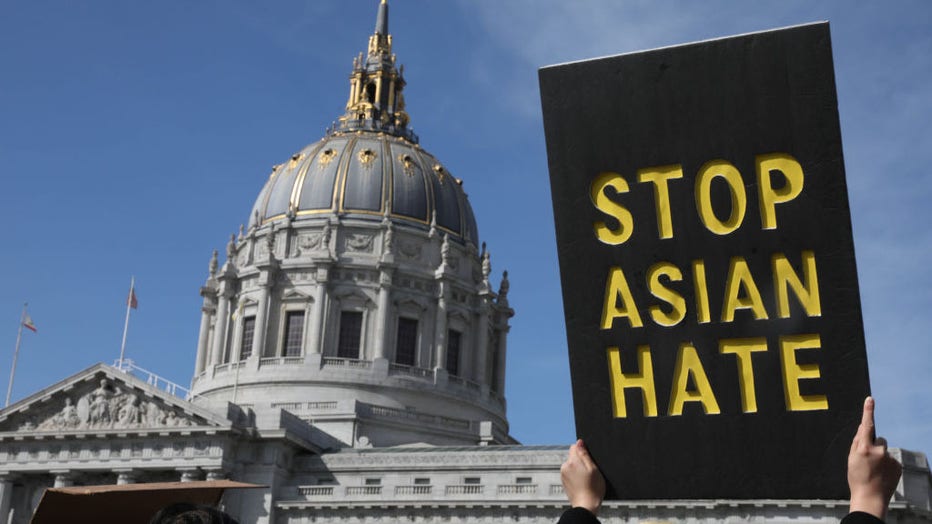 FILE - A demonstrator holds a sign saying “Stop Asian Hate” as they march toward City Hall after rallying in front of the Hall of Justice on March 22, 2021 in San Francisco, Calif. (Lea Suzuki/The San Francisco Chronicle via Getty Images)

The governors said more must be done to "protect, uplift and support the Asian American community."

"What is happening to Asian Americans is simply un-American," they added.

A separate joint statement from more than 60 Asian American and Pacific Islanders (AAPI) who served as senior government officials under both Republican and Democratic administrations also denounced "the alarming increase in violence, rhetoric, and bigotry against the AAPI community."

The joint statement calls on political leaders to "denounce violence and hateful rhetoric against AAPIs; to work with local, state, and national leaders and law enforcement agencies to better protect AAPIs; and to pass and fund legislation that will better support the needs of the AAPI community. #StopAsianHate"

On March 16, a gunman entered three Atlanta-area spas and opened fire, killing eight people. Six of the victims were women of Asian descent. Another person was shot but survived.

Police have charged Robert Aaron Long, a 21-year-old White man, in the shooting spree. Investigators said Long confessed to the slayings but claimed they weren't racially motivated. He claimed to have a sex addiction, which caused him to lash out at what he saw as sources of temptation, according to authorities. Police have said they're still working to establish a motive, including looking into whether the attacks can be classified as hate crimes.

In the wake of the shootings, hundreds of Asian Americans and Pacific Islanders already worn down by a year of pandemic-fueled racist attacks turned to social media to air their anger, sadness, fear and hopelessness. Hundreds of people of all ages and varied racial and ethnic backgrounds have gathered for rallies in cities across the U.S. to demand justice for the victims and to denounce racism, xenophobia and misogyny.

A study released in October by the Stop AAPI Hate Youth Campaign found that 1 in 4 young Asian Americans had personally experienced anti-Asian hate throughout the COVID-19 pandemic.

Asian Americans have also experienced the largest single rise in severe online hate and harassment year-over-year compared to other groups, according to a survey released this week by the Anti-Defamation League.

In a separate study published this month in the American Journal of Public Health, researchers found that social media posts using hashtags such as #Chinesevirus or #Chinaflu corresponded to greater anti-Asian sentiment than posts with hashtags using the official scientific names for the pandemic virus and disease — #coronavirus or #COVID19.