MOSCOW  -- The St. Petersburg metro attack was carried out by a suicide bomber originally from the central Asian Republic of Kyrgyzstan, authorities said.

The Russian Investigative Committee said the attack was carried out by Akbarjon Djalilov, 22, identified earlier by Kyrgyz authorities as a Russian national born in Kyrgyzstan.

Investigators matched Djalilov's DNA to a bomb left at a second metro station that was defused by authorities, the committee said. 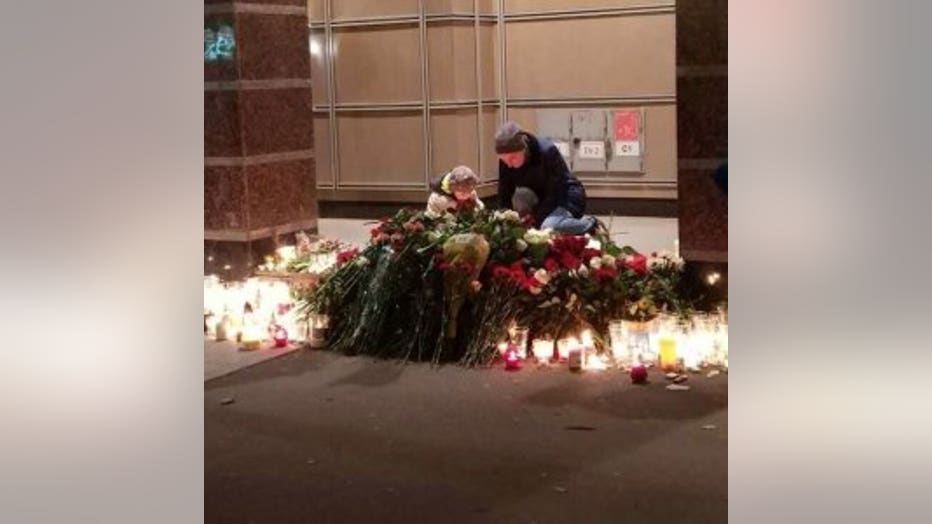 People have left flowers and candles to honor those affected by the attack at the St Petersberg metro. An explosion tore through a train as it was traveling between two stations in Russia's second-biggest city, injuring dozens more.

The Russian health ministry on Tuesday raised the number of dead from 11 to 14, although it was unclear whether that included the attacker. Four of the dozens of people injured are in critical condition, Health Minister Veronika Skvortsova said, according to state-run TASS.

Russian Prime Minister Dmitry Medvedev described the blast as a "terrorist act." Train driver praised for actions that likely saved lives. President Vladimir Putin was in St. Petersburg earlier on the day of the attack. Flowers and tributes laid at memorials as three-day period of mourning began. Some metro stations are reopening after a complete network shutdown.

The explosion took place between the Sennaya Ploshchad and Tekhnologichesky Institut stations at about 2.40 p.m. on Monday. Photographs from the scene showed bandaged and bloodied bodies being carried from the station where the train came to a stop.

Others showed bodies lying by the train at Tekhnologichesky Institut as the station filled with smoke.

The second, larger device was found and defused at another station, Ploshchad Vosstaniya, and is believed to have been planted by Djalilov, Russian investigators said.

"Criminalists found his DNA on a bag with a bomb left at the Ploshchad Vosstaniya metro station," the Russian Investigative Committee said in a statement, adding that CCTV footage was also used to come to their conclusions.

Earlier state media reports quoted law enforcement sources saying the device had been hidden in a fire extinguisher and was larger than the one that exploded. It carried about a kilogram of TNT, the reports said.

The driver of the train, Alexander Kaverin, has been praised in Russia for continuing to the next station after the blast, ensurin a quick evacuation of passengers.

"At that moment there was no question of fear. It was just a question of working, rolling up your sleeves," he said.

"I just acted according to instructions, because we have instructions worked out especially for such cases. We have had explosions before and I think these instructions are very clever, very correct."

No group has claimed responsibility for the attack, which led to the shutdown of the city's metro system. Russian Prime Minister Dmitry Medvedev described it as a "terrorist act."

Erlan Abyldaev, the Kyrgyz Foreign Minister, confirmed the bombing was a suicide attack but said the perpetrator''s motives were unclear.

"Regarding the link with Islamic radicalism, we have to wait to know more until the investigation yields its full results," Abyldaev said at a press conference with Russian Foreign Minister Sergey Lavrov.

Kyrgyzstan is a Muslim-majority nation in Central Asia of around six million people. It is formerly part of the Soviet Union and remains a close ally of Russia.

Kyrgyzstan has a large population of Chechens. They were initially displaced from Chechnya -- a Russian province -- during World War II.

Moscow still battles an insurgency in Chechnya and has fought wars over the territory. It is not clear whether the metro bombing suspect has Chechen origins.

"Of course the fact that the terror attack happened when the head of the state was in town is a food for thought and is subject to analysis by the special services. Any terror attack that happens in the country is an attack on every single Russian citizen. Including the head of state," he said.

Analysts have speculated that the bomber could be affiliated with either a Chechen separatist group or ISIS. The bombing of a Russian MetroJet flight over the Sinai desert in Egypt, which killed all 224 people aboard, was claimed by ISIS

Many Chechen fighters have gone to fight in Syria, she said, and it has long been feared that they could bring their battlefield expertise back home to carry out attacks.

This would fit in with Putin's theory of ISIS as an international terror network.

"It makes it easier for him to make that proposal... to President Trump and the West -- 'let's get on board, let's fight terrorism together.'"

However, former FBI special agent Bobby Chacon says that to stay silent after an attack goes against the ISIS modus operandi.

"The first thing that's missing from an investigator's perspective is the claim of responsibility," he told CNN.

"Last year when two ISIS operatives attacked police officers on the outskirts of Moscow... one of the first things that was released was the video where they claimed allegiance to al-Baghdadi, the ISIS leader and ISIS itself and that's a hallmark, as we've seen in San Bernardino, of an ISIS attack."

Russia was once a hotspot for terror attacks, but the country has experienced relatively few in recent years.

Many previous attacks were aimed at progressing separatist causes in Russia's North Caucasus, including movements in Chechnya and Dagestan.

In December 2013, a suicide bombing at a train station in Volgograd killed at least 16 people, in an attack linked to a network in Dagestan. The following day, in the same city, a suicide bombing on a trolley bus killed 14 people.

In 2010, two female suicide bombers linked to the Chechen insurgency blew themselves up at two Moscow metro stations, killing 40. In 2002, Chechen rebels killed 170 hostages in a theater in the capital, Moscow.