COLOMBO, Sri Lanka — Catholic churches in Sri Lanka canceled all Sunday Masses until further notice over fears of more attacks from Islamic State-linked extremists, and the military said its soldiers in the eastern part of the country exchanged gunfire Friday night with suspects believed linked to the Easter bombings.

Cardinal Malcolm Ranjith told journalists that church officials had seen a leaked security document describing Catholic churches and other denominations as major targets for attackers. Ranjith, who is archbishop of Colombo, also asked the faithful to stay home for their own safety.

"We don't want repetitions," Ranjith said in canceling the services.

The cardinal's comments come after the U.S. Embassy in Sri Lanka warned the public to stay away from places of worship over the weekend, a stark alert underlining that authorities believe that members of the group remain at large.

The group's leader, Mohamed Zahran, killed himself in a suicide bombing at the Shangri-La hotel, one of six hotels and churches targeted in the attacks that killed at least 250 people on Sunday, police said.

Police also said they had arrested the second in command of the group, known as National Towheed Jamaat.

In Sri Lanka's Eastern Province, soldiers raiding a building found themselves in a gunbattle with suspected militants linked to the bombings, said Brig. Sumith Atapattu.

Increased security was visible across Colombo as authorities warned of possible new attacks and pursued suspects who could have access to explosives. Authorities told Muslims to pray at home rather than attend communal Friday prayers that are the most important religious service of the week. Several mosques held services despite the warning. At one mosque in Colombo, police armed with Kalashnikov assault rifles stood guard outside. 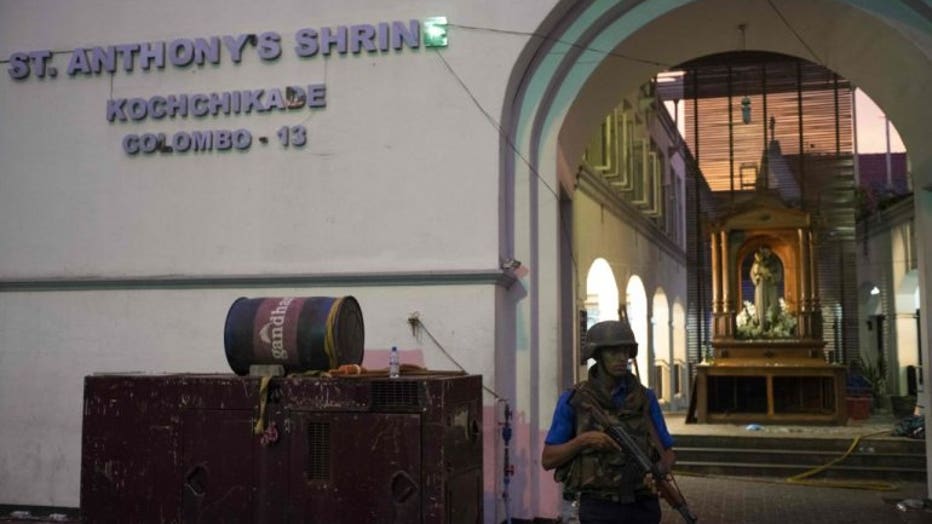 A soldier stands guard outside St. Anthony's Shrine in Colombo on April 26, 2019, following a series of bomb blasts targeting churches and luxury hotels on Easter Sunday in Sri Lanka. - Authorities in Sri Lanka on April 25 lowered the death toll in a

Also on Friday, officials allowed journalists inside one of the bombed churches, St. Anthony's Shrine in Colombo.

Broken glass littered the darkened sanctuary's broken pews and blood stained the floor. Shoes were left behind by panicked worshippers. Broken bottles of holy water lay on the floor, where flowers were strewn. Armed soldiers stood guard outside.

Gration Fernando crossed himself when he looked at the church after walking out of his shop nearby. Fernando said he, like other Sri Lankans, is worried about further attacks. 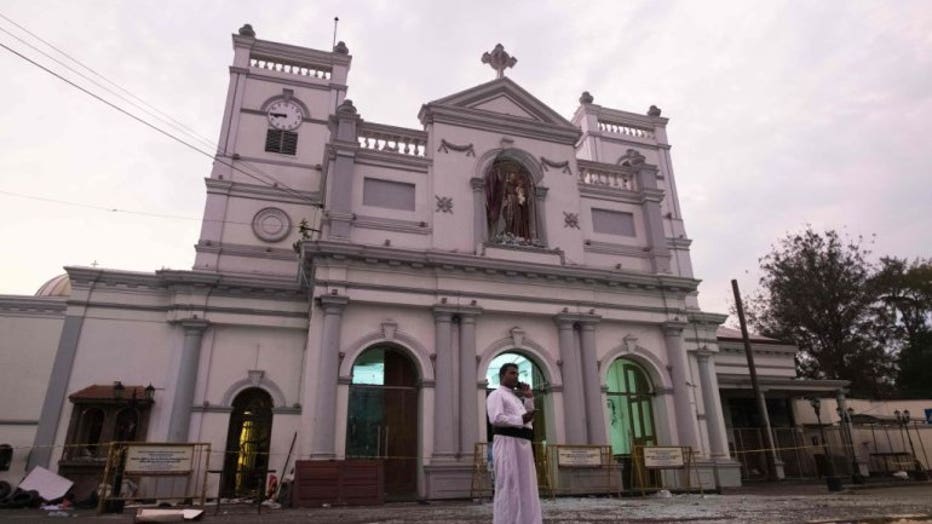 A priest speaks on his mobile phone outside St. Anthony's Shrine in Colombo on April 26, 2019, following a series of bomb blasts targeting churches and luxury hotels on Easter Sunday in Sri Lanka. - Authorities in Sri Lanka on April 25 lowered the de

Australia's prime minister said it had been confirmed that the Sri Lanka attackers were supported by the Islamic State group, which has claimed responsibility for the massacre. The group has distributed a video of Zahran and others pledging allegiance to the withered caliphate.

Sri Lankan President Maithripala Sirisena told reporters that about 140 people had been identified as having links to the Islamic State group, and that the government has the capability "to completely control" IS activities in the country.

"We will completely control this and create a free and peaceful environment for people to live," he said.

Police said investigators had determined that the attackers' military training was provided by someone they called "Army Mohideen," and that weapons training had taken place overseas and at some locations in Sri Lanka's Eastern Province.

Police also said they arrested the operator of a copper factory who had helped Mohideen make improvised explosive devices and purchase empty cartridges sold by the Sri Lankan military as scrap copper.

Sirisena blamed Sri Lanka's defense secretary, who resigned Thursday, and police chief, who he said would soon step down, for failing to share information from international intelligence agencies about the plot.

The discrepancy was not immediately explained, but it fit a pattern of conflicting information by Sri Lankan officials that have muddled the investigation.

In a predominantly Muslim area of Colombo's Maligawatta neighborhood, vegetable sellers set out their produce on sidewalks near the mosques as women in long black chadors shopped.

Imtiyas Ahamed, a leader at a mosque, said extremists like those from the Islamic State group were not faithful Muslims.

"In Islam, it is not said to kill yourself and kill others," Ahamed said.

As he spoke, men came into the mosque to pray on a purple-and-gray carpet.

Ahamed also urged people not to think that all of Sri Lanka's Muslims were like the people who carried out Sunday's attacks.

"After the New Zealand (mosque) attack, we don't think every white Australian is an extremist," he said.