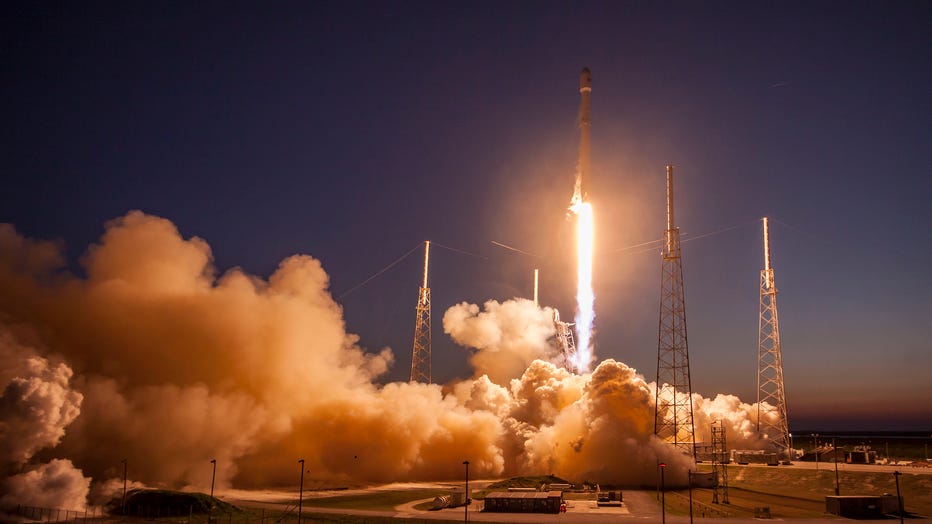 A SpaceX rocket makes a successful launch on March 4, 2016 in Cape Canaveral, Fla. (Photo by NASA via Getty Images)

Elon Musk’s aerospace manufacturer and space travel company SpaceX plans to send two tourists around the moon by the end of 2018 — marking the first time that humans have traveled that deep into space in more than 45 years.

The unnamed private citizens have already paid a “significant deposit” for the weeklong cruise around the moon, SpaceX said in a Monday statement.

Musk — who is perhaps also well known as the co-founder and CEO of electric car company Tesla, and for his new gig on President Trump’s advisory council  — refused to say how exactly much the would-be space tourists have paid or name them, although he admitted that they’re not celebrities.

‘‘It’s nobody from Hollywood,’’ he said.

If the private mission takes off as-planned near the end of 2018, it will come 46 years after NASA’s most recent moon landing, in December 1972.

The paying passengers will not step foot on the moon. Instead, they’ll loop around it before sailing back to Earth. In the nearly two years before they take off, the pair will receive extensive training for emergencies, Musk said.

The mission announcement comes about six months after one of SpaceX’s rockets exploded on a Florida launch pad, destroying a commercial satellite that was meant to help bring internet access to Africa. Musk insists that the 2018 trip will be safe, albeit not entirely risk-free.

"They're certainly not naive, and we'll do everything we can to minimize that risk, but it's not zero. But they're coming into this with their eyes open," Musk said.

A history of firsts

Musk founded the company in 2002 with the ultimate goal of sending humans to live on Mars. In 2010, it became the first private company to send an unmanned capsule into orbit. Two years later, SpaceX sent one of its spacecraft to the International Space Station (ISS), marking the first time a private craft docked at the governments-run facility.

SpaceX has worked heavily with NASA since its inception — in 2014, the U.S.’s federal space agency selected it as one of two private entities to transport NASA astronauts to and from the ISS (Boeing was the other company selected). Those flights likely won’t take off until 2019.

In the meantime, NASA has used SpaceX rockets to ferry research equipment into space.

“NASA commends its industry partners for reaching higher,” the agency said in a statement.

While the flight around the moon will be a major accomplishment for SpaceX, the billionaire still has his eyes set on Mars. The company’s settlement program, Mars One, aims to establish a permanent human colony on the distant planet.

But the journey to the Red Planet isn’t running on time. SpaceX originally planned to send a robotic probe to Mars in 2018, but that mission was rescheduled for 2020. SpaceX execs said that they were forced to push back the date to focus on trips to the ISS, and to work with NASA.

At first, SpaceX vowed to send its first crewed flights to Mars in 2024. But in 2016, Mars One unveiled an updated timeline, and now the first crews to land on the Red Planet are expected in 2032, following a seven-month-long, one-way spacecraft ride.

The company has been recruiting its frontline of astronaut-pioneers for the program since 2013, when 202,586 people applied to be in the first wave of Mars settlers. That pool that has been whittled down to 100. After more cuts this year, 12 to 24 wannabe astronauts will start training, SpaceX said.

Musk’s Mars mission may be humankind’s most tangible hope to get people on the red planet. While NASA has sent rovers and probes there, it has never attempted to send a human. The government agency has long promised to send astronauts to Mars, although it has never detailed a timeline or plan to do so.

"We think we're on the right trajectory to get humans to Mars in the 2030's," NASA Administrator Charles Bolden said in April, without providing specifics.

In his inaugural address on Jan. 20, President Donald Trump said the U.S. is “ready to unlock the mysteries of space,” and has since urged NASA to fly back to the moon. However, he’s made no mention of Mars.