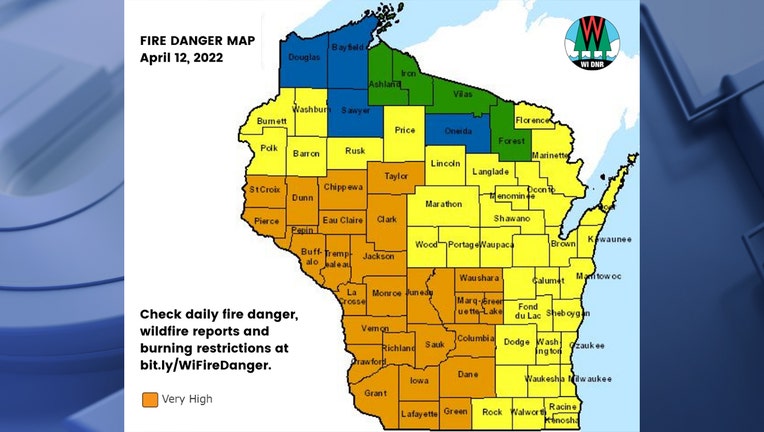 MILWAUKEE - The Wisconsin Department of Natural Resources is asking the public to stay vigilant and avoid burning because of potential fire danger across the state Tuesday, April 12.

The increased fire danger is due to a high pressure weather system, lack of significant rain and dry vegetation, primarily in the southern two-thirds of Wisconsin. The western half of the state is particularly at risk – considered "very high," designated on the map with orange.

The DNR said it has responded to 107 wildfires burning more than 276 acres so far this year. Nineteen of those were reported Monday, burning 120 acres. Most of these were related to debris burning.

Small fires for warming or cooking are allowed but highly discouraged, especially during the daytime, as any spark can cause a wildfire under these conditions. Be extra careful with any outdoor flames, campfires, ash disposal or equipment use. Check any recent debris burns for smoldering embers, as breezy conditions can cause fires to rekindle.

A few showers later tonight then periods of rain and thunder on Wednesday. It'll be warm and windy. If we see severe weather, it'll be from mid to late afternoon through early evening as a cold front passes. Dry but windy and colder the rest of the week.

Tickets are now on sale for the second annual Kwik Trip Holiday Face-Off, which will take place December 28-29 at Fiserv Forum.