MILWAUKEE -- Some businesses in Milwaukee's Harambee neighborhood were hit hard by looting and vandalism over the weekend. Several of them are getting ready to reopen to customers -- while showing solidarity with the protests taking place. 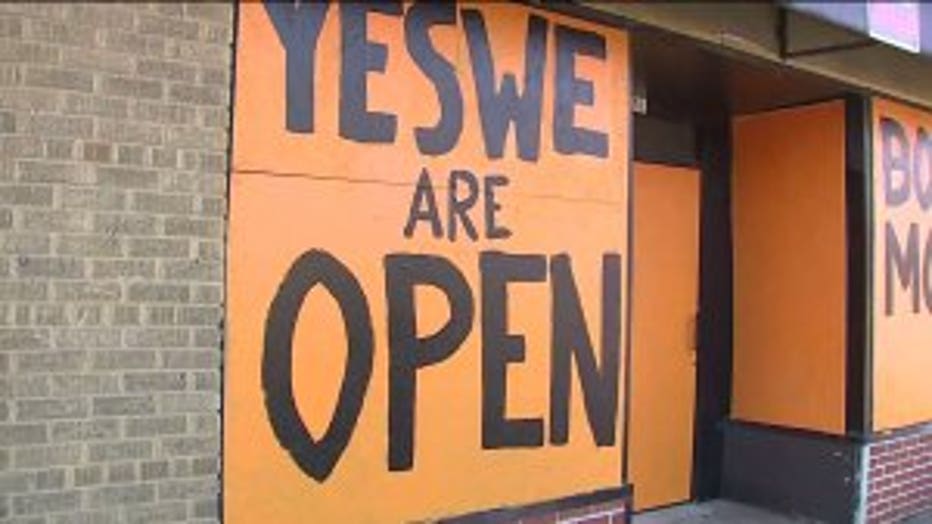 The Boost Mobile is open for business. They say their windows will be boarded up for several weeks while they work on repairs. They are reopening while making sure their community sees they stand in solidarity with the recent protests in their neighborhood.

Employees of the Boost Mobile on MLK Drive and Locust found their operations shattered Saturday morning, May 30.

"We had customers coming to try and pay their bills and they were upset," said Ray Hamdan, Boot Mobile manager.

Overnight looting cleaned them out. They were not alone. Several businesses in the Harambee neighborhood are working to recover.

"We just want the community to know we are back and we are open, here to serve," said Hamdan.

While showing solidarity for the community they serve.

"A lot of the neighborhood people are supporting us and they are upset about what happened to their store," said Hamdan.

Several businesses along the Harambee neighborhood are putting up new signs outside their operation.

"Businesses did that, they wanted people to know these are businesses that stand with them. One of the things that was apparent from the vandalism occurring was it was impacting businesses owned by people of color. It's a neighborhood that's been distressed, that's been fighting back the same thing we saw in Sherman Park," said Reggie Moore, Office of Violence Prevention.

Reggie Moore with the Office of Violence Prevention says organizers of Monday's protest worked with a collective of people in the community to keep all protests in the Harambee neighborhood peaceful.

"In the Harambee neighborhood, there were no clashes with police or tear gas, as we seen in previous night's, last night was different than previous nights and that really took a collective effort and a collective call from both the organizers of the protest, the protesters themselves, as well as the residents. Again, we all stand for justice," said Moore.

Milwaukee Mayor Tom Barrett announced Tuesday, June 2 for the first time in three days he would not be issuing a curfew. This, after Monday's demonstrations remained peaceful and there was a notable decrease in illegal activity.