Through an open records request, FOX6 Investigators obtained data on police response times and staffing levels dating back to 2019, the last full year before the COVID-19 pandemic.

They show response times are up at every priority level in every police district, and some city residents are starting to speak up.

"It sounded like a train. Bam!" recalled Kimberlynn Dunn about the March afternoon when a reckless driver blew through a neighborhood stop sign, caught air on a bump and barreled into her SUV, parked in front of her house near 1st and Chambers.

The noise roused neighbors, many of whom called 911 at the same time.

"This guy, he was driving like a total psychopath," Amber Jeanpierre told a 911 operator.

"Totaled my f***ing truck!" exclaimed Dunn, who had just witnessed the destruction of her family's only form of private transportation. 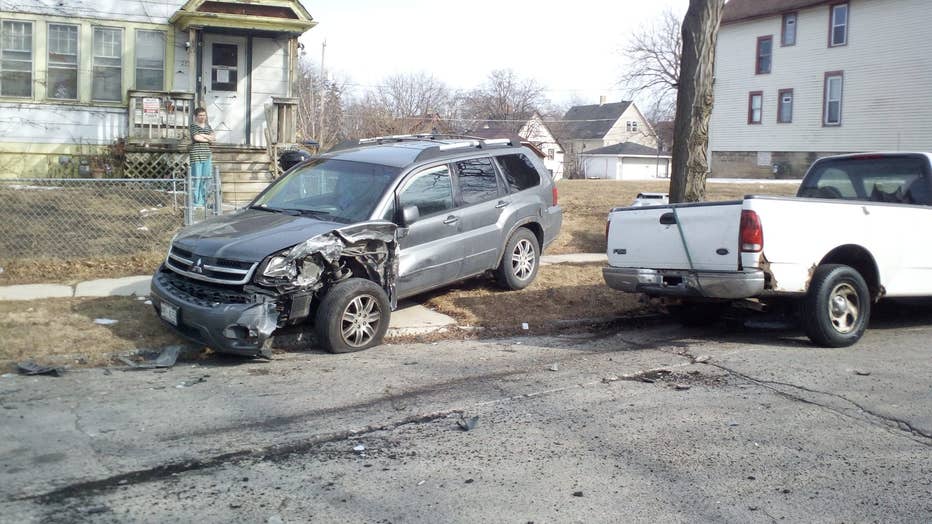 Before Dunn could get outside, the driver emerged from the passenger side of the offending pickup truck and started running as blood dripped from his injured body.

"He went east down Chamber," Jeanpierre told the operator.

"It's a trail of blood, too, to where he ran," another caller pointed out.

"We practically solved it for ‘em," Dunn said after Jeanpierre quickly prepared a thumb drive for police with surveillance video of the crash and the suspect's limping departure. 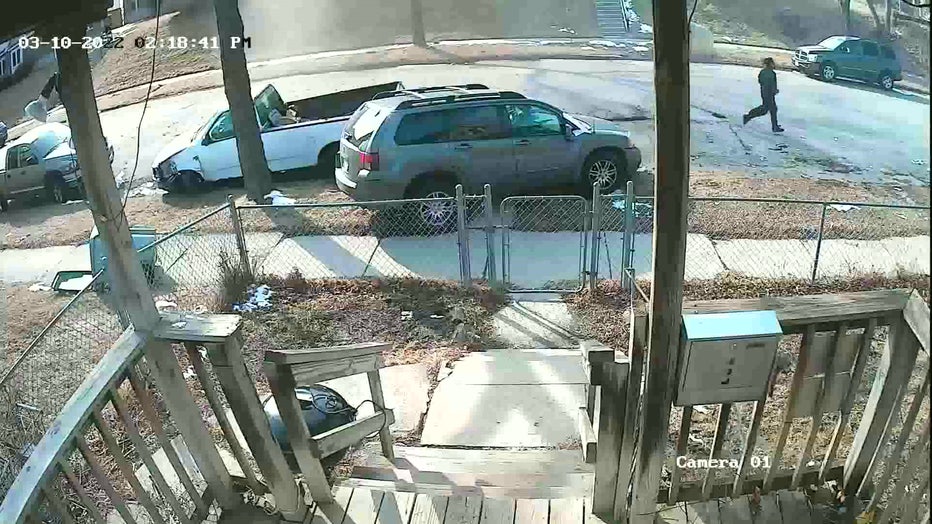 The driver of the white pickup truck runs away from the scene as neighbors try to summon police.

"I’m only two blocks away. You should’ve been here," she said, referring to the District 5 police station less than a half mile down Locust.

"We were all kind of flabbergasted," said Pam Deveau, who also experienced a frustrating wait for police response. Last winter, Deveau was passing through the intersection of 6th and Grange when she came upon a serious crash.

A semi had collided with a small passenger car, then veered off the road into a private driveway and a residential garage.

"But you don’t know if anyone needs an ambulance," a 911 operator asked the semi driver, who walked away unharmed.

Having been told that police were on the way, Deveau tended to a young woman who was sitting outside a badly damaged car.

"I didn't know if she was hurt. I didn't want her to go into shock," Deveau said, recalling how other witnesses grabbed some nearby construction cones to try and divert oncoming vehicles from passing through the debris. 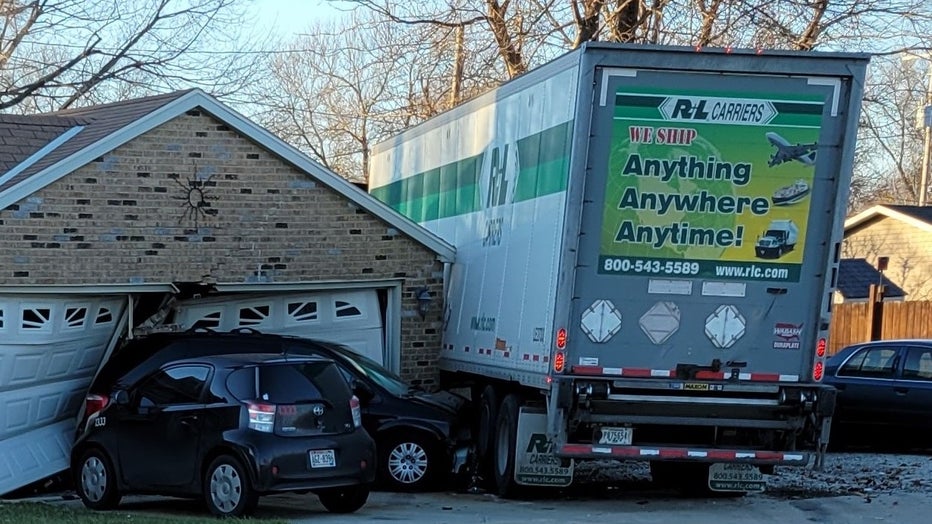 In December 2021, a semi crashed into several cars and a house near 6th and Grange. Citizens tried to block traffic themselves as they waited for a squad to arrive.

"We’re waving people away. People are having to turn around, and they’re mad," Deveau said.

"You guys are doing your own traffic control," said FOX6 Investigator Bryan Polcyn.

"They said that’s just kind of how it is right now," Deveau said.

"I pay your salary," Dunn said of her own wait.

Her neighbor was the first to reach 911 at 2:28 p.m, just as the driver was running away from the crash scene.

"[Police] could have caught him that day!" she said.

By the time police arrived at 3:30 p.m -- 35 minutes later -- the suspect was long gone. Four months later, no one has been charged with a crime.

FOX6 Investigators finds over the last three years, Milwaukee police response times are up in all police districts and at all priority levels. 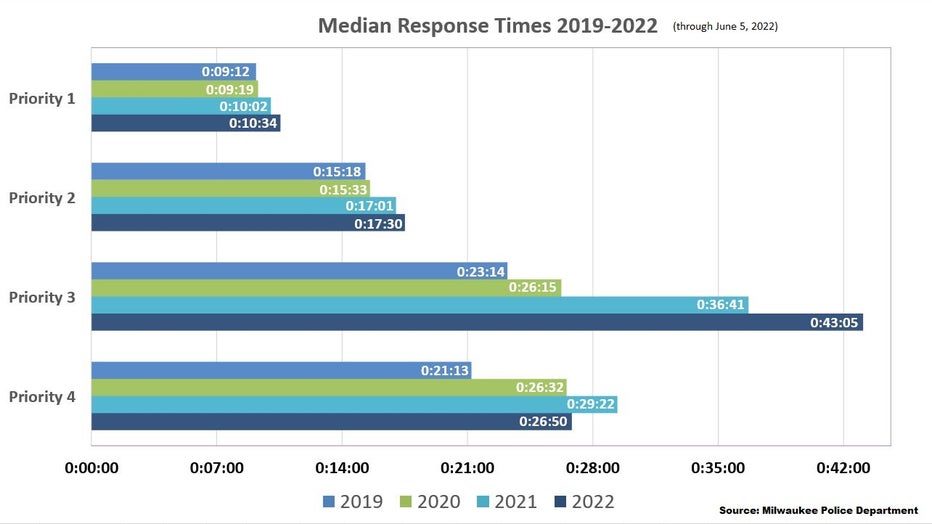 Priority 3 calls -- like burglary, battery, or theft where the suspect has left the scene -- have increased the most at more than 85%. Technically considered "not of an urgent nature," the time to respond to those calls has increased from an average of 23 minutes, 14 seconds in 2019 to more than 43 minutes so far in 2022.

In other words, you could drive the speed limit from downtown Milwaukee all the way to Oconomowoc before Milwaukee police respond to a break-in just a few blocks down the street.

"Do you feel right now that the community members of Milwaukee are getting the best service, the service they should be getting from Milwaukee police?" asked Polcyn. 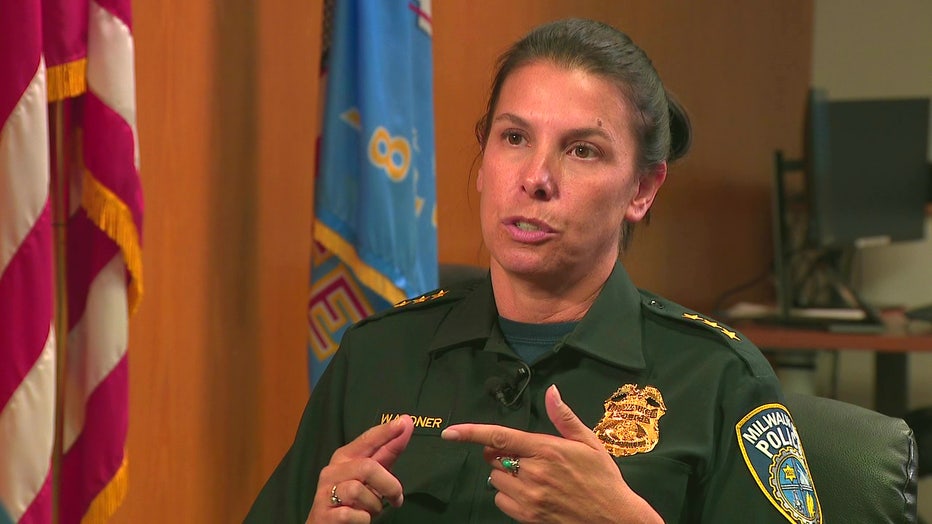 "Do I wish that I had more to do more with?" Waldner said. "Absolutely."

The 25-year veteran of the Milwaukee Police Department says resource-intensive crimes like homicides and non-fatal shootings are up at the same time the department is placing an added emphasis on stopping reckless drivers and catching car thieves.

"So it’s like, this shell game of priorities right now," Waldner said.

And that means less urgent calls take a back seat.

"The [priority] threes, those things can sit for a while," Waldner said.

Wagner says the problem is not just fewer squads responding to crimes but fewer detectives left to solve them. It's one reason, he says, that homicide clearance rates have dropped under 50%.

"That’s one in two people getting away with murder," Wagner said.

"Do we need more?" Waldner said. "Yes, because people will get burnt out."

"There needs to be more officers," he said, though he declined to say how many. "The problem is I've got to be able to pay for it." 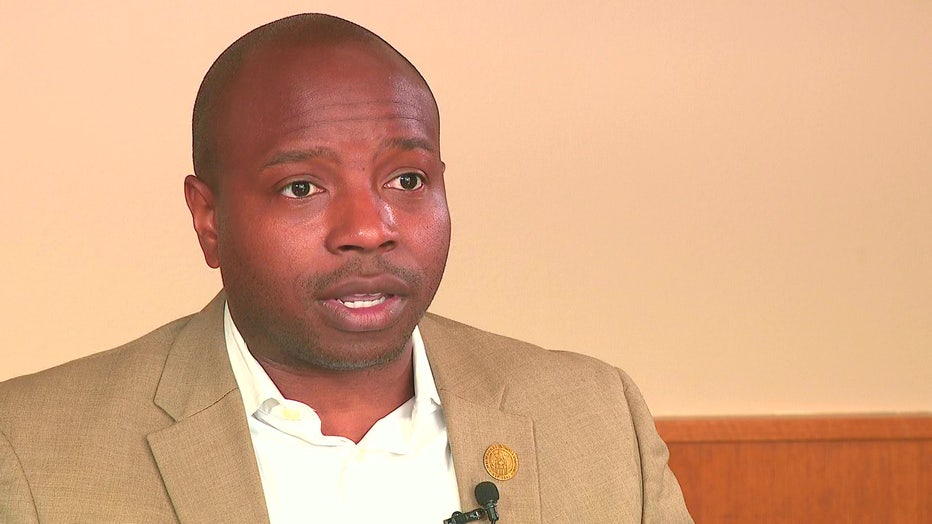 Mayor Cavalier Johnson says he "wants" to hire more officers, but says the city is in a "dire fiscal situation."

Without a little help from state lawmakers, Mayor Johnson says revenue limits and a looming pension crisis could prevent him from hiring the officers the city needs.

"We’re in a dire fiscal situation in the city of Milwaukee," Johnson said.

Then again, even if Milwaukee had the money, the department is struggling to find people who want to be police officers.

"We're trying to recruit as much as we can, but so is everybody else," Waldner said.

Sharlen Moore isn't so sure more cops is the answer anyway.

"We need to reimagine what public safety looks like," said Moore, the executive director of a youth leadership program called Urban Underground.

"I know some people quiver when they hear the term 'defund,' but I look at it more as, I equate it more to, how do we distribute resources more equitably?"

Moore says the city's young people should be part of the conversation.

"I do believe if we engage youth in healthier activities that will cut down," said her son, Malachi Moore.

"What is causing them to do these things? So we can reduce the amount of calls in general," said Kendall Harris, also with Urban Underground. 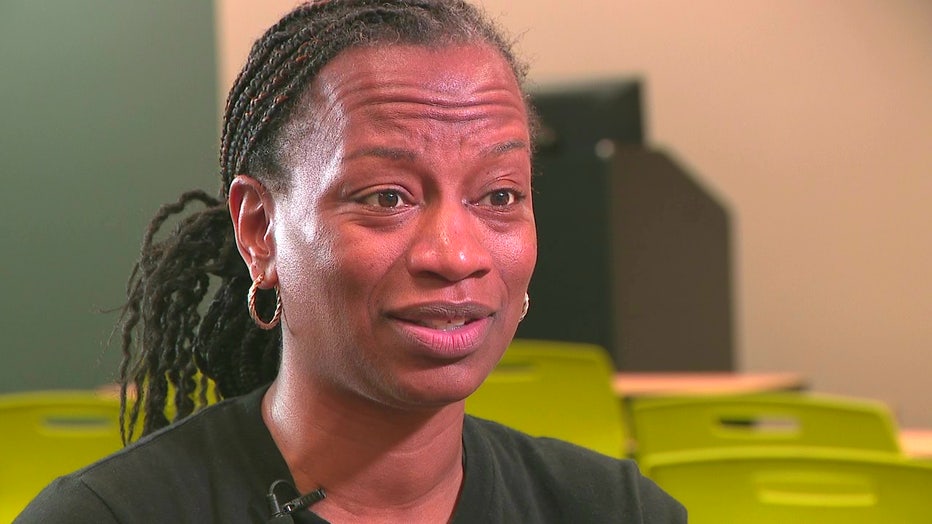 The Urban Underground youth suggested police resources could be steered toward civilian organizations that can handle less urgent but still important calls.

"Not everything can be handled with an arrest," Waldner said.

The assistant chief says if they can hire more civilian community service officers, they might be able to handle some lower priority calls, freeing up sworn officers to handle focus on life-threatening situations.

She also wants to see an increase in accessibility to social workers who can help hook up repeat 911 users with services that could prevent calls in the future.

However, she's hesitant to say those calls don't need a police response.

"The problem is, you just never know what you’re getting until you get there," she said.

If there's one thing everyone seems to agree on, it's the importance of feeling safe.

"We all want to live in safe neighborhoods and safe communities," Moore said.

"Those people living in those neighborhoods care," Wagner said.

"When people who work and work hard every day come home," Dunn said. "They don’t want to come home to worrying about people who are just lawless."

And when they call police, they want to know help is on the way.

When the Milwaukee Common Council approved the 2022 budget last fall, it included funding for 195 new police officers to fill vacancies due to retirements and other departures.

Since then, the Milwaukee Fire and Police Commission has appointed just 58 new police officers, in part due to a lack of eligible applicants.