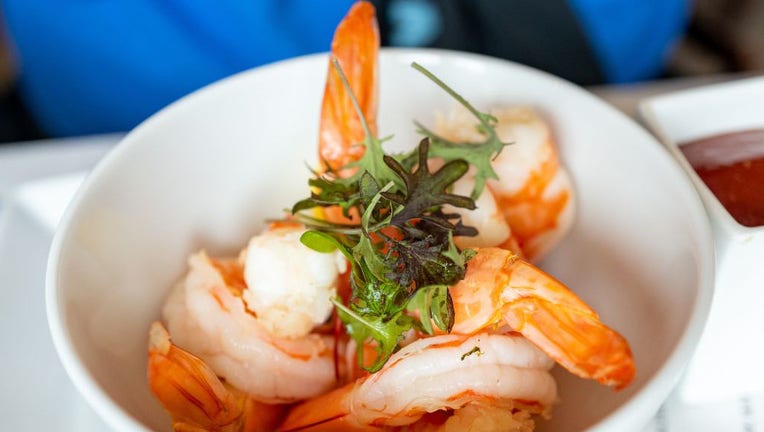 Shrimp cocktail in a bowl at a restaurant in California, May 27, 2022. (Smith Collection/Gado/Getty Images)

If you’re planning to dine out at a restaurant, there’s a chance your entrée may look a little smaller, and this is upsetting consumers who are venting their frustration on the website Yelp referencing shrinkflation in their reviews.

For the first time, consumers mentioned "shrinkflation" in their reviews, Yelp explained in a new report monitoring economic activity for the second quarter of 2022. Shrinkflation, a combination of the words shrink and inflation, refers to downsizing a product to meet the demands of inflation.

Yelp’s report cites reviews from customers who experienced inflation at restaurants and food businesses. Most of the "shrkinflation-related" complaints were among customers who visited restaurants serving menu items, including hot dogs, hamburgers, and pizza.

Customers in their reviews also griped about portion sizes at seafood restaurants and restaurants serving Italian or Chinese food.

With inflation impacting the nation, Yelp shared that 47 states indicated mentions of inflation in their reviews in the second quarter compared to 35 states in Q2 last year.

"The first half of 2022 has been challenging for people and businesses alike. Yelp data shows that while consumers have steadily experienced increased inflation since 2021, they’re particularly feeling the effect this year. Inflation mentions in Yelp reviews are increasing more than ever before, and for the first time, we’ve seen mentions of shrinkflation-related experiences. That said, people are resilient and adapting," Pria Mudan, Yelp’s data science leader, said in a statement provided to FOX Television Stations Thursday.

RELATED: Here's how much more you'll be paying for food in 2022, according to USDA estimates

Mudan added: "While consumers searched for fewer higher priced businesses in Q2 2022 compared to Q1 2022, perhaps in response to inflation, they still searched for higher-priced businesses more frequently than prior to the pandemic – an encouraging indicator that intent to spend at higher priced businesses is still strong. The first half of the year also saw consumers booking reservations further in advance than before, and a relative increase in searches related to electric vehicles, presumably to alleviate the burden of increasing gas prices. As people continue to settle into a new normal, Yelp data shows how they’re finding ways to adapt amid new economic challenges."

As the costs of goods and services surge this year, consumers can expect to pay more for food at the grocery store and while dining at restaurants, according to predictions from the U.S. Department of Agriculture in May.

The Food Price Outlook 2022, a Consumer Price Index for food that measures inflation released by the USDA’s Economic Research Service, states that food prices in March 2022 were 8.8% higher than a year prior.

RELATED: What is shrinkflation? How companies hide inflation without increasing prices

Overall, the index estimates that food prices at grocery stores and supermarkets will increase between 5% and 6% this year, while restaurant prices are projected to jump between 5.5% and 6.5%.

As long as the current wave of inflation lasts and manufacturers’ bottom lines are under pressure, experts say producers will continue to look for ways to directly or indirectly raise their prices.

In March, the Federal Reserve launched a high-risk effort to tame the worst inflation since the early 1980s, raising its benchmark short-term interest rate and signaling up to six additional rate hikes this year.

The central bank's policymakers expect inflation to remain elevated, ending 2022 at 4.3%, according to quarterly projections they released Wednesday. That's far above the Fed's 2% annual target. The officials also now forecast much slower economic growth this year, of 2.8%, down from a 4% estimate in December.

FOX 5 New York and FOX 32 Chicago contribute to this story. This story was reported from Washington, D.C.