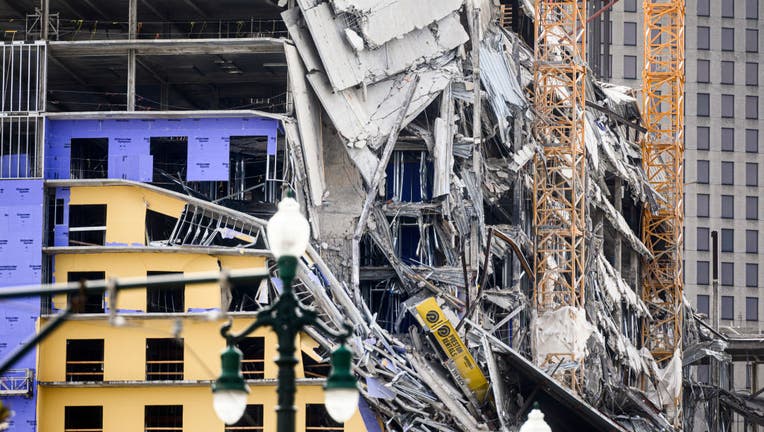 The Hard Rock Hotel partially collapsed onto Canal Street downtown New Orleans, Louisiana on October 12, 2019. - One person died and at least 18 others were injured Saturday when the top floors of a New Orleans hotel that was under construction colla

NEW ORLEANS – Grisly photos surfaced on social media appearing to show the legs of a New Orleans Hard Rock collapse victim whose body was uncovered when a tarp shifted.

The graphic photos were posted to Twitter on Tuesday, Jan. 21.

Several floors of the partially-built French Quarter hotel crashed down on each other October 12, 2019, sending a large portion of the building toppling down onto Canal Street. Three people died and dozens were hurt.

WGNO reached out to Mayor LaToya Cantrell’s office to confirm the validity of the photos, and received the following statement:

“A tarp put in place to conceal the remains of one of the victims of the Hard Rock collapse has been shifted by the wind— potentially exposing those remains. The condition of the building and the altitude above street level complicate efforts to replace the tarp, as they have prevented recovery thus far. To be clear: capturing or sharing images of the victims in such a condition is irresponsible, it is indefensible, and it is not who we are as New Orleanians. Out of respect to the victims and their families, and in the name of basic common decency: we urge news outlets, residents, and social media users to have nothing to do with making a tragic situation needlessly worse.”

It is unclear who the victim is, or when the tarp will be put back over the body.

On Friday, more than three months after the collapse, Mayor Cantrell said at a press conference that city officials are now preparing a plan they once rejected – the implosion of the building. The recovery of the bodies would come after the implosion, which could happen as early as March, Cantrell said.

"(Implosion) has always been the safest," Cantrell said Friday. "When you think about the bodies in there and that traditional picking-apart demolition seemed to be the best option, but it's not. It's just not."

To ensure the safety of the implosion, the city plans to demolish three adjacent buildings as well.