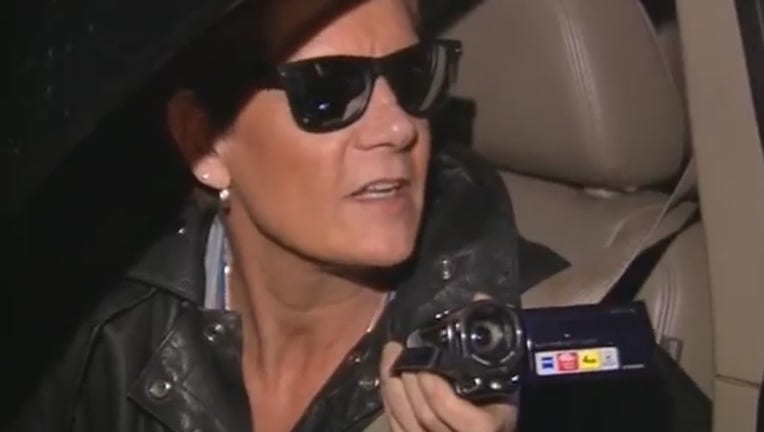 Lori Christensen speaks to FOX 9 during an interview in February 2011.

Her exploits are also keeping one couple from selling their home and escaping.

FOX 9 report from February 2011 by Tom Lyden on Lori Christensen, the so-called ‘Neighbor From Hell.'

The Ramsey County Attorney’s Office has charged Christensen, 58, with two counts of stalking. If convicted, it would be her third violation in ten years.

Christensen first made headlines in February 2011 when FOX 9 Investigator Tom Lyden reported on Christensen’s off-the-wall behavior. At that time, she was harassing Greg and Kimberly Hoffman, who were forced to leave their neighborhood.

In 2012, a Ramsey County Judge sentenced her to jail for 90 days and she could not be within a mile of her house at Homewood Place in White Bear Lake.

Christensen apparently moved to the 5200 block of East Street in neighboring White Bear Township, and the trouble began all over again.

The latest homeowners, identified in the complaint only by their initials, said Christensen began stalking them when they moved there in 2016.

They said Christensen would constantly videotape them and post ‘no trespassing’ signs facing their yard. Christensen also setup a mannequin that peered into their backyard. They even accuse her of cutting their television cable.

The couple said they were forced to move because of the endless harassment and last month placed their home on the real estate market.

But the homeowners and four separate real estate agents say Christiansen began harassing prospective buyers and their agents during showings.

Christensen allegedly videotaped Asian clients touring the backyard of the home, then parked her car nearby and put Donald Trump banners on the car.

When one realtor was leaving the property he said Christensen approached his car and yelled, "Go back to your f—-ing country and get the f—k out of my neighborhood." She then "slapped her ass" in front of him.

"My buyers actually like the house and really liked the location," one realtor said. "But we had an encounter with the neighbor which completely convinced the buyers that they wouldn’t make an offer on the house.  And the mannequin head on the stake really unsettled them."

Another realtor said during a showing she was telling prospective buyers there was a fire in the house and the previous owners had been smoking methamphetamine.

The realtor said his buyers "love the home and property," but "crazy neighbor lady was the biggest factor. Scared my buyers away as she’d be too high maintenance for my buyer’s family."

Since the first report was on FOX 9 a decade ago, Christensen’s exploits have appeared on ABC’s 20/20 and NBC’s The Today Show.