KANSAS CITY, Mo. -- "Homeless veteran." It's a stinging coupling of words in a nation that prides itself on the reverence placed on military service. Unfortunately, reverence doesn't keep out the rain.

Enter a community group in Kansas City, Mo., that believes tiny houses will provide thousands of the city's veterans a home.

More than 37,000 American veterans are homeless, according to the most recent count from the Department of Housing and Human Development. While that number represents a 50-percent drop since 2010, there are still more than 22,000 living in temporary shelters and over 14,000 "living in places not meant for human habitation," according to the department. 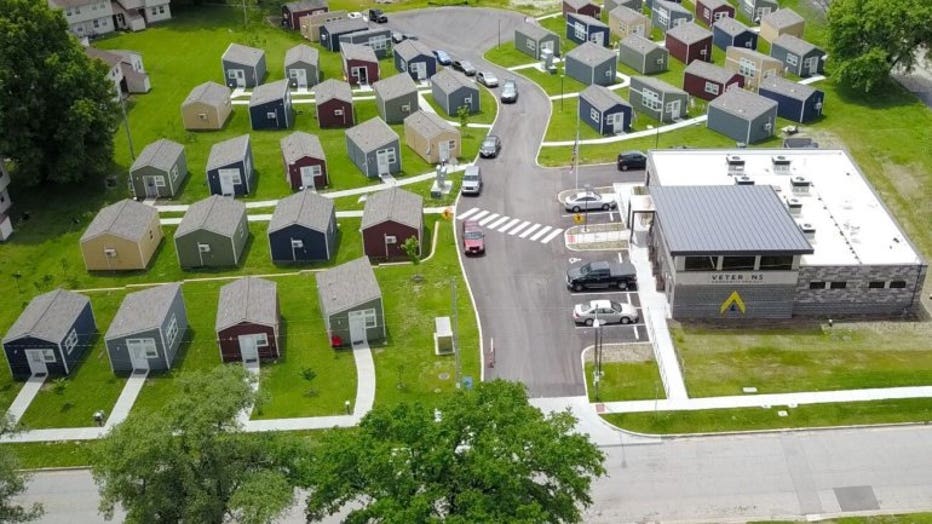 The Veterans Community Project has built a village of transitional homes and services for veterans in Kansas City. (VCP via FOX)

The Veterans Community Project (VCP), a nonprofit group based in Kansas City, has made it a mission to provide transitional homes and services to veterans, one community at a time.

“I think veteran homelessness has always been viewed as a federal issue or a VA issue, that it's not something a local community can take on and address,” Byran Meyer, CEO and co-founder of Veterans Community Project (VCP), told Fox News. “These veterans are sleeping in city parks and streets. They're our neighbors and brothers and sisters of our community. We can do something without waiting for somebody else to come in and fix this.”

“We just took the mentality, and it's a very kind of military mentality, that we are going to figure this out,” Meyer said. “Then we just started putting one foot in front of the other.” 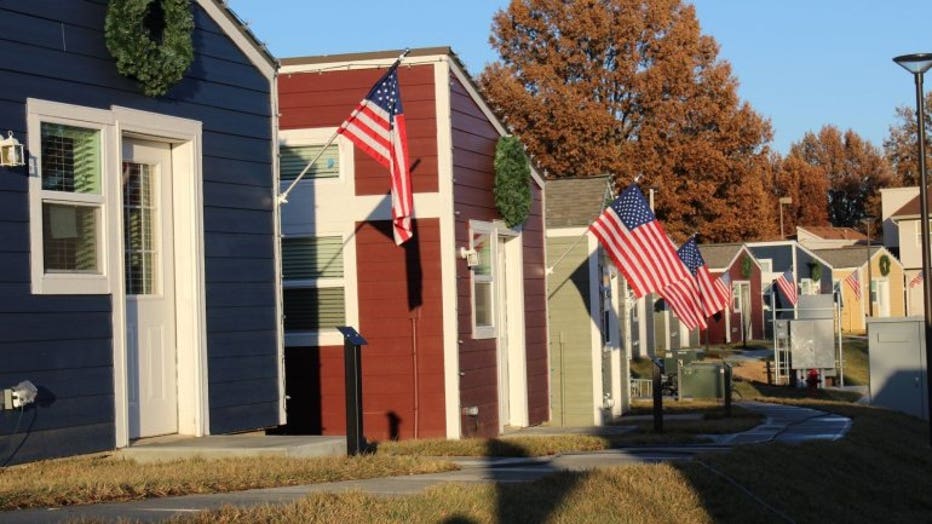 The group went out and engaged the homeless veteran population in Kansas City to find out why they were living on the streets or in parks as opposed to living in a shelter or a transitional living facility. They then took the feedback they received and decided to build a village of tiny houses that provide the veterans with “privacy, a sense of security and the ability to reintegrate at a comfortable pace.”

VCP Village was completed in 2019 and consists of 49 tiny houses that sit on five acres of land purchased from Kansas City for $500. The houses resemble military barracks and range in size from 240 to 320 square feet.

There is also a 5,000-square-foot community center on-site to provide services such as mentoring, case management and counseling. Other services include a medical and dental facility, a veterinary clinic, and a training and commercial kitchen.

Meyer says the community center is also good for morale.

“There's this huge sense of belonging because you have a population of people that all have a shared experience in terms of military service, and it gives them this instantaneous bond," he said. "You see them really develop and make friendships and hang out with each other.” 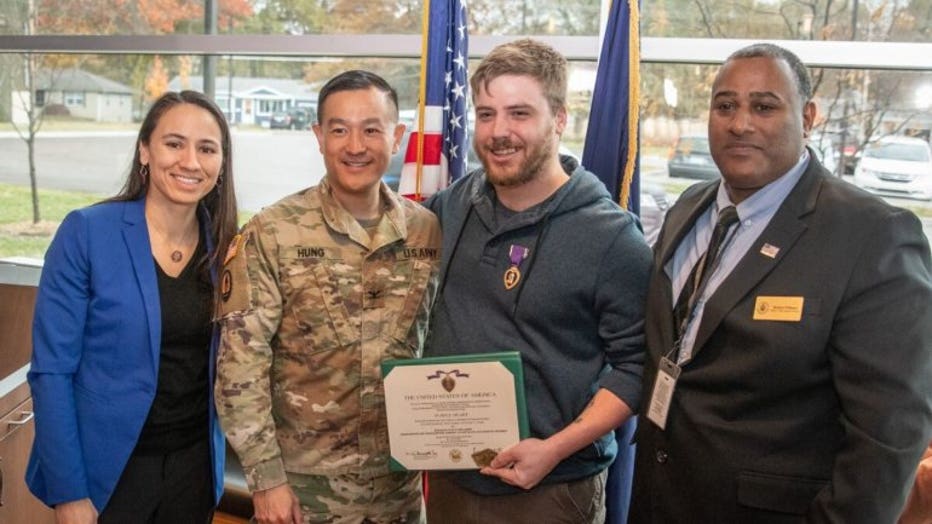 Since they’ve opened their doors, VCP has assisted both male and female veterans from all branches of the military. They have helped veterans a young as 24 and as old as 84. The average veteran stay is currently 275 days.

“We're here with a bunch of other veterans that are going through similar situations," VCP resident and veteran Kyle Prellberg told Fox News. “It a pretty great environment and I absolutely love it.”

A former U.S. Army sniper, Prellberg served with the 3rd Brigade, 2nd Infantry Division, and completed combat tours in Iraq and Afghanistan. In 2012, near Kandahar, on his way to help train the Afghan Army, his truck was hit by a rocket-propelled grenade that severely wounded his leg.

“I’ve dealt with a lot of depression, anxiety, panic attacks, that kind of stuff. And PTSD as well,” he said.

Prellberg was awarded the Purple Heart in 2019 with the help of Kansas Rep. Sharice Davids. After the ceremony, he went out to dinner with some other wounded veterans and met some people from VCP who told him about their program. In January, Prellberg was accepted and moved into one of the tiny houses.


“I went from a place where I was couch surfing,” he said. “And to have a place that’s your own is just enormously helpful.”


Meyer said he is optimistic about Prellberg’s progress.

“He has become a leader in the community, welcoming new veterans that have just moved in and been an example in our recent Battle Buddy Program," he said. "Kyle and his case manager have been actively working through the red tape of increasing his disability percentage through the VA and exploring employment options in the near future.” 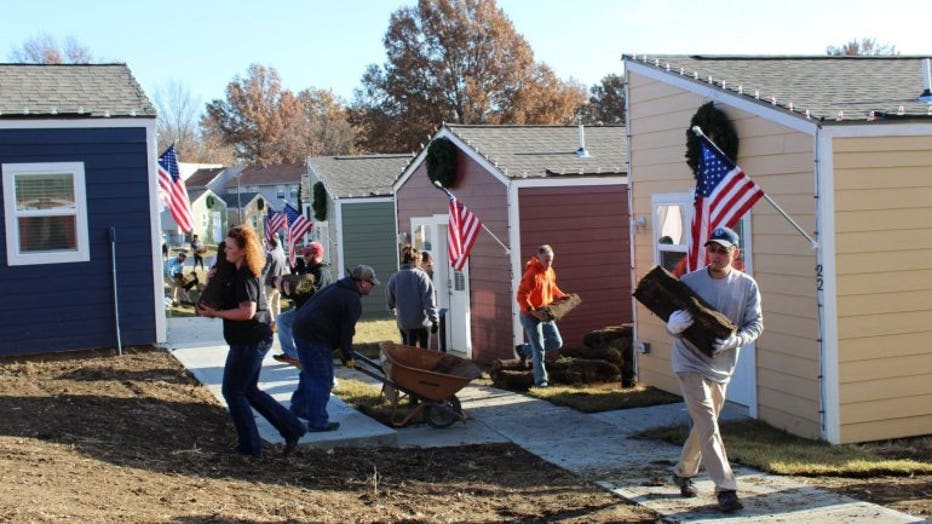 VCP is 100 percent funded by donations and relies heavily on local community partnerships and volunteers.

“We have more volunteers sometimes than I even know how to keep engaged, because everybody wants to help,” Meyer said. “The volunteer labor isn't just about cutting costs. It's also about the community feeling like they own the projects too.”

Several hundred cities across the country have contacted VCP about building villages in their areas. The first satellite VCP Village will be built in Longmont, Colo., with plans also underway to expand into Cincinnati, St. Louis and Orlando, Fla.

Part of their expansion plan includes having a good relationship with local Veterans Affairs (VA) offices in each city.

“Every place we go into, we truly want to establish that relationship because our entire intent is to kind of fill gaps in some of the services out there,” Meyer added. “We don't want to compete with anybody. We don't want to duplicate what the VA is doing.”