Passengers describe the crash of Flight 214

Passengers describe the crash of Flight 214

(CNN) -- Asiana Airlines Flight 214 was seconds away from landing when the passengers sensed something horribly amiss.

The plane was approaching San Francisco International Airport under a beautifully clear sky, but it was flying low. Dangerously low.

Benjamin Levy looked out the window from seat 30K and said he could see the water of the San Francisco Bay about 10 feet below.

Even for an airport where landing strips run close to the water, the descent seemed alarming to the San Francisco man.

Further back in the Boeing 777, Xu Das had the same realization.

"Looking through window, it looked on level of the (sea)wall along the runway," he posted on Weibo, China's equivalent of Twitter.

Then, with no warning from the cockpit, the plane slammed onto the edge of the runway. The impact severed the plane's tail and sent the rest of it spinning on its belly.

A massive fireball and clouds of smoke shot skyward. First responders rushed to the scene as horrified onlookers at the airport terminal feared the worst.

Medics found the bodies of two Chinese girls on the runway, next to the burning wreckage. The airline identified the girls as students Wang Linjia and Ye Mengyuan, both 16. 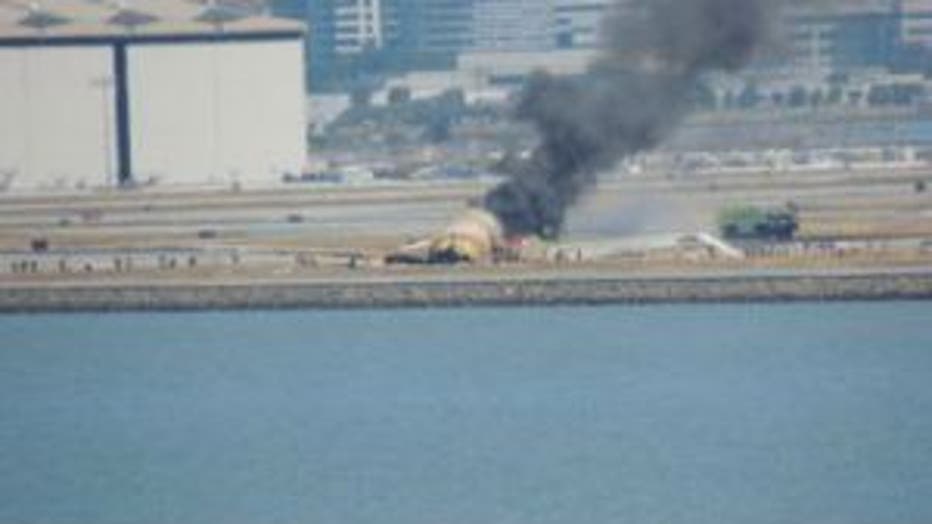 Remarkably, 305 others on the plane survived the crash Saturday morning. At total of 70 Chinese students and teachers were headed to summer camp in the United States, China's state-run Xinhua news agency reported.

When rescuers arrived, they found some passengers coming out of the water.

"There was a fire on the plane, so the assumption might be that they went near the water's edge, which is very shallow, to maybe douse themselves with water," Hayes-White said.

While 182 of them were taken to hospitals with injuries ranging from spinal fractures to bruises, another 123 managed to escape unharmed.

Some jumped out or slid down emergency chutes with luggage in hand.

The crash ended an otherwise mundane flight that originated in Shanghai, China. It made a connection in Seoul, South Korea, before flying 10 hours to San Francisco. 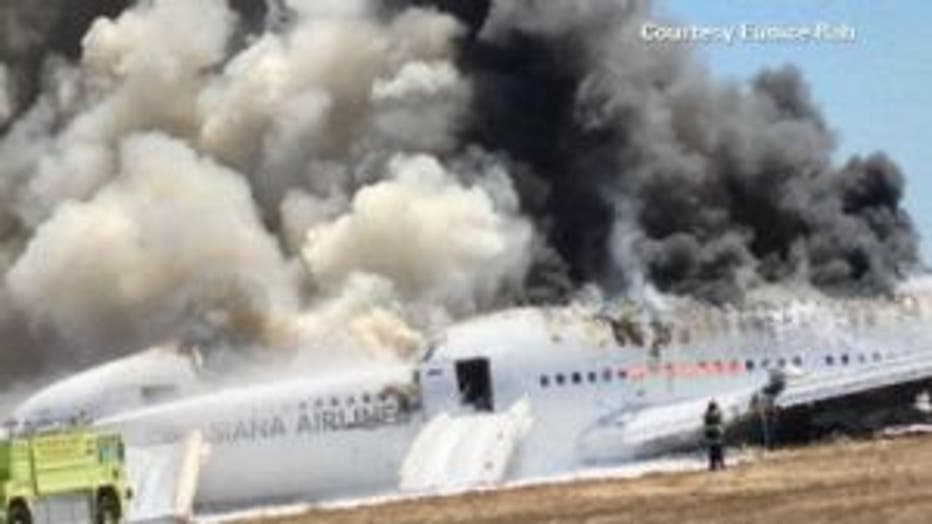 Among the 291 passengers were 141 Chinese, 77 South Koreans, 61 Americans and one Japanese, Asiana Airlines said. The airline is one of two major airlines in South Korea; the other is Korean Air.

At the helm of the plane was one of Asiana's veteran pilots who had been flying for 17 years, the airline said Sunday. Three other pilots were also on board, working in shifts.

Once the plane fell short of the runway, passengers found themselves on a roller coaster.

"I thought as the plane was landing, it looked like the pilot was trying to take off again," passenger Noni Singh said.

"And then just boom, the back end just hit and flies up in the air, " Elliott Stone, another passenger, said, "and everybody's head goes up to the ceiling."

Dark gray smoke rose from the plane as it lay on its belly, with no landing gear evident.

Its roof was charred and, in spots, gone. The back of the plane had been lopped off entirely.

Flames and smoke burst out of its windows.

"Honestly, I was waiting for the plane to ... start flipping upside down, in which case I think a lot of people would have not made it," Levy said.

"If we flipped, none of us would be here to talk about it."

Xu and his wife were among the fortunate.

"We quickly slung on luggage and grabbed our child and walked toward the back," Xu said on Weibo. "Saw the kitchen at back mostly disappeared. A huge hole -- very round. We quickly rushed out. Only after coming out did we see three of us had slight bruises."

Exactly what caused the crash could take up to two years to determine, said Choi Jeong-ho, head of South Korea's Aviation Policy Bureau.

South Korean investigators will work alongside officials from the U.S. National Transportation Safety Board.

The flight recorders from the plane have been recovered and are on the way to Washington, the NTSB said Sunday.

The airline purchased the plane, a Boeing 777-200, in March 2006. Asiana CEO and President Yoon Young-doo said there was no engine failure, to his knowledge.

"The company will conduct an accurate analysis on the cause of this accident and take strong countermeasures for safe operation in the future with the lesson learned from this accident," Yoon said.

Many of those who survived the crash chalked it to divine intervention.

"I think it's miraculous that we have survived because things could have been much worse," said passenger Vedpal Singh.

Sheryl Sandberg, Facebook's chief operating officer and author of the book "Lean In," was supposed to be on Flight 2014. But she switched to a United flight, arriving about 20 minutes before the Asiana flight crashed.

"Serious moment to give thanks," she wrote on her Facebook page

Not the first time

Prior to Saturday's disaster, Asiana Airlines endured two deadly crashes over the past 20 years.

In 1993, a crash near South Korea's Mokpo Airport killed 68 of the 116 people on board. The Boeing 737-500 went down in poor weather as the plane was attempting its third landing, the Aviation Safety Network said.

And in 2011, a cargo plane headed from Seoul to Shanghai slammed into the East China Sea, killing the only two people on board.

Perhaps one of the reasons so many people survived Saturday's crash was because the Boeing 777 is built so that everybody can get off the plane within 90 seconds, even if half the doors are inoperable.

Yoon, Asiana's president and CEO, told reporters he could not confirm many details of the crash, pending the investigation.

But he started the press conference by bowing his head in apology.