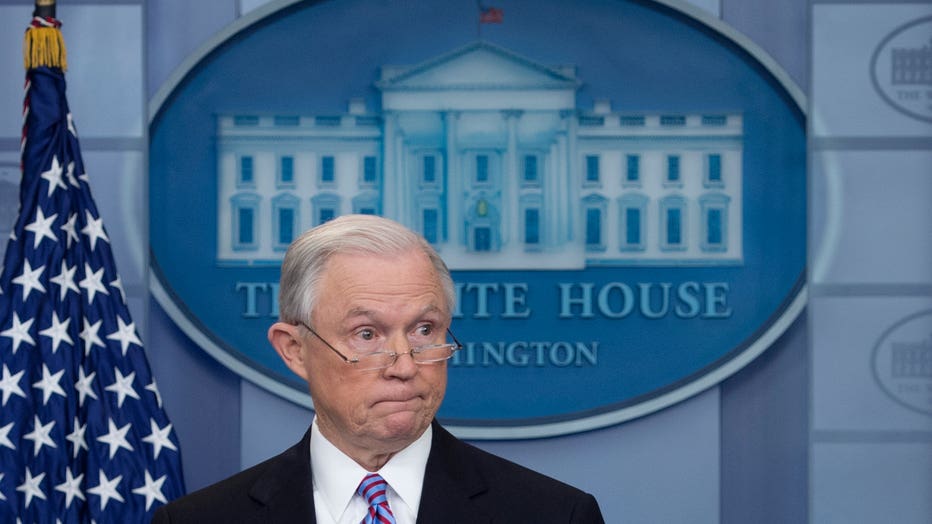 $4.1 billion in federal funds at stake

Attorney General Jeff Sessions reiterated on Monday that the Trump camp plans to follow through on its long-running promise to crack down on so-called sanctuary cities, outlining how the administration will withhold billions in federal funding to rebellious jurisdictions — money, the cities claim, that is used to fight crime and terrorism.

Sessions said that the Justice Department expects to awards more than $4.1 billion in grants to state and local law enforcement agencies this year. But to receive a payout, local jurisdictions must prove that they’re following federal laws that require local authorities to share individuals’ immigration statuses with federal agents.

Some of the U.S.’s biggest cities — such as Los Angeles, New York, San Francisco, and Chicago  — have policies and practices in place to shelter undocumented immigrants by limiting how much local officers must comply with federal immigration officials.

Sessions argues that the crackdown is a way to keep Americans safe from undocumented immigrants who commit crimes in the U.S. “I strongly urge our nation’s states and cities and counties to consider carefully the harm they are doing to their citizens by refusing to enforce our immigration laws, and to rethink these policies,” Sessions said at a Monday afternoon press briefing at the White House. He didn’t detail which cities would be affected under the policy.

“The funding they’re threatening is the very same funding that protects us and allows us to fight terrorism,” New York City mayor Bill de Blasio said in a Monday interview with NY1.

Sessions insisted on Monday that he is not creating new policy — instead, he’s cracking down on an order implemented under former president Barack Obama. In July 2016, the Department of Justice under Obama rolled out updated guidelines saying that local jurisdictions applying for federal funding must prove that they’re following the federal code 8 U.S.C. 1373.

The 1996 code says that cities and states cannot restrict officials from communicating with agents from Immigration and Naturalization Service (which was replaced in 2003 by the United States Citizenship and Immigration Services) about “information regarding the citizenship or immigration status, lawful or unlawful, of any individual.”

It’s unclear if any sanctuary cities  lost funding after the Justice Department issued the July 2016 guideline — especially because refusing to report undocumented immigrants to federal agents is only one of many policies that sanctuary cities use to shelter undocumented community members. The existing statute also only applies to one specific federal agency, not the entirety of the Justice Department.

In addition to refusing to report the immigration status of individuals to federal officers, some sanctuary communities also refuse to detain undocumented immigrants eligible for deportation until immigration officials can pick them up if there is no other cause to hold them. (Those people are typically brought into police custody for questioning, or are charged with low-level crimes.) Other cities simply refuse to ask individuals about their immigration status. Neither of those two practices are currently forbidden under federal law.

Team Trump has long promised to whip sanctuary cities into compliance. On the campaign trail, then-candidate President Trump frequently invoked the names of Americans killed by undocumented immigrants as justification for cracking down on sanctuary communities.

In January, just days after he took office, President Trump signed an executive order directing the Department of Homeland Security to review — and possibly strip — federal funding for sanctuary cities. That order does not apply to federal money that goes toward law enforcement agencies, but instead targets funding that cities use for housing, health services, and education. A Reuters analysis found that the 10 biggest sanctuary cities could lose as much as $2.27 billion.

Several cities, including San Francisco, sued over the executive order. No city has yet been defunded .

Ever since President Trump wrote his January executive order threatening sanctuary cities, the cities’ leaders  have vowed to fight back — promising lawsuits and filing legal motions to bar the order.

Sessions’ Monday comments re-committing to the crackdown prompted sanctuary cities to renew their promise to fight back.

“We’ll go to court,” de Blasio said when asked how far he’d be willing to go to challenge Sessions’ policy promise and the in-limbo executive order. “We believe the executive order is readily challengeable in court.”

Denise Simmons, the mayor of the sanctuary city of Cambridge, Mass., was equally defiant.

“We still remain strong in our stance that we will remain a sanctuary city,” Simmons told the Boston Globe, adding that Sessions’ comments were “irresponsible and disgraceful.”

No new lawsuits have been filed in the wake of Sessions’ comments, but a hearing for San Francisco’s suit over President Trump’s January executive order is set for April 5.

“As we have always asserted, sanctuary cities are safer cities. When immigrants can enroll their children in school, access healthcare for vaccinations, and report crimes, our City and County is safer,” his office said in a statement. “It is shocking that the U.S. Attorney General, the nation’s top law enforcement official, does not agree with this basic principle of public safety.”