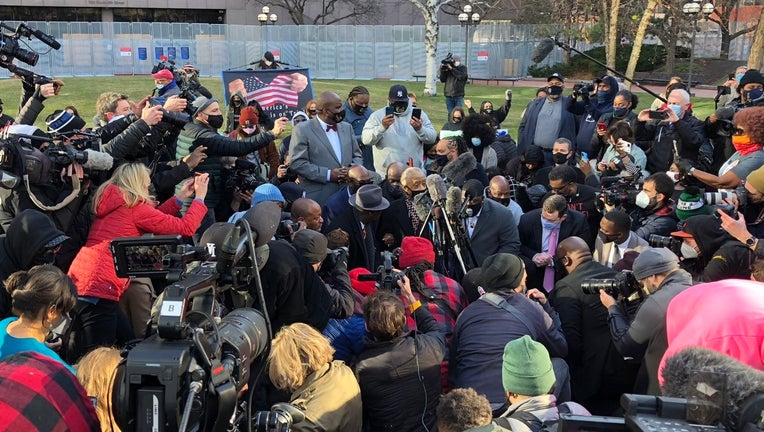 Rev. Al Sharpton and the family of George Floyd take a knee for 8 minutes and 46 seconds to honor Floyd ahead of the Chauvin trial.

MINNEAPOLIS (FOX 9) - Before opening statements began in the trial of Derek Chauvin, the former Minneapolis police officer charged in George Floyd's death, Reverend Al Sharpton urged Americans and people worldwide to join in a moment of remembrance for Floyd.

Sunday, Reverend Sharpton, while speaking at a vigil for Floyd in Minneapolis, called on people to join him along with members of the Floyd family as they take a knee ahead of court on Monday.

Rev. Al Sharpton and the Floyd family kneeled for 8 minutes and 46 seconds to honor George Floyd ahead of the Chauvin trial.

Sharpton held a news conference with Attorney Ben Crump at 8 a.m. ahead of the start of court. After the news conference, and before heading into the Hennepin County Courthouse, the group took a knee for 8 minutes and 46 seconds -- the same amount of time Chauvin kneeled on George Floyd during his death.

Rev. Sharpton said it was also intended to show people how long eight minutes and 46 seconds is.