MILWAUKEE -- A red-tailed hawk was being treated at the Wisconsin Humane Society's Wildlife Rehabilitation Center after it was struck by a vehicle on the freeway in far northwestern Milwaukee County on Wednesday morning, July 10.

Wildlife Rehabilitation Center officials said a call came in from the Milwaukee County Sheriff's Office, and the center's director, Scott, who lives near Holy Hill, wasn't far from the scene. They noted that like any good licensed wildlife rehabilitator, he had a pair of heavy, leather gloves and a pet carrier in his vehicle -- so he was prepared for this emergency.

When he arrived on scene, the hawk was still alive. While it was hanging in front of the vehicle's grille, it wasn't embedded in the grille. However, its left wing was wedged between the top of the grille and the vehicle's hood.

Scott took control of the hawk's talons, and the driver popped the hood latch -- freeing the hawk's wing.

The hawk was then taken to the Wildlife Rehabilitation Center for treatment in the ICU. Official said once he was more stable, they planned to take some X-rays to determine the extent of the hawk's injuries. 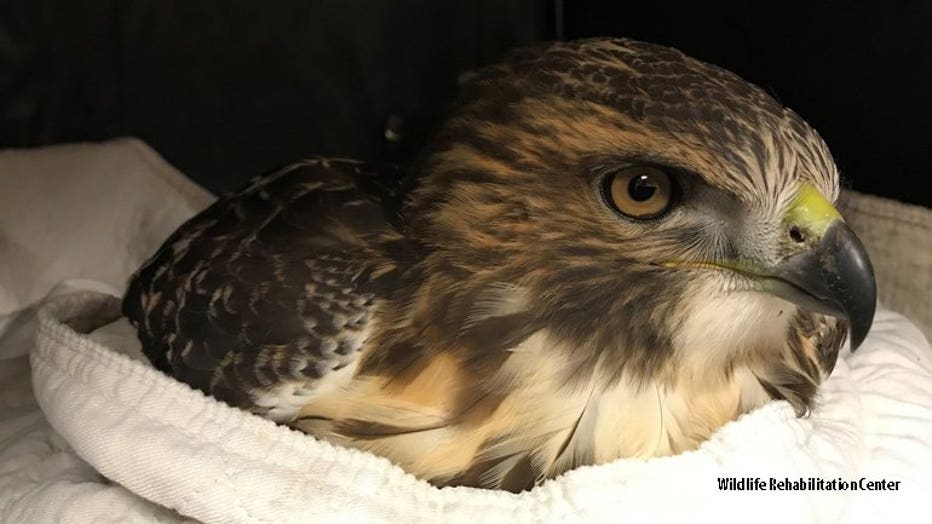 They thanked the driver for calling and waiting for help for the hawk, and the sheriff's deputy who called them.

CLICK HERE to learn more about the Wildlife Rehabilitation Center, or to make a donation to help this hawk and other animals in need.