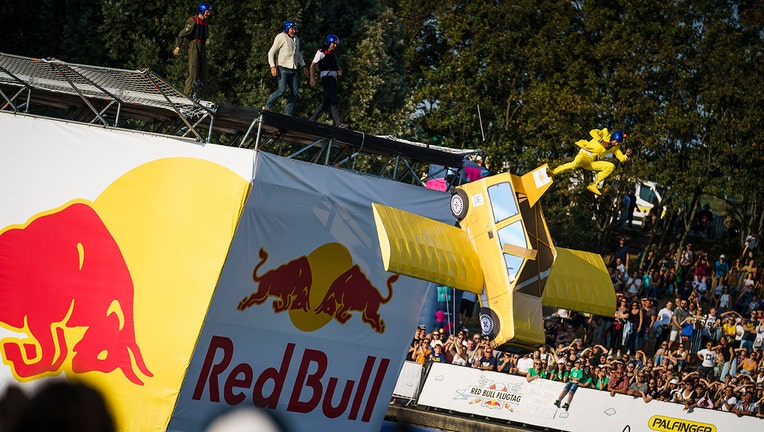 MILWAUKEE - Red Bull is looking for daring and creative teams to build handcrafted aircrafts to take to the skies in Wisconsin’s first-ever Red Bull Flugtag.

On July 16, teams comprised of up to five pilots will launch one-of-a-kind airships off a 27-foot-tall flight deck erected in Milwaukee's Veterans Park in front of an expected crowd of 40,000 spectators.

Up to 60 teams will be judged on the creativity of their craft design, their performance and the distance of their flight all while competing for exclusive Red Bull experiences, meet-and-greets with Red Bull athletes and more.

The winners will be determined by a lineup of area celebrities including:

"I'm so pumped to experience my first-ever Flugtag as a Red Bull athlete and a native Wisconsinite," said Lorenz. "Although I'm used to flying through the snow, I'm sure flying through the air is just as exhilarating. I can’t wait to see what my home state has in store."

Additionally, Red Bull is enlisting some of Wisconsin’s up-and-coming talent as personal coaches who will help teams enhance their stage presence, uplevel their craft design and grow their social followings.

One of them is Barrio Dance, a Madison-based dance crew known for their collaborative movements and immersive workshops, who will help teams come up with the best walk-in moments. Hot 105.7’s DJ Gee-A also joins Red Bull Flugtag as one of the event hosts who will help showcase participating teams.

Named after the German word for "flying day," Red Bull Flugtag has pushed people’s creativity to the limit for over 30 years. The legendary Red Bull event has been held almost every year in over 50 countries and hosted nine million spectators worldwide.

Over the years, Flugtag has seen winning crafts such as Snoop's Dogg House (San Francisco, 2003), Greased Lightning (Portland, Oregon, 2008) and Flight at the Roxbury (Pittsburgh, 2017). The World Record for the longest flight currently sits at 258 feet.

Teams and more surprises will be announced in the next few months.