About 4,000 residents in the southeastern town of Mallacoota in Victoria state fled toward the water Tuesday morning as winds pushed an emergency-level wildfire toward their homes. The smoke-filled sky shrouded the town in darkness before turning an unnerving shade of bright red.

About 5 million hectares (12.35 million acres) of land have burned nationwide over the past few months, with 12 people confirmed dead and more than 1,000 homes destroyed. Nearly 100 fires were burning across the state of New South Wales, which is home to Sydney.

"We've seen extraordinary fire behavior," he said Tuesday. "What we really need is meaningful rain, and we haven't got anything in the forecast at the moment that says we're going to get drought-breaking or fire-quenching rainfall."

The wildfire crisis has reignited debate about whether Prime Minister Scott Morrison’s conservative government has taken enough action on climate change. Australia is the world’s largest exporter of coal and liquefied natural gas. 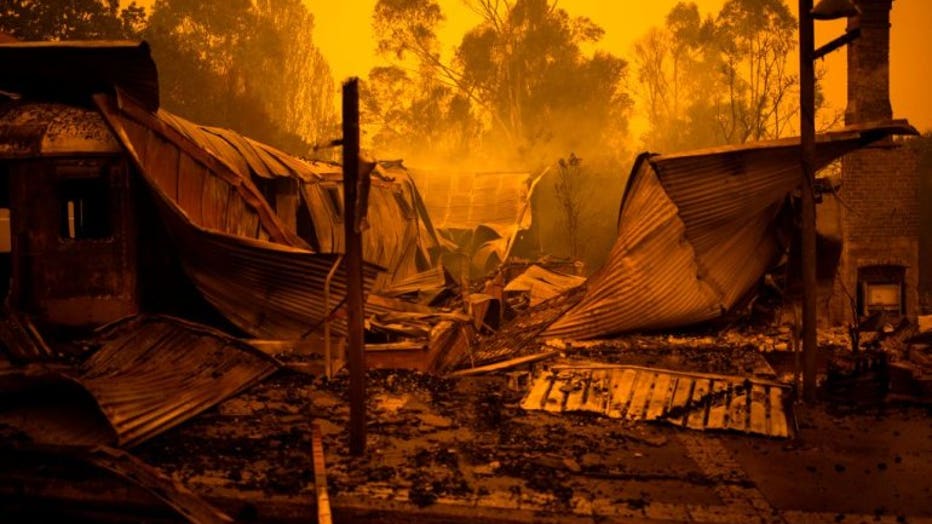 The remains of burnt out buildings are seen along main street in the New South Wales town of Cobargo on December 31, 2019, after bushfires ravaged the town. - Thousands of holidaymakers and locals were forced to flee to beaches in fire-ravaged southe

Morrison, whom critics have deemed a climate change skeptic, conceded earlier this month that “climate change along with many other factors” has contributed to the wildfires.

The prime minister took criticism for going on a family vacation to Hawaii in December during the crisis. He eventually cut his trip short and publicly apologized.

Late Tuesday, Mallacoota was saved by changes of wind direction, but authorities said “numerous” homes were lost. Residents returning home were urged to boil tap water before drinking it. Forest Fire Management Victoria said the wildfires had put heavy demands on tap water that is affecting the supply of water.

Stranded residents and vacationers were reported to be sleeping in cars on New Year’s Eve, while gas stations and surf clubs transformed into evacuation areas.

Andrews has requested assistance from 70 firefighters from the United States and Canada, while Australia's military sent air and sea reinforcements.

Some communities canceled New Year’s fireworks celebrations, but Sydney’s popular display over its iconic harbor controversially went ahead in front of more than a million revelers. The city was granted an exemption to a total fireworks ban in place there and elsewhere to prevent new wildfires.

Police in New South Wales said Tuesday that two men — a 63-year-old father and 29-year-old son — died in a house in the wildfire-ravaged southeast town of Cobargo, and a 72-year-old man remained missing.

On Monday, a firefighter was killed when extreme winds flipped his truck. Samuel McPaul, 28, was the third volunteer firefighter in New South Wales to have died in the past two weeks. He was an expectant father.

More than 130 fires remain burning across New South Wales, with five at an emergency level. Authorities warned that power would be out for 24 hours along the fire-ravaged south coast of the state.