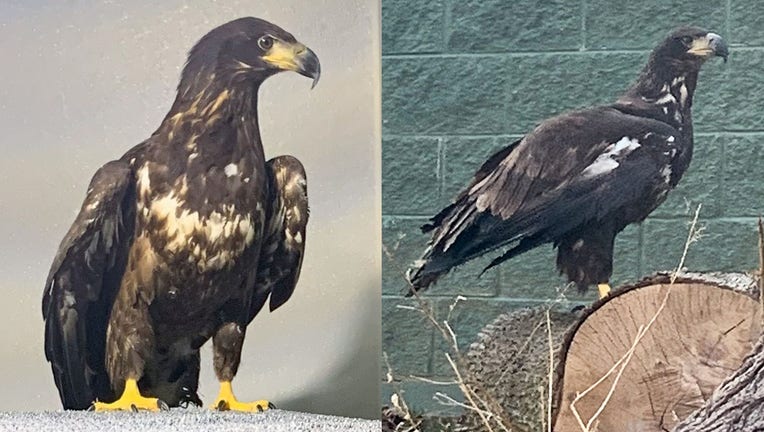 RACINE, Wis. - The Racine Zoo announced the arrival of its newest resident on Thursday, April 8 -- a 3-year-old male bald eagle.

Over a year of planning and construction, the Racine Zoo is excited to unveil the new exhibit and animal to the public.

With his young age, the eagle will not have a fully bald head until he reaches about eight years of age. The eagle was brought into the Southeastern Raptor Center in Auburn, Alabama with wing and leg injuries. After hard work to rehabilitate the bird, it was decided that he could not be released to the wild due to his asymmetrical flight, preventing him from catching adequate prey independently.

The decision was made to house him in human care, and plans began for him to eventually move to the Racine Zoo. Riders For Charity, a not-for-profit charity organization of motorcycle enthusiasts that benefit the Racine community, was instrumental in providing support for enrichment enhancing spaces for the eagle, training for staff and transportation.

A generous donation from the David A. Spaulding, "Skipper," estate, made this exhibit possible.

"David’s love for the zoo’s animals and his love for our country makes this exhibit especially meaningful, and we could not be more thrilled to have an eagle back at the Zoo," said Beth Heidorn, Racine Zoo executive director.

The new exhibit is just north of the zoo’s Andean bear yard and just south of the Great Horned Owl exhibit.

Years of planning, research, coordination, and construction went into the massive exhibit, designed to give the eagle plenty of room to explore and exhibit natural behaviors -- from flying from perch to perch to dipping into his own pond.

"Our facilities team absolutely knocked it out of the park with this exhibit," said Aszya Summers, curator of animal care and conservation education at the Racine Zoo. "I am so happy to welcome our eagle into his new home, and allow him to inspire people to protect birds like him in the wild."

Bald eagles dropped to fewer than 500 nesting pairs in the 1960s due to wide use of chemical pesticides. Thanks to new regulations and zoo-based breeding and reintroduction programs, there are now over 10,000 nesting pairs in the U.S. and bald eagles are no longer considered a threatened or endangered species. They are still a protected species by federal law to ensure their continued stability.

On Monday, May 31 -- Memorial Day -- at 11 a.m. there will be a ribbon cutting ceremony at the new eagle exhibit for the family of David A. Spaulding, "Skipper," to celebrate the Vietnam War veteran and his contribution to this amazing exhibit.

While things are going smoothly for the Racine Zoo’s newest addition, there is one thing missing -- a name. The zoo invites the community to bid on naming the eagle in an online silent auction. The auction will be open from Friday, May 21 through Thursday, May 27 at 7 p.m. The winner will be announced at the end of the auction closing. The name will be revealed at the ribbon-cutting ceremony.

Exclusive eagle apparel is also available for a limited time. Youth and adult shirts and sweatshirts are available in multiple colors. Funds raised by apparel sales will directly support the care of the eagle. For more information on the eagle, naming auction, or apparel, visit racinezoo.org.