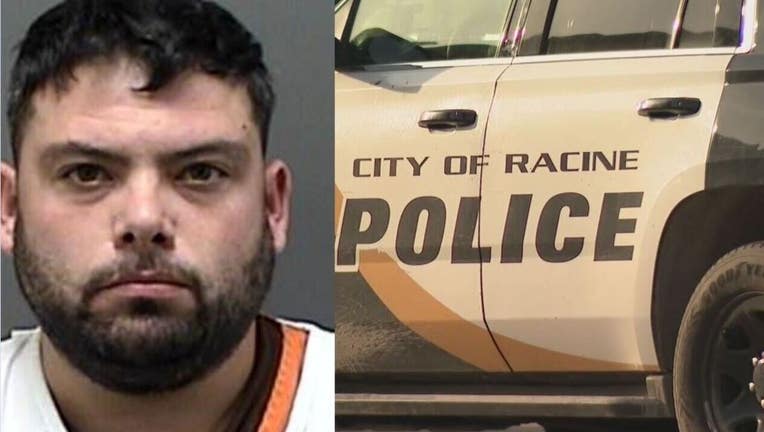 RACINE, Wis. - Steven Friebolin, 34, of Racine is charged with attempted first-degree intentional homicide, repeater, use of a dangerous weapon after prosecutors say he stabbed a man five times outside a barbershop on Lathrop Avenue in Racine. A man who said he owns the barbershop said the victim was the "main aggressor."

On Aug. 18, police responded to the Subway on Lathrop Avenue right next to the barbershop for a report of a large fight. They found a man bleeding from his upper body. He was taken to the hospital, where it was discovered he'd been stabbed five times.

People at the scene told investigators: "He's in the barbershop! He's Hispanic in a white T-shirt! He (expletive) stabbed him! Go get him!"

Police found Friebolin sitting in a chair inside the barbershop.

Investigators spoke with two women who said they were coming to Subway for food when they saw two groups arguing in the parking lot, and the argument became physical. One said a white man in a white shirt stabbed a Black man in a white shirt while the victim was trying to run away. The stabber then went back into the barbershop.

The second woman told investigators Friebolin acted like he was scared to fight the other group until he was handed what looked like scissors by a man who came out of the barbershop, according to the criminal complaint. At this point, Friebolin "acted all geek like he was hard" and stabbed the victim, telling the others, "I'll stab all ya'll (expletives)," prosecutors say.

The complaint says video showed Friebolin throwing punches at the Black man and spitting in his direction. It showed that two altercations seemingly merged; a second fight in front of the barbershop moved from the first fight Friebolin was involved in in the Subway lot. The second fight involved the stabbing victim and another man. According to the complaint, Friebolin approached the victim who was in a headlock and stabbed him from behind. The victim then broke free and ran.

Investigators spoke with a man who said he's part owner of the barbershop. He identified the stabbing victim as the main aggressor in this incident. Two days before the stabbing, the owner said the man who was later stabbed said, "(Expletive) you" to him, and the owner wasn't sure why. On the day of the stabbing, he said he saw the man leaving Subway, and Friebolin went outside and offered haircuts to the man and an acquaintance who was with him. At this point, according to the owner, the stabbing victim "became enraged and began yelling threats and racial slurs about white barbers." Friebolin and the owner then went inside and locked the door, the complaint says.

The owner said people outside were banging on the door and said they'd be back with guns, eventually returning with cars full of people, threatening and yelling at them. The owner said he and Friebolin tried to get them to leave when he was suddenly assaulted by one of them, taken off the ground and his necklace was ripped off. He said he was swung at and tried to fend a few people off before the fight ended. He added that he wasn't aware anyone had been stabbed.