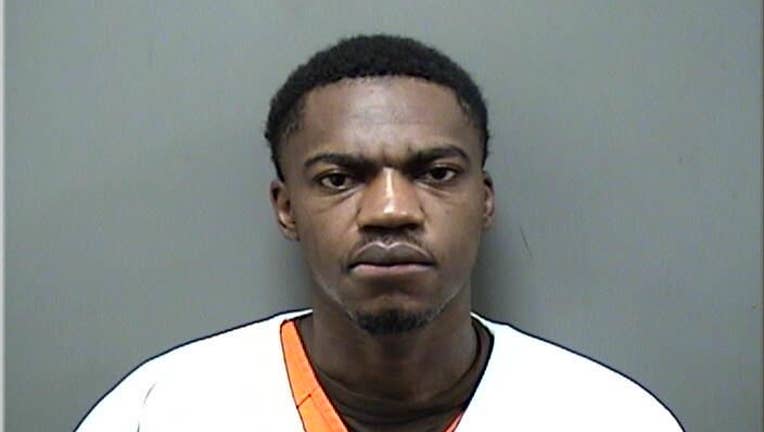 RACINE COUNTY, Wis. - Malik Kentle, 23, of Racine, faces multiple charges in connection with a shots fired incident at Lockwood Park in Mount Pleasant May 30. Prosecutors say surveillance cameras captured his vehicle at the scene, leading to his arrest.

Kentle faces three felonies and a misdemeanor: first-degree recklessly endangering safety, use of a dangerous weapon, repeater; possession of a firearm by a felon, repeater; sale/possess/use/transport machine guns, repeater and possession of THC, repeater.

Around 7 p.m. on May 30, 911 calls came in regarding shots fired at Lockwood Park. Officers found 27 casings in the street, along with numerous surveillance videos from the area.

According to a criminal complaint, video showed a silver Malibu Maxx near the park. Two men exited, wearing masks, cutting through yards toward the park. Where Oregon Street meets Lockwood Park, the men fired several shots with handguns before running north toward Westway Avenue.

One witness told officers they remembered seeing the men in the park "watching people," wearing masks and black hoodies with red writing saying, "Long live (name)." The witness said she thought the shooters were targeting "other gang bangers in the parking lot."

An investigation revealed distinguishing characteristics of the Malibu Maxx, including different colored wheels, a red sticker in the lower left corner of the truck lid, rust on the rear wheel well and others. According to prosecutors, investigators learned the vehicle had been stopped two days before the park shooting. Further investigation revealed it was at Scrub a Dub for an oil change the day before the shooting. Video showed Kentle was driving, according to prosecutors, and investigators also obtained an invoice signed by Kentle.

Investigators conducted surveillance on the vehicle and discovered "Kentle had consistently been the operator." At one point, according to the complaint, Kentle visited Durham's at Regency Mall and bought an M-16/AR-15 magazine, a forced grip for a rifle and a rifle sling. The complaint notes that Kentle is a convicted felon and thereby cannot possess a firearm or ammunition, but he can purchase gun accessories, adding that "the above three items are accessories which aid in shooting a rifle."

Cellphone records put Kentle's phone in the area near Lockwood Park at the time of the shooting, prosecutors say.

Additionally, investigators were able to tentatively match a casing from the Lockwood Park scene with a casing recovered during routine patrol near Kentle's home. The criminal complaint states Crime Lab testing is needed to confirm they match.

Kentle was arrested July 25, nearly two months after the park shooting, and the Malibu Maxx was impounded. A search of the vehicle revealed a ski mask, an empty 9mm Glock magazine, two sweatshirts -- one with "Long Live (name)" written on it and marijuana, along with items belonging to "Malik Kentle," according to the complaint.

Prosecutors say he "denied knowing anything about the Lockwood Park shots fired incident," and he "was not at Lockwood Park." He added that he "does not have a vehicle."

Kentle made his initial appearance in court Tuesday, Aug. 2. Cash bond was set at $50,000.