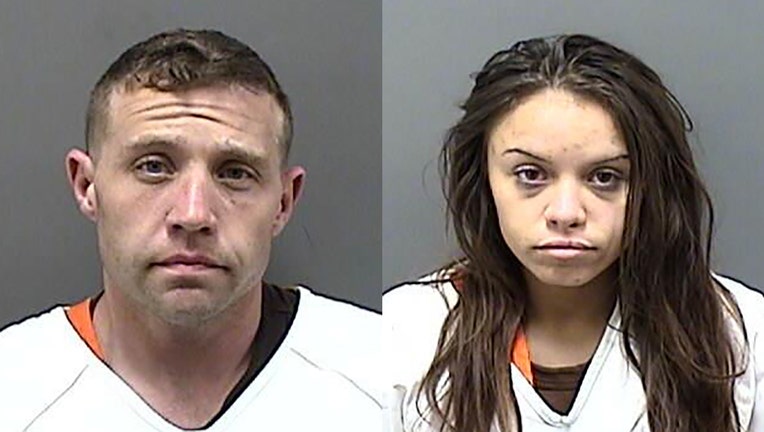 STURTEVANT, Wis. - An Illinois man and woman are charged with more than a dozen total counts after a Racine County business burglary report led to a vehicle search – uncovering drugs, counterfeit money and other items.

According to a criminal complaint, Racine County sheriff's deputies responded to a reported Sturtevant RV store burglary on Aug. 19.

Two witnesses at the scene told deputies that they saw a white pickup truck pulling a pontoon boat in front of two campers on the lot. The witnesses said the suspects opened all outdoor compartments on the campers. One of the suspects took a leather chair and put it into the boat, the complaint states.

Deputies with the Kenosha County Sheriff's Office later found and stopped the suspect pickup truck and spoke with the driver, Thomas Ayers, and passenger, Rebecca Perez. The boat was filled with yard furniture, the complaint states.

Additionally, a search of the vehicle uncovered, among other items:

In a statement to law enforcement, Ayers said he had bought the truck and boat that day and were driving back from Illinois. The complaint states Ayers admitted to being at the RV store, but denied going into any campers. Ayers changed his story while providing a statement, the complaint states, and denied knowledge of several items found in the vehicle.

Perez said in a statement that the methamphetamine and pipe were hers, and also provided information contrary to multiple aspects of Ayers statement, according to the complaint.

Ayers, 37, of Villa Park is charged with: burglary of a home or trailer home, misdemeanor theft, three counts of uttering a forgery, possession of methamphetamine, possession of drug paraphernalia, receiving stolen property.

Perez, 19, of Schiller Park is charged with: burglary of a motor home or trailer home, misdemeanor theft, uttering a forgery, possession of methamphetamine, possession of drug paraphernalia.

A woman in Marshfield, Wisconsin was simply waiting in line at a McDonald's drive-thru when she noticed a calf sitting in the back seat of a sedan.