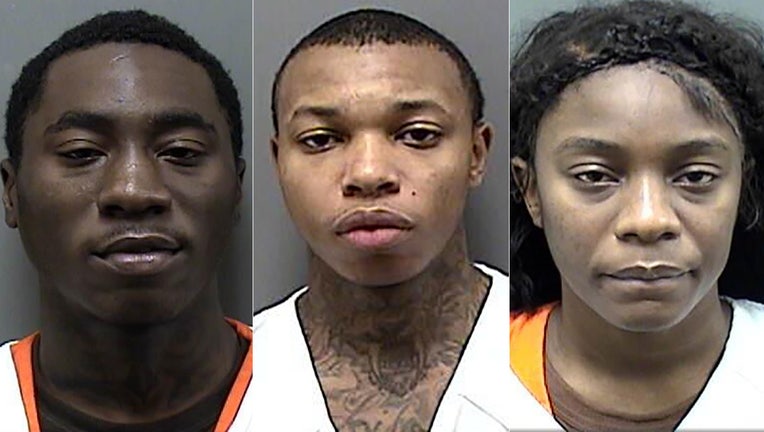 RACINE, Wis. - Three persons from Houston are facing multiple charges for allegedly stealing more than $136,000 from an ATM at a Racine Bank. The accused are Mannie Willis, Brandon Taylor, and Bryanna Blades – all 21 years old. They face the following criminal counts:

According to the criminal complaint, police officers responded to the Chase Bank on 21st Street in Racine shortly after 1 p.m. on Aug. 4 in reference to a robbery. Officers spoke with a man who was servicing ATMs at the bank. The complaint said he "noticed a male black with a black hooded winter jack and green mask" running towards him. He also noticed a second man running at him. Based on these actions, the worker said he feared for his safety and "backed away" from the ATM he was working on. The two males then removed cash from the ATM – and fled the scene.

The complaint indicates multiple surveillance cameras and a citizen's dash camera captured this crime -- and confirmed the ATM worker's story.

Based on the video surveillance, investigators were able to positively identify a vehicle involved as one with a Texas license plate. According to Chase Bank personnel, the suspects got away with more than $136,000 from the ATM, the complaint says.

Racine investigators reached out to jurisdictions throughout Wisconsin and Illinois on the suspect vehicle. Later on Aug. 4, Illinois State Patrol spotted the suspect vehicle and attempted a traffic stop. The vehicle fled from marked squads and led officers on a high-speed pursuit. The chase ended when the "suspect vehicle left the roadway and drove into a cornfield."

Two males fled the scene of the crash on foot. A woman, identified as Bryanna Blades, was also in the car and remained on the scene. She identified the two males who fled from their social media. One of them was Mannie Willis – the other was Brandon Taylor. Blades went on to say she and the two men were "driving north to commit the robberies," the complaint says. She said first they robbed a restaurant employee who was making a deposit in Northfield, Illinois. Then they went to Racine for the robbery at the Chase Bank. On Blades' phone, the complaint says police found "photos of black garbage bags full of money in the back seat of the car and the photos were taken after the robbery and text messages to friends indicating that they needed help and had plenty of money."

After a large, multi-jurisdictional search, Willis and Taylor were apprehended -- separately in cornfields.

Willis and Taylor made their initial appearances in Racine County court on Tuesday, Sept. 7. Cash bond was set at $100,000 for each of them. Both Willis and Taylor are due back in court for a preliminary hearing on Sept. 15.

As for Blades, she made her initial appearance in court on Aug. 24. Cash bond was set at $50,000. On Sept. 1, waived her right to a preliminary hearing -- and entered a plea of not guilty. Blades is due back in court on Oct. 19.

Parking dispute leads to gunfire near 22nd and Wisconsin: police

Marquette University police say a parking dispute near 22nd and Wisconsin Avenue led to one woman pulling out a gun and firing a shot into the air on Wednesday morning.

Proposed improvements along I-43 in Milwaukee, public meeting set

WisDOT is hosting a public meeting to discuss proposed improvements along I-43, from Brown Street to Capitol Drive, in the city of Milwaukee.