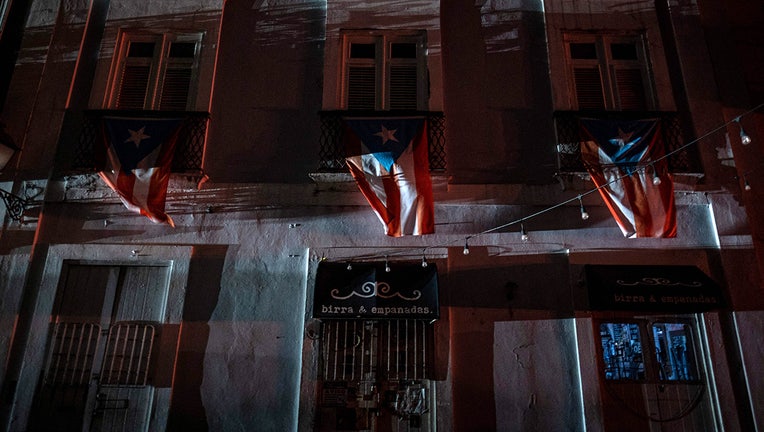 Puerto Rican flags hang from a balcony in San Juan, Puerto Rico after a major power outage hit the island on April 6, 2022. (Photo by RICARDO ARDUENGO/AFP via Getty Images)

Officials are now focused on investigating what exactly caused the failure of a circuit breaker at a substation within the Costa Sur power plant in southern Puerto Rico, one of four main plants in the U.S. territory.

"I know many in Puerto Rico are asking, ‘How is it that this happened?’" said Wayne Stensby, CEO of Luma, a company that took over transmission and distribution for the Puerto Rico’s Electric Power Authority last year. "There’s no question the electricity grid in Puerto Rico is incredibly fragile."

The blackout outraged and worried many on the island of 3.2 million people, including those who cannot afford generators and have medical conditions including diabetes and respiratory issues that depend on electricity for their treatments.

The outage snarled traffic, shuttered businesses and forced some people to sleep outdoors given the heat.

Customers angry over the extended outage noted they have been hit with recent increases in their power bills, and people complained the blackout damaged electrical appliances and forced them to throw out groceries as the island struggles to emerge from a more than decade-long economic crisis.

Gary Soto, director of Luma project system operations, said another outage occurred just days after the blackout that affected 25% of customers due to a new failure at another power plant involving a boiler that crews had recently repaired.

Shay Bahramirad, an engineering vice president, said a third party will look into the failure of the circuit breaker, noting that the blackout occurred 19 seconds after the initial fault was recorded. She said equipment at the power plant where the fire occurred dates from 1969 to the mid-1970s, although she declined to provide details including maintenance records on the failed circuit breaker, saying it would be taken out of context.

It was not immediately known what maintenance, if any, Luma had performed on the circuit breaker once it took over operations of Puerto Rico's transmission and distribution last June.

When asked several times whether maintenance on the circuit breaker was delayed, the company’s CEO said, "We are not going to speculate." Stensby said independent third parties would be responsible for the investigation and the structural testing and engineering design to rebuild the damaged area.

The outage comes as Puerto Rico’s Electric Power Company tries to emerge from a bankruptcy-like process and restructure some $9 billion in debt. The utility has long struggled with corruption, mismanagement and a lack of investment in the electric grid, which Hurricane Maria razed in 2017. Emergency repairs were made at the time, but reconstruction projects have yet to start.

In addition, a series of strong earthquakes that hit southern Puerto Rico in late 2019 and early 2020 damaged the Costa Sur plant and other infrastructure.

Prior to Hurricane Maria, a fire at another power plant sparked an island-wide blackout in September 2016. A large fire in June last year at a substation in the capital of San Juan left hundreds of thousands of clients without power.