(CNN) -- A pro-gun billboard that features images of Native Americans is drawing both contempt and support in Colorado.

"Turn in your arms. The government will take care of you," the sign says.

While the sarcasm is evident, the group behind the message is not. 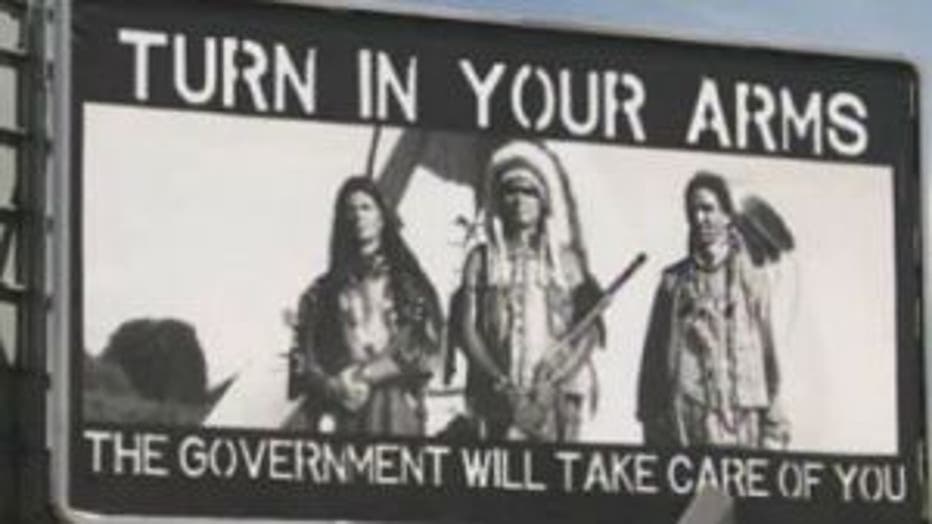 Lamar Advertising, the company that owns the billboard, told CNN affiliate KUSA that the group who paid for the message wants to remain anonymous.

Regardless, the billboard has outraged some residents in Greeley, about 50 miles north of Denver.

"I personally do not own a gun. I don't feel the need to, but for those that do, that is their right," Salazar said.

"My hope would be is that they can just take the picture down, leave the saying. ... Believe me, I get it."

"Where can we send a check to support more?" he asked.

Some say the billboard makes light of the cruelties the federal government inflicted on Native Americans.

Maureen Brucker told the Greeley Tribune the billboard reminded her of the horrors of the Wounded Knee Massacre on the Pine Ridge Reservation in 1890.

According to a historical reports, a few hundred Sioux left their reservation to visit a dying chief. The Sioux surrendered quietly to troops, who disarmed almost all of them.

But a scuffle broke out over one man's rifle. A shot rang out from the group of struggling men, and soldiers with machine guns fired into the Native Americans, who were armed only with clubs and knives. An estimated 150 to 200 Native Americans were killed, including dozens of women and children -- some miles away from the camp. A few dozen soldiers were reportedly killed.

Brucker told the Tribune she thinks those behind the billboard should talk about their views openly.

"I thought it was pretty cowardly that someone would put something like that up and spend the money for a billboard but didn't have the courage to put their name on it," she said.