WASHINGTON — President Donald Trump weighed in on an investigation into scandal-plagued Wells Fargo, tweeting Friday that fines and penalties against the bank would not be dropped, and may actually be "substantially increased."

President Trump's statement comes a day after Reuters reported that Mick Mulvaney, the president's budget director and now acting director of the Consumer Financial Protection Bureau, was weighing whether the bank should have to pay tens of millions in fines already levied against it for mortgage lending abuses. 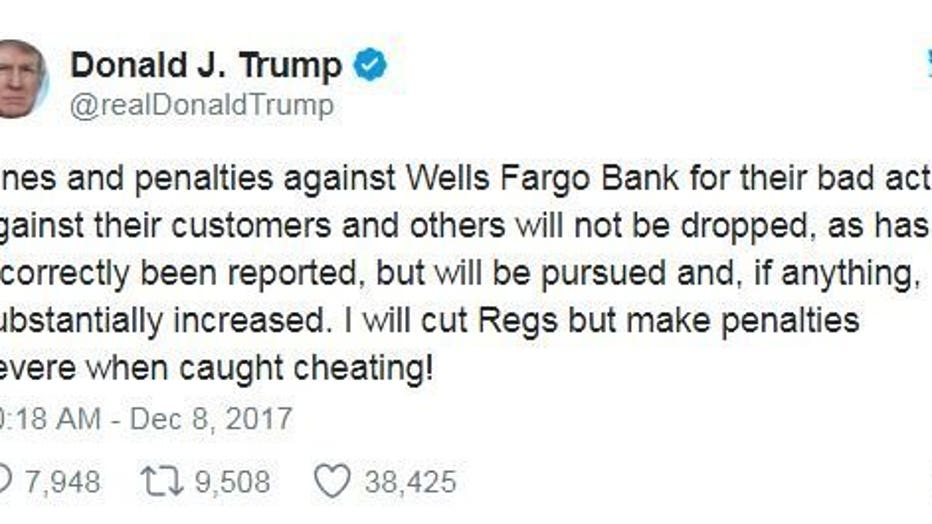 President Donald Trump tweeted about the fines and penalties against Wells Fargo Banks.

Wells Fargo, the nation's largest mortgage lender, has offered refunds to customers this year after acknowledging that its mortgage bankers unfairly charged them fees to lock in interest rates on mortgages. It's just one of a number of legal problems the San Francisco-based bank is facing, most notably a scheme in which bank employees opened more than 3 million fake accounts in order to meet sales quotas. Wells Fargo employees also tacked on insurance for auto loan customers who did not need it, in some cases leading to defaults and repossessions.

The CFPB under previous director, Richard Cordray, was considering additional fines and penalties against Wells Fargo, but the investigation was frozen last month after Cordray resigned from federal watchdog agency, and Mulvaney took over.

President Trump tweeted that the fines and penalties for the bank's "bad acts against their customers ... will not be dropped, as has incorrectly been reported, but will be pursued and, if anything, substantially increased."

The mortgage scandal impacted roughly 100,000 customers, which is substantially less than the number of customers who were give fake accounts, or who were stuck with unneeded auto insurance.

Wells Fargo & Co. had been fined $100 million by the CFPB, which at the time was the largest fine the agency had ever individually brought against a bank.

While President Trump signaled a tough hand against Wells Fargo, his appointments and recent actions have been more industry-friendly. Before his appointment, Mulvaney was a well-known critic of the CFPB saying the bureau had too much power with not enough oversight. President Trump is likely to appoint a more business-friendly permanent director to the CFPB once he makes the announcement.

Earlier this year, President Trump signed a bill to overrule new regulations written by the CFPB that would have allowed bank customers to band together to sue their banks, banning what's known as mandatory arbitration agreements. There is now a push to get Congress to veto another set of new regulations proposed by the CFPB that would intensely regulate the payday lending industry as well.

"This tweet is nothing more than an empty promise," said Amanda Werner with Americans for Financial Reform, a liberal-leaning consumer advocacy group.