"We are not going to let the United States be taken advantage of anymore," President Trump told CEOs on the sidelines of the Asia-Pacific Economic Cooperation conference. "I am always going to put America first, the same way that I expect all of you in this room to put your countries first."

The president — who pulled the United States out of the Pacific Rim trade pact known as the Trans-Pacific Partnership — said the U.S. would no longer join "large agreements that tie our hands, surrender our sovereignty and make meaningful enforcement practically impossible." 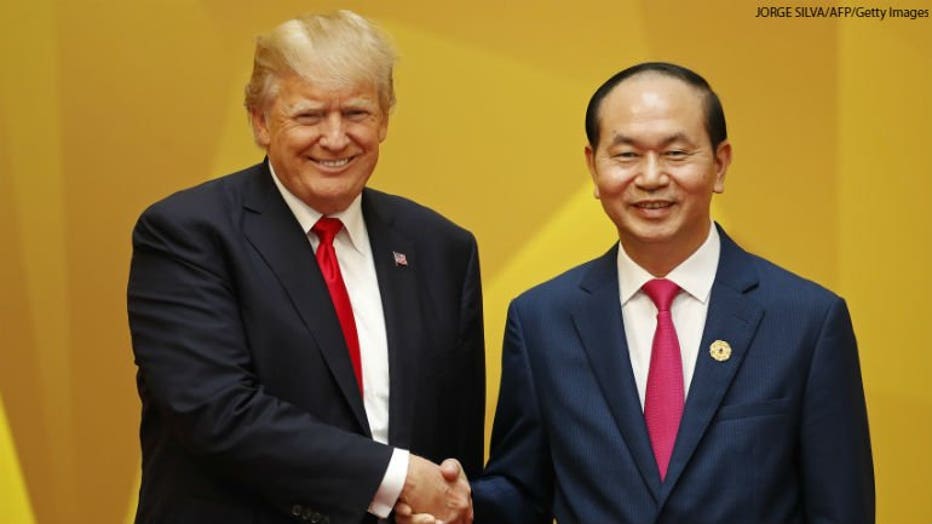 Instead, he said, the U.S. will pursue one-on-one trade deals with other nations that pledge fair and reciprocal trade.

As for China, President Trump said he'd spoken "openly and directly" with Xi about the nation's abusive trade practices and "the enormous trade deficits they have produced with the United States."

It was a stark change in tone from the day before, when President Trump was Xi's guest of honor during a state visit in Beijing. There, President Trump opted for flattering Xi and blaming past U.S. presidents for the trade deficit.

President Trump said China's trade surplus, which stood at $223 billion for the first 10 months of the year, was unacceptable. He repeated his language from Thursday, when he said he did "not blame China" or any other country "for taking advantage of the United States on trade."

But President Trump added forceful complaints about "the audacious theft of intellectual property," ''massive subsidizing of industries through colossal state-owned enterprises," and American companies being targeted by "state-affiliated actors for economic gain."

U.S. officials have raised similar concerns in the past about China, especially with regard to intellectual property.

On Saturday, President Trump opened a day of meetings with leaders of the 21-member APEC countries. Later in the day, he was to fly to Hanoi, the capital, to attend a state banquet before formal meetings Sunday with Vietnam's president and prime minister.

Behind the scenes, White House officials quietly negotiated with the Kremlin over whether President Trump and Russian President Vladimir Putin would hold a formal meeting on the sidelines in Danang, with the Russians raising expectations for such a session.

As speculation built, the two sides tried to craft the framework of a deal that President Trump and Putin could announce in a formal bilateral meeting, according to two administration officials not authorized to speak publicly about private discussions.

Though North Korea and the Ukraine had been discussed, the two sides focused on trying to strike an agreement about a path to resolve Syria's civil war once the Islamic State group is defeated, according to officials. But the talks stalled and, just minutes before Air Force One touched down in Vietnam, White House Press Secretary Sarah Huckabee Sanders told reporters that the meeting was off.

When asked about the outcome, Russian Foreign Minister Sergei Lavrov later snapped at reporters: "Why are you asking me? Ask the Americans."

Putin spokesman Dmitry Peskov said that even without a formal meeting, "Both presidents are in town, and their paths will cross one way or another."

That they did Friday night during the summit's welcome gala: The two men, each wearing traditional Vietnamese shifts, shook hands and greeted one another as they stood side-by-side for the group photo of world leaders.

In a major breakthrough, trade ministers from 11 nations remaining in the Trans-Pacific Partnership — representing roughly 13.5 percent of the global economy — said Saturday they had reached a deal to proceed with the free-trade pact after it was thrown into doubt when President Trump abandoned it.

Separately, a 16-member region-wide pact called the Regional Comprehensive Economic Partnership was also under negotiation. It encompasses China and India but also does not include the U.S.