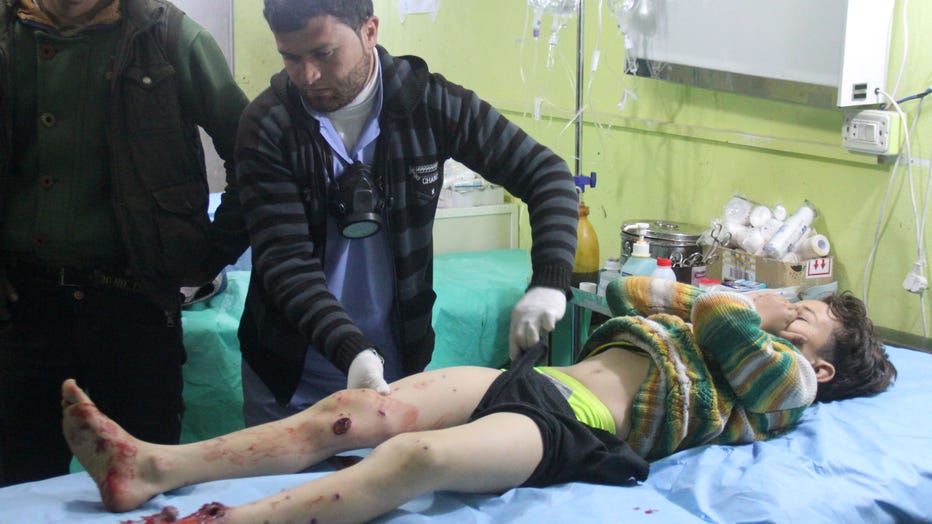 “Many lines beyond the red line” crossed

President Donald Trump blamed a Tuesday chemical attack in a northern rebel-held area of Syria on the country’s embattled President Bashar al-Assad, adding that the carnage — which killed nearly 100, including more than two dozen children — changed his opinion of the regime. President Trump’s comments have infuriated Syrian allies, but encouraged Assad’s long-time critics.

During a Wednesday press conference, President Trump — whose administration just last week insisted that removing Assad from power was not a priority — called the toxic gas attack an “affront to humanity” that forced him to rethink his handling of U.S. foreign policy toward the civil war-ravaged nation.

“When you kill innocent children, innocent babies, little babies with a chemical gas … that crosses many lines beyond the red line. Many, many lines,” he told reporters during the joint news conference with Jordan’s King Abdullah II. “My attitude toward Syria and Assad has changed very much.”

“These heinous actions by the Assad regime cannot be tolerated,” he added.

The victims were killed by sarin, a nerve agent banned under international law, Turkish health officials conducting autopsies on some of the victims announced Thursday.

President Trump did not provide any details about the U.S.’s future relations with Syria — which has been in a civil war for six years — nor did he outline any possible actions against the Assad regime. When asked if his strategy now includes military operations to remove Assad from power, President Trump refused to comment. “Militarily, I don’t like to say where I’m going,” he said.

“These heinous actions by the Bashar al-Assad regime are a consequence of the past administration’s weakness and irresolution,” President Trump said in a statement. “President Obama said in 2012 that he would establish a ‘red line’ against the use of chemical weapons and then did nothing.”

Syria’s civil war erupted in 2011, when pro-democracy protesters — inspired by the Arab Spring protests budding throughout the Middle East that had already forced out Egyptian and Tunisian leaders — began demonstrating against Assad, who has been in power since 2000 (and who took over for his father, who ruled Syria for the 30 years before that). The regime fought back with police and military force, and the conflict developed into a full-fledged civil war as militia groups sprang up to oppose the government.

Amid the protests, the Islamic State militant group (ISIS) — an al Qaeda offshoot operating in Iraq at the time — launched its own campaign against the Assad regime in a bid to gain control of the country.

The Assad regime, ISIS, and multiple oppositional forces have been struggling for power ever since. The conflict has killed about 400,000 Syrians, according to the United Nations, and forced nearly 5 million people to flee the nation as refugees. Another 6.3 million people have been forced from their homes but remain in Syria.

Chemical weapons have frequently been deployed amid the fighting, and the Assad regime is usually blamed. For example, an August 2013 sarin attack killed more than 1,300 people. Another attack in 2014, which used less-deadly but still-dangerous chlorine gas, wounded at least 100 people. Each time, Assad’s regime and the rebels have blamed each other.

Tuesday’s chemical attack was one of the worst in the nation’s history, killing at least 86 people, including at least 26 children and babies, humanitarian groups reported. Assad, again, skirted blame for it.

Foreign powers have long disagreed on the best way to handle the Syrian civil war, and this latest chemical attack has made the diplomatic conflict even more tense.

Many European countries, including Germany, have insisted that Assad must be taken out of power to achieve peace in Syria.

Germany was anxious President Trump’s administration suggested it may not prioritize removing Assad’s regime and would instead focus on defeating ISIS. Sigmar Gabriel, Germany’s foreign minister, said the comments "irritated us in Europe at the time” — but on Wednesday, he said President  Trump’s new condemnation of Assad is “positive.”

Meanwhile, Russia — which has long supported Assad and has been backing his regime’s ground troops with bombers — bashed President Trump for his anti-Assad comments. The Russian government has insisted this attack is not the government’s fault, and blamed the gas seepage on an accidental detonation in the rebel’s chemical weapon stockpile.

“This is a dangerous and heinous crime but it’s hasty to put labels on it,” Russian President Vladimir Putin’s spokesman Dmitry Peskov said.

The U.N. Security Council is considering a resolution condemning the Assad regime for the attack — but Russia, unsurprisingly, objected to it during a Wednesday session. This opposition prompted an emotional response from U.S. ambassador to the U.N. Nikki Haley. “How many more children have to die before Russia cares?” she asked, holding up pictures of wounded Syrian babies.

The resolution would place blame on Syria’s government and insist that it be “held accountable,” but provides no details on how it would do so. Haley warned that the U.S. may take action against Syria if the U.N. doesn’t act.

“When the United Nations consistently fails in its duty to act collectively, there are times in the life of states that we are compelled to take our own action,” she said.

She did not specify what that action may be — but it could make the U.S.’s relationship with pro-Syria Russia tenser.

"We have to deal with the U.S. as it is, with its own interests that it tries to impose on the rest of the world,” Sergei Karaganov, a former Putin foreign policy adviser, told Bloomberg. “So we’ll have to be ready to strictly contain them if they try again to go beyond the realm of polite behavior.”