WASHINGTON — George H.W. Bush was celebrated with high praise and loving humor Wednesday as the nation bade farewell to the man who was America's 41st president and the last to fight for the U.S. in wartime. Three former presidents looked on at Washington National Cathedral and a fourth — George W. Bush — eulogized his dad.

The congregation, filled with foreign leaders and diplomats, Americans of high office and others touched by Bush's life, rose for the arrival of the casket, accompanied by clergy of faiths from around the world. In their row together, President Donald Trump and former Presidents Barack Obama, Jimmy Carter and Bill Clinton stood with their spouses and all placed their hands over their hearts.

Bush was "the last great-soldier statesman," historian Jon Meacham said in his eulogy, "our shield" in dangerous times. On a light note, he added that Bush, campaigning in a crowd in a department store, once shook hands with a mannequin. Rather than flushing in embarrassment, he simply cracked, "Never know. Gotta ask." 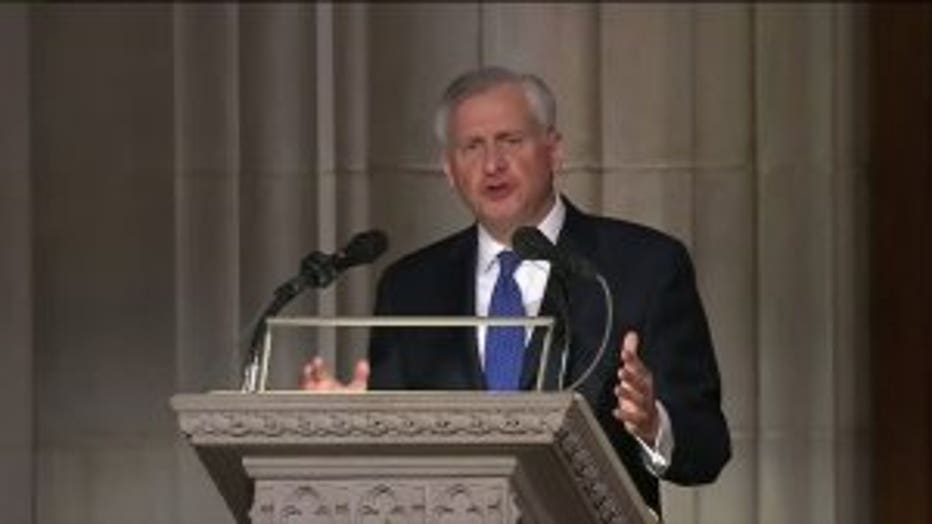 Meacham also praised Bush's call to volunteerism — his "1,000 points of light" — placing it alongside Abraham Lincoln's call to honor "the better angels of our nature" in the American rhetorical canon. Meacham called those lines "companion verses in America's national hymn."

President Trump had mocked "1,000 points of light" last summer at a rally, saying "What the hell is that? Has anyone ever figured that one out? And it was put out by a Republican, wasn't it?"

The national funeral service capped three days of remembrance in Washington before Bush's remains return to Texas on Wednesday for burial Thursday.

A military band played "Hail to the Chief" as Bush's casket was carried down the steps of the U.S. Capitol, where he had lain in state. Family members looked on as servicemen fired off a cannon salute. 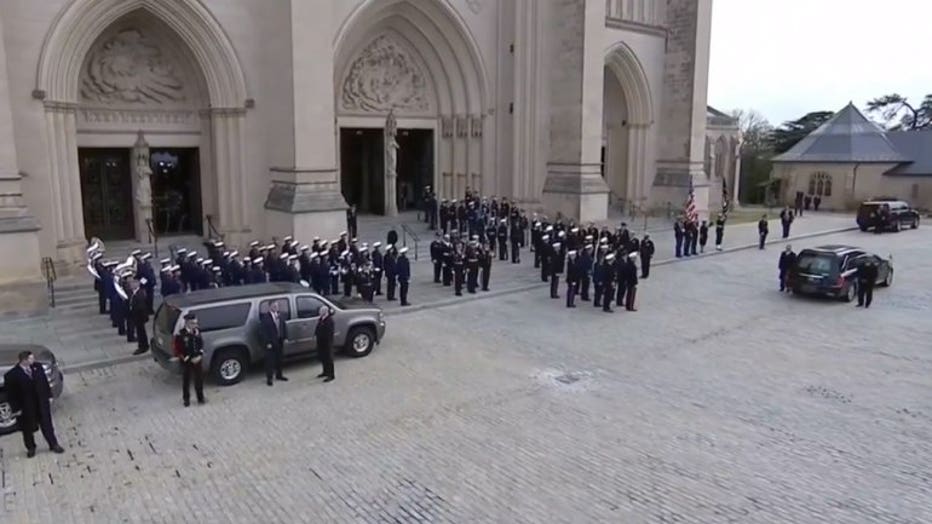 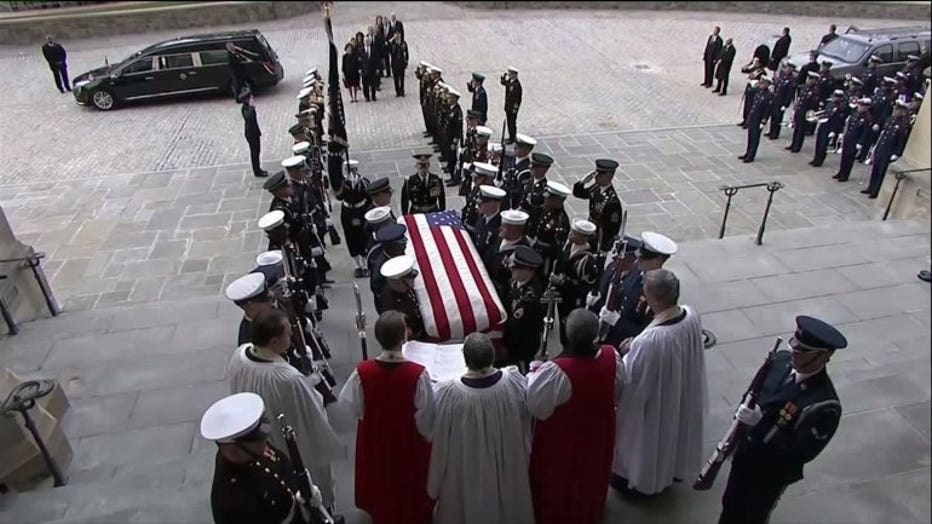 His hearse was then driven in a motorcade to the cathedral ceremony, slowing in front of the White House. Bush's route was lined with people much of the way, bundled in winter hats and taking photos.

Waiting for his arrival inside, President Trump shook hands with Obama and former first lady Michelle Obama, who greeted him by saying "Good morning." President Trump did not shake hands with Bill and Hillary Clinton, who looked straight ahead. 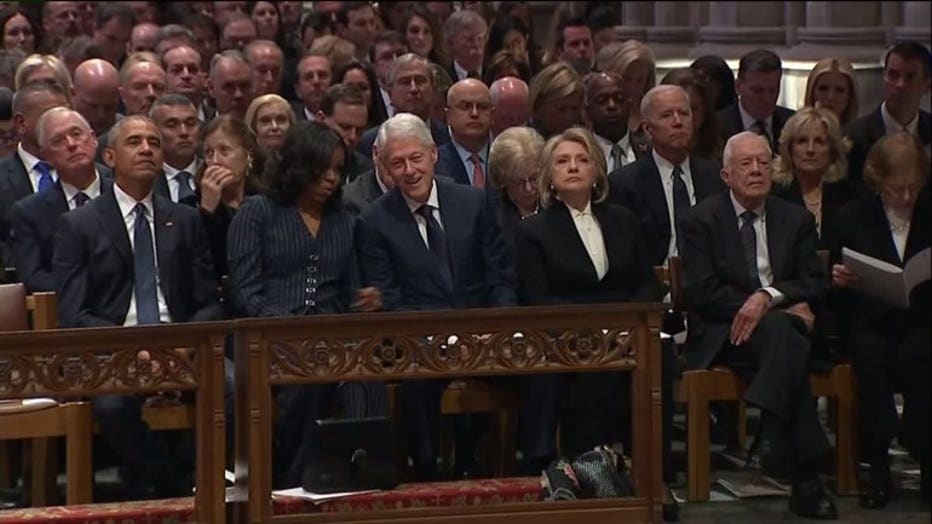 President Trump tweeted Wednesday that the day marked "a celebration for a great man who has led a long and distinguished life." Trump and his wife took their seats after the others, briefly greeting the Obamas seated next to them.

Also expected in the invitation-only crowd: Mike Lovejoy, a Kennebunkport electrician and fix-it man who has worked at Bush's Maine summer estate since 1990 and says he was shocked and heartened to be asked to come.

On Tuesday, soldiers, citizens in wheelchairs and long lines of others on foot wound through the Capitol Rotunda to view Bush's casket and honor a president whose legacy included World War military service and a landmark law affirming the rights of the disabled. Former Sen. Bob Dole, a compatriot in war, peace and political struggle, steadied himself out of his wheelchair and saluted his old friend and one-time rival.

After the national funeral service at the cathedral, Bush's remains will be returned to Houston to lie in repose at St. Martin's Episcopal Church before burial Thursday at his family plot on the presidential library grounds at Texas A&M University in College Station. His final resting place will be alongside Barbara Bush, his wife of 73 years who died in April, and Robin Bush, the daughter they lost to leukemia in 1953 at age 3.

President Trump ordered the federal government closed Wednesday for a national day of mourning. Flags on public buildings are flying at half-staff for 30 days.

As at notable moments in his life, Bush brought together Republicans and Democrats in his death, and not only the VIPs.

Members of the public who never voted for the man waited in the same long lines as the rest, attesting that Bush possessed the dignity and grace that deserved to be remembered by their presence on a cold overcast day in the capital.

"I'm just here to pay my respects," said Jane Hernandez, a retired physician in the heavily Democratic city and suburbs. "I wasn't the biggest fan of his presidency, but all in all he was a good, sincere guy doing a really hard job as best he could."

Bush's service dog, Sully, was taken to the viewing, too — his main service these last months since Barbara Bush's death in April being to rest his head on her husband's lap. Service dogs are trained to do that.

The CIA also honored Bush, the only spy chief to become president, as three agency directors past and present joined the public in the viewing.

In the midst of the period of mourning, first lady Melania Trump gave Laura Bush, one of her predecessors, a tour of holiday decorations at the White House, a "sweet visit during this somber week," as Mrs. Bush's Instagram account put it. And the Trumps visited members of the Bush family at the Blair House presidential guesthouse, where they are staying. Former President George W. Bush and his wife greeted the Trumps outside before everyone went in for the private, 20-minute visit.

Although President Trump will attend Bush's service, he is not among the eulogists. They are, in addition to Bush's eldest son, Alan Simpson, the former senator and acerbic wit from Wyoming; Brian Mulroney, the former Canadian prime minister who also gave a eulogy for Ronald Reagan; and presidential historian Jon Meacham. 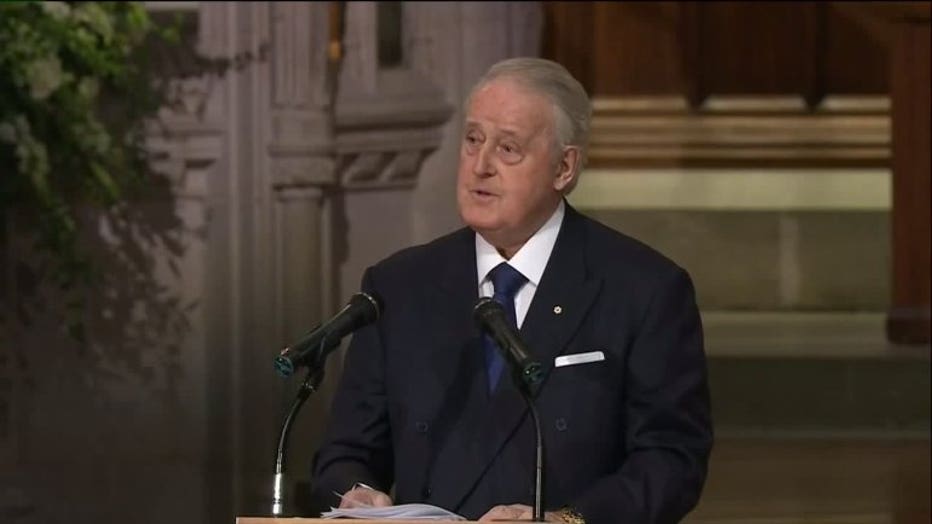 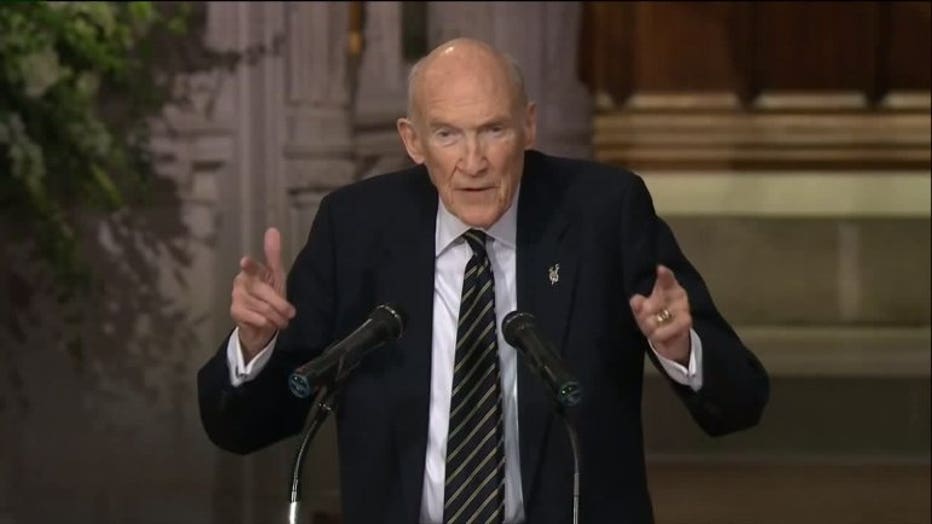 People lined up before dawn to pay respects to the 41st president, a son and father of privilege now celebrated by everyday citizens for his common courtesies and depth of experience.

"He was so qualified, and I think he was just a decent man," said Sharon Terry, touring Washington with friends from an Indianapolis garden club. Said her friend Sue Miller, also in line for the viewing: "I actually think I underestimated him when he was in office. My opinion of him went up seeing how he conducted himself as a statesman afterward."

Fred Curry, one of the few African-Americans in line, is a registered Democrat from Hyattsville, Maryland, who voted for Bush in 1988, the election won by the one-term president. "Honestly I just liked him," he said. "He seemed like a sincere and decent man and you couldn't argue with his qualifications." 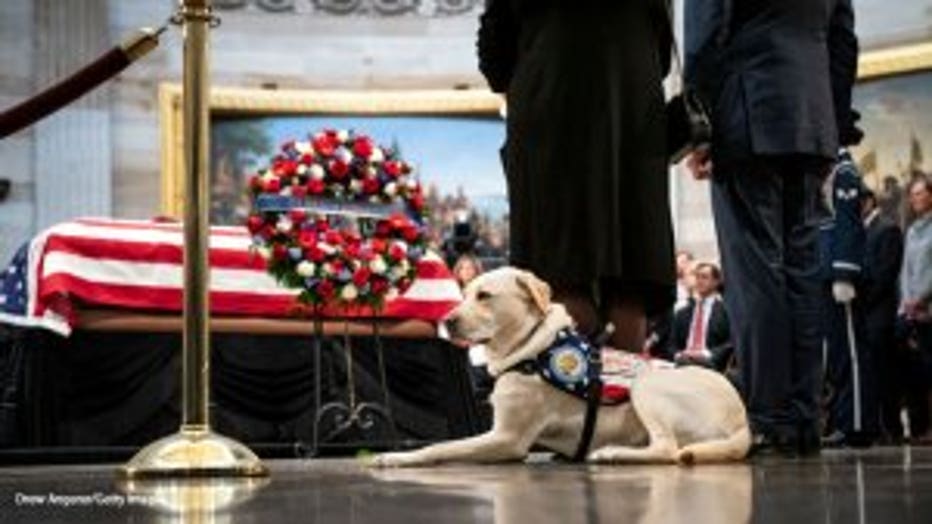 Inside the Capitol, Sully, the 2-year-old Labrador retriever assigned to Bush, sat by the casket in the company of people who came to commemorate Bush's signing of the Americans with Disabilities Act, the 1990 law that, among its many provisions, required businesses that prohibit pets to give access to service dogs.

"After Mrs. Bush's death, general companionship was a big part of Sully's job," John Miller, president and CEO of America's VetDogs, said in a phone interview. "One of the things that I think was important to the president was the rest command, where Sully would rest his head on the president's lap."

The law was just one point of intersection for Bush and Dole, now 95, who was one of its leading advocates in the Senate.

They were fellow World War II veterans, Republican Party leaders, fierce rivals for the 1988 Republican presidential nomination won by Bush ("Stop lying about my record," Dole snapped at Bush) and skilled negotiators. Dole, an Army veteran hit by German machine gunfire in Italy, has gone through life with a disabled right arm. Bush, a Navy pilot, survived a bail-out from his stricken aircraft over the Pacific and an earlier crash landing. 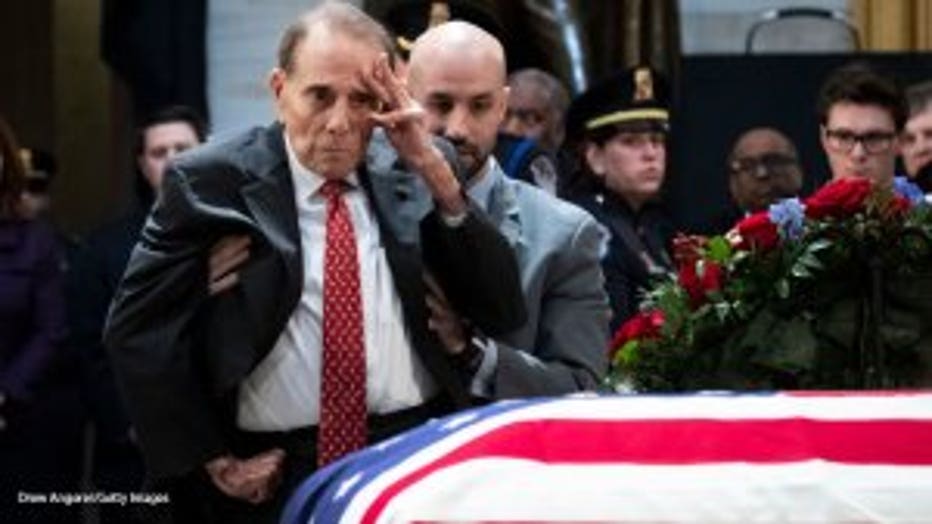 WASHINGTON, DC - DECEMBER 4: Former Senator Bob Dole stands up and salutes the casket of the late former President George H.W. Bush as he lies in state at the U.S. Capitol, December 4, 2018 in Washington, DC. A WWII combat veteran, Bush served as a m

On Tuesday, Dole was helped out of his wheelchair by an aide, slowly steadied himself and saluted Bush with his left hand, his chin quivering.

Dignitaries had come forward on Monday, too, to honor the Texan whose service to his country extended three quarters of a century, from World War II through his final years as an advocate for volunteerism and relief for people displaced by natural disaster. Bush, 94, died Friday.

Trump's relationship with the Bush family has been tense. The current president mocked the elder Bush for his "thousand points of light" call to volunteerism, challenged his son's legacy as president and trounced "low-energy" Jeb Bush in the Republican presidential primaries en route to office. The late President Bush called Trump a "blowhard."

Those insults have been set aside, but the list of funeral service speakers marked the first time since Lyndon Johnson's death in 1973 that a sitting president was not tapped to eulogize a late president. (Clinton did so for Richard Nixon, and George W. Bush eulogized Ronald Reagan and Gerald Ford.) 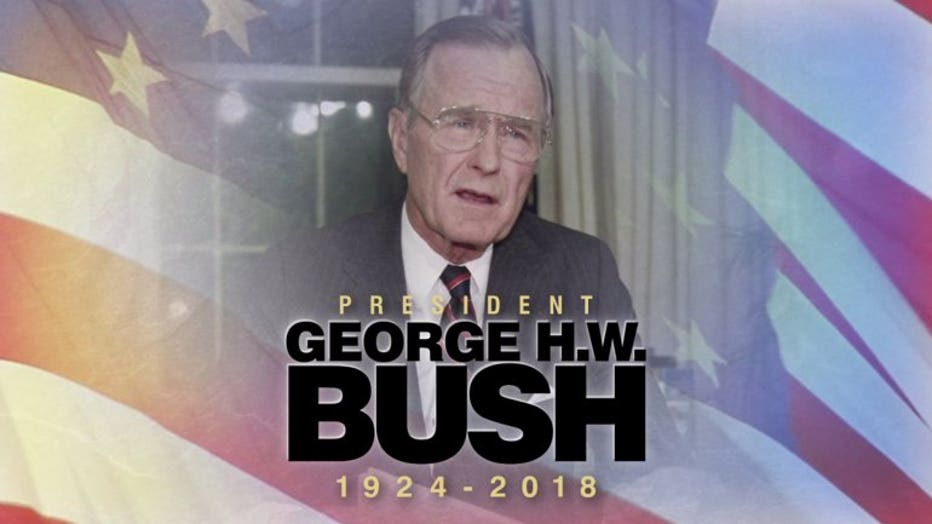