Political analysis on the balance of power

FOX 5 political analyst Lori Geary looks at what is at stake in the balance of power with the Senate runoffs.

ATLANTA - President-elect Joe Biden and Vice-President Elect Kamala Harris will return to Georgia to campaign for Senate candidates Jon Ossoff and Rev. Raphael Warnock to rally Democrats ahead of Jan. 5 runoffs to determine control of the U.S. Senate.

According to a news release sent to FOX 5, Harris will campaign in Savannah, Georgia on January 3. Then on January 4, Biden will visit Atlanta.

Loeffler was appointed in December 2019 by Gov. Brian Kemp to fill the seat left vacant by Sen. Johnny Isakson who stepped down due to personal health concerns. Loeffler then assumed office in January of this year. 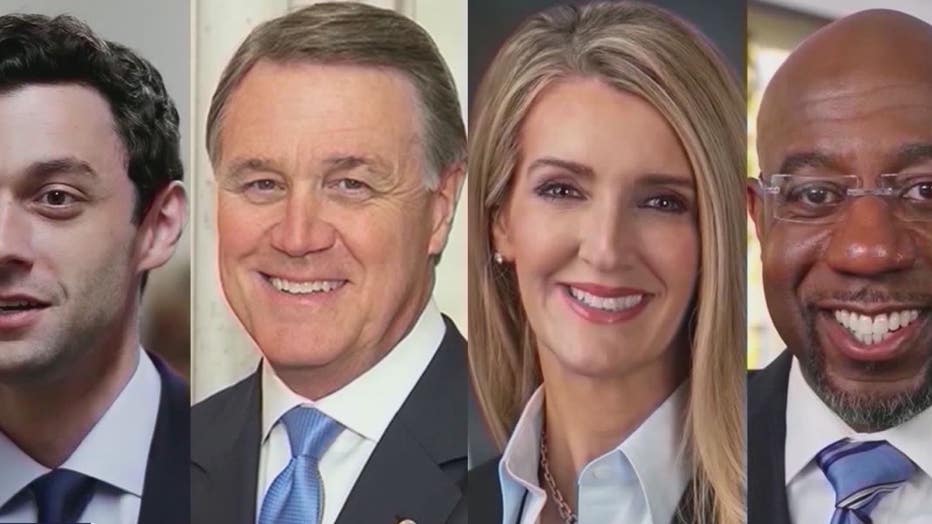 Biden and Harris have visited Georgia several times, both prior to the November general election and as recently as earlier this month.

On December 14, the President-Elect held a rally in Atlanta and asked supporters who were parked in cars at the Pratt Pullman Yard in northeast Atlanta to ride the momentum of the November election that led to Biden's 12,000 vote win over President Donald Trump.

In a one-on-one interview with FOX 5 after the rally, Biden explained why winning the two Senate seats would help him accomplish some of his goals more quickly.

Expect big names to visit Georgia just after the first of the year as Senate runoff campaigns enter the finals days.

Trump made the announcement in a Tweet, saying that he will be "having a big rally for them" the day before the runoff election on Jan. 5.

During the December 19 announcement, the president also continued to voice his displeasure with Gov. Brian Kemp and Georgia Secretary of State Brad Raffensperger.

Previously, the president called Kemp a "fool" and a "clown" and told FOX News that he was "ashamed" to have endorsed him in 2018.

Then on late Tuesday night, Trump once again took to Twitter to further attack Kemp and Raffensperger after learning of the results of a third ballot signature audit which reaffirmed the state's election results.

The Secretary of State's Office announced the results of the absentee ballot audit which was conducted with assistance from the GBI. The audit found no evidence of voter fraud.

Audit finds no evidence of voter fraud in Georgia

Georgia's Secretary of State's Office has released the results of a signature match audit in Cobb County.

Kemp has rebuffed Trump’s call for a special session of the legislature to subvert the election results, while Raffensperger has repeatedly said there is no evidence of systemic fraud or irregularities in the November election.

Recent polling shows the candidates within just one percentage point of each other in both races.

Perdue is polling at 49 percent to Ossoff's 48 percent, with 3 percent of voters undecided.

Warnock is polling at  49 percent to Loeffler's 47 percent, with 3 percent of voters undecided.

GET MORE 2020 YOU DECIDE COVERAGE

FOX 5 political analyst Lori Geary sits down with FOX 5 anchors Russ Spencer and Courtney Bryant to talk about the final days of the Senate runoff campaigns and how President Donald Trump's tweets calling for Georgia Governor Brian Kemp to resign could impact it.

The January runoffs are critical for both parties because they will determine the balance of power in the U.S. Senate.

Republicans need to win both seats to maintain their current majority in the chamber. If Democrats win, they will control the Senate, along with the House of Representatives and the White House.

VOTING IN GEORGIA 2020: Registering to vote, absentee ballots, and more

The three weeks of early voting are set to end this week. Over 1.2 million voters have requested absentee ballots.