WASHINGTON — President Donald Trump on Saturday lamented the "devastating" attack by a shooter on a Pittsburgh synagogue, saying it lays bare the "hate in our country" and speculating that the deadly violence would have been curbed if the building had had an armed guard.

With both the death toll and details of the synagogue's security still to be disclosed, President Trump said gun control "has little to do with it" but "if they had protection inside, the results would have been far better."

President Trump responded before boarding Air Force One for a speech in Indiana and promised a fuller statement after his arrival. 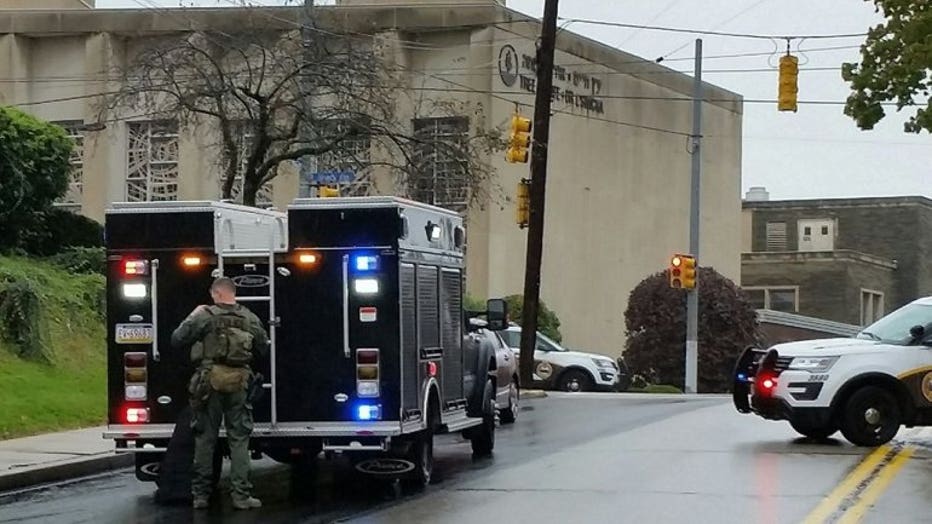 ***Embargo: Pittsburgh, PA**Authorities responded to a shooting Saturday morning near the Tree of Life synagogue in Pittsburgh, according to Allegheny County Sheriff's Deputy Kevin Kraus.

Authorities said the gunman opened fire during a baby-naming ceremony Saturday morning at the Tree of Life Congregation in Pittsburgh's Squirrel Hill neighborhood. The attack is being investigated as a hate crime.

"This is a case where, if they had an armed guard inside, they might have been able to stop him immediately," President Trump said. "Maybe there would have been nobody killed, except for him, frankly. So it's a very, very - a very difficult situation."

In previous mass shootings, President Trump has at times said he would consider tightening certain gun controls but in the main has called for more armed guards in places such as schools.

"The world is a violent world," he said Saturday. "And you think when you're over it, it just sort of goes away, but then it comes back in the form of a madman, a wacko. ... They had a maniac walk in and they didn't have any protection and that is just so sad to see, so sad to see."

President Trump said lawmakers "should very much bring the death penalty into vogue" and people who kill in places such as synagogues and churches "really should suffer the ultimate price."