MILWAUKEE -- University of Wisconsin-Milwaukee Professor Emeritus Mordecai Lee described a testy interview between Senator Ron Johnson and Chuck Todd on "Meet the Press" Sunday, Oct. 6 as Washington at its worst.

The back and forth lasted more than nine minutes, with Senator Johnson and Todd engaged in a heated argument.

When pressed on a quote featured in the Wall Street Journal that Senator Johnson winced at the suggestion that military aid might be linked to Ukraine's willingness to investigate President Donald Trump's political rival Joe Biden, Senator Johnson replied by suggesting President Trump had been set up. Senator Johnson also said the media had presented a false narrative.

"No you don't," said Senator Johnson. "You set this thing up. Totally biased." 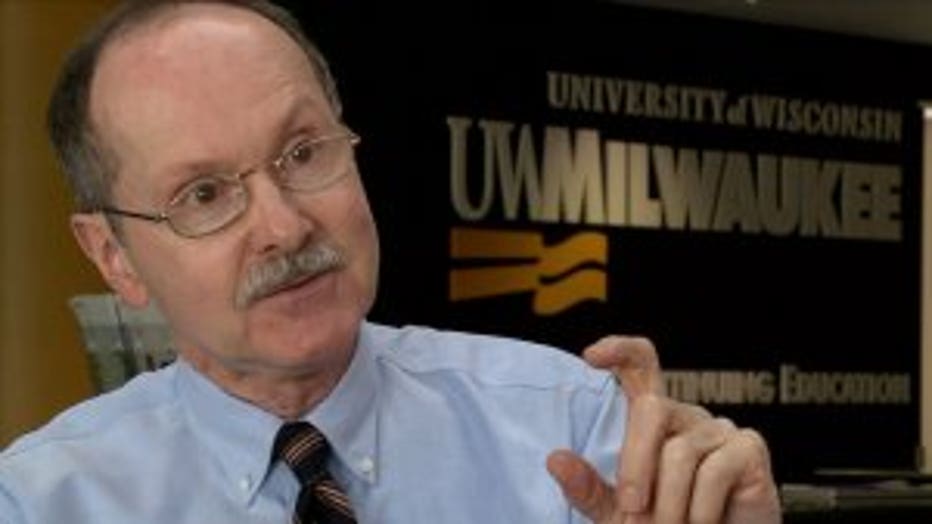 "This interview is the ultimate example of how bad things have gotten in Washington," said Lee.

Lee said Senator Johnson engaged in what he called, "What about ism," an approach used by members of both parties -- pointing the finger at others' bad acts, rather than answering to the current claim.

"He did everything he could to not talk about it," said Lee. "We've got a political world where double standards are OK."

It's a tactic that could backfire with more Americans turning down the volume because they're tired of the political noise.

"After a while, we all get sort of saturated," said Lee. 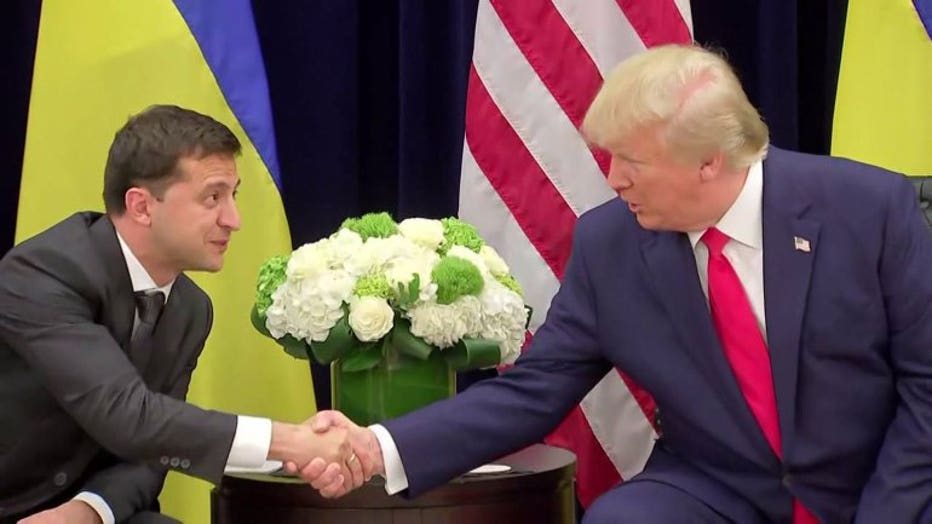 FOX6 News reached out to Senator Johnson Monday to talk about the "Meet the Press" interview. Officials with his office said he wasn't in the area, and sent a statement that included a transcript of the interview Sunday with Chuck Todd:

"Johnson, chairman of the Senate Foreign Relations Committee’s Subcommittee on Europe and Regional Security Cooperation, also discussed how he spoke with President Trump prior to his early September trip to meet with Ukrainian President Volodymyr Zelensky. Johnson said President Trump was adamant that there was no “quid pro quo” related to military aid to Ukraine, and adamant as well that his concern was with endemic corruption in Ukraine and European nations’ failure to do their part in providing support and aid to Ukraine."

"Johnson said the president also was concerned about Ukraine’s cooperation with the ongoing investigation into the origins of the now-debunked collusion narrative that was used against the incoming President Trump from December 2016 onward. Johnson cited reporting — in Politico and The Hill  — from 2017 onward about possible involvement of the Democratic National Committee and the Clinton campaign with corrupt players in Ukraine to undermine the Trump campaign and, later, transition."

TODD: Let me start with something you told the Wall Street Journal late last week. You said Gordon Sondland seemed to imply that the frozen military aid was connected to promise by Zelensky for investigations. You said, at that suggestion, “I winced. My reaction was, ‘Oh, God, I don't want to see those two things combined.’” Why did you wince? And what did you mean by “those two things combined”?

SEN. JOHNSON: Well, first of all, your set-up piece was typically very unbiased. Let me first, before I start answering all the detailed questions, let me just talk about why I am pretty sympathetic with what President Trump has gone through. I am 64 years old. I have never in my lifetime seen a president, after being elected, not having some measure of well wishes from his opponents. I've never seen a president’s administration be sabotaged from the day after election. I've never seen no measure of honeymoon whatsoever. So what President Trump’s had to endure – a false accusation. By the way, you’ve got John Brennan on: You ought to ask Director Brennan what did Peter Strzok mean when he texted Lisa Page on Dec. 15, 2016: Quote …

TODD: This has to do with Ukraine …

SEN. JOHNSON: “… Think our sisters have begun leaking like mad, scorned and worried and political, they’re kicking it into ....”

TODD: What does it have to do with Ukraine?

SEN. JOHNSON: It has everything to do with Ukraine. Now, listen: “Think our sisters have begun leaking like mad. Scorned and worried and political, they’re kicking into overdrive.” Now, that was December 15th. Six days before that is when we first start hearing the CIA leaking about Russia supporting the Trump campaign. That is why Trump is so upset. He had this false narrative that resulted in him being set up by James Comey on January 16th. Then he has a special counsel appointed that has hampered his entire administration and now once he's been … that was proven false --

SEN. JOHNSON: It is not. Because this is underlying exactly why President Trump is upset  and why his supporters are upset at the news media. Chuck, here’s the deal --

TODD: OK, this is not about the media. Senator Johnson, please. Please. Can we please answer the question that I asked you instead of trying to make Donald Trump feel better here that you are not criticizing him.

SEN. JOHNSON: I'm not. I’m not. I’m just trying to lay the groundwork after your very biased opening.

TODD: -- that somehow there was an implication that military aid was being frozen because the president wanted an investigation. Why did you wince?

SEN. JOHNSON: Because I didn't want those connected. And I was supporting the aid, as is Senator Murphy, as is everybody that went to that initial inauguration. But here's the salient point of why I came forward. When I asked the president about that, he completely denied it. He adamantly denied it, he vehemently, angrily denied it. He said, “I'd never do that.” That is the piece of the puzzle I'm here to report today, that, unlike the narrative of the press that President Trump wants to dig up dirt on his 2020 opponent, what he wants is he wants an accounting of what happened in 2016. Who set him up? Did things spring from Ukraine? There is a good piece that we’ve got an oversight letter on, from Politico in 2017 -- let me quote the article. It says, Ukrainian government officials tried to help Hillary Clinton and undermine Trump. They did so by disseminating documents implicating a top Trump aide in corruption, suggesting they were investigating the matter. Ukrainian officials also reportedly helped Clinton allies research damaging information on Trump and his advisers. There is potential interference in the 2016 campaign –

TODD: Let me ask you this –

SEN. JOHNSON: That's what Trump wants to get to the bottom of. But the press doesn't want to –

TODD: I understand that a way to avoid answering a question is to attack us in the press. I'm well aware of that.

SEN. JOHNSON: No. No. I'm trying to lay the groundwork in order to answer your question.

TODD: Let me tell you what Ambassador Volker said under oath. And I'm curious if you shared this concern. Ambassador Volker said this: “I explained that I believed that Mayor Giuliani continues to have a negative view of Ukraine based on assertion of actions that happened in 2016 and that this viewpoint is likely making its way to the president.” Were you concerned that Rudy Giuliani's disinformation campaign, sort of, Ukrainian propaganda campaign, was negatively influencing the president's views of the current Ukrainian president?

SEN. JOHNSON: Well, certainly the reports, not only from Rudy Giuliani but from Ken Vogel out of Politico and John Solomon, doing some pretty good investigative reporting -- now the Washington Post is attacking him, undermining him – all that information: We have never gotten to the answers to those questions. Chuck, I want to get to the truth. I’m not here defending the president. I’m not here to denounce him, either. What I’m here is I'm telling you my piece of the puzzle here, giving you my honest assessment of what I heard, how the president told me repeatedly in the May 23rd Oval Office visit, on the phone on the 31st, the reason he had very legitimate concerns and reservations about Ukraine is, first, corruption, generalized, it's endemic. We all know that. And then specifically about what kind of interference there was in the 2016 election --

TODD: Do you think Paul Manafort was framed --

SEN. JOHNSON: -- and also, and also, the fact that Europe was not stepping up the plate.

TODD: Do you think Paul Manafort was framed?

SEN. JOHNSON: No, obviously, he was convicted. There was a lot of other stuff going on back then, too. You know, Hillary Clinton's campaign was searching for dirt, maybe not only on Paul Manafort but trying to keep Vice President Biden out of the primary for the Democratic campaign. So again, Chuck, the bottom line is there are so many questions unanswered. So again, ask John Brennan what did Peter Strzok mean when “The sisters begun leaking like mad”? What was the CIA scorned and worried about? What were they kicking into overdrive? There is one key question I want answered among, I don’t know, about a hundred others.

TODD: Senator, do you not believe the Russians interfered in the presidential elections to benefit Donald Trump?

TODD: You don't trust the FBI, the CIA?

SEN. JOHNSON: No, no, I don't. Absolutely not. After Peter Strzok and Lisa Page? After James Comey, Peter Strzok, John Brennan?

TODD: You believe the FBI and the CIA --

SEN. JOHNSON: No, I didn't trust them back then.

TODD: And you don't trust them now?

TODD: None of them have come to any of the conclusions you are trying to come to. I'm curious, do you trust them now?

SEN. JOHNSON: Now, who are you talking about?

TODD: The CIA and the FBI.

TODD: Senator, let me ask you this.

SEN. JOHNSON: I’ve got a lot of questions that remain unanswered. I just want the truth, Chuck.

TODD: So would I.

SEN. JOHNSON: I want to truth. No, you set this thing up totally biased. I could never really get into the full narrative. We don't have enough time to go through all the things I can talk about in terms of my interactions with the president.

TODD: You’re right, because you came here and chose to bring up something about Lisa Page and Peter Strzok.

SEN. JOHNSON: No, you started the piece with something incredibly biased, that I would never be able to get the truth out.

TODD: Senator, I don't know why you just came on here to personally attack the press and avoid answering questions about what’s happened here.

SEN. JOHNSON: Because of your set-up piece.

TODD: You are making a choice not to believe the investigations that have taken place, multiple.

SEN. JOHNSON: No, I'm trying to get to the truth. I want to look at the entire truth, Chuck. The media doesn't.

TODD: And the truth is only when it benefits -- when you believe it is politically comfortable with you?

SEN. JOHNSON: No, you are totally false. You’re totally incorrect. I want the complete truth.

SEN. JOHNSON: I doubt that.

TODD: I'm sorry that you chose to come on this way, senator. Thanks very much.

SEN. JOHNSON: And I’m sorry you started your piece that way."